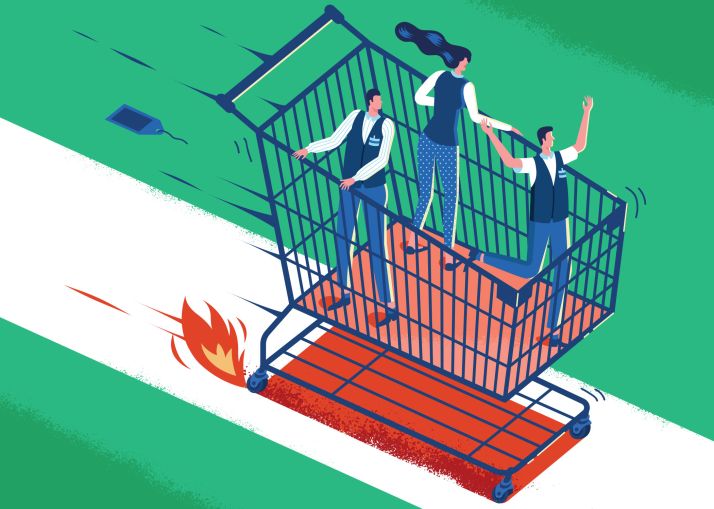 As the economy adjusts, former retail workers could be in for a painful transition. Illustration: Marcin Mokierów-Czołowski

A s the glow from a spend-happy holiday season wears off, traditional retail may be taking a turn toward the doldrums once more.

After finishing 2017 back up near its highs from two years earlier, the S&P Retail Select index exed out about 10 percent of its value last week, although it has recovered somewhat since then. And Amazon announced last week that its Prime members will soon be able to order free deliveries from Whole Foods in some cities, perhaps nailing the final stake in the heart of in-person grocery shopping. (FreshDirect hammered plenty of previous stakes.)

Meanwhile, Jacksonville, Fla.-based retailer Stein Mart sent investors running when it announced it would begin to “identify potential strategic alternatives” to its business model, clouding the future of its nearly 300 stores.

Lots of ink has been spilled over the nightmares of over leveraged mall developers and investors in the physical spaces that retailers have long called home. Surely the terror is even worse for workers who depend on retail wages for their livelihood?

Not so fast, experts say.

At a high level, at least, economists are relatively optimistic on the fates of the legions of people the industry employs. Retail is declining gradually, they say, and the economy has been reabsorbing the fallout from archaic industries since the beginning of time.

“There’s a tendency to think that the brick-and-mortar retail assets will disappear. That’s very unlikely,” said John Pencavel, an economics professor at Stanford University who studies labor markets. “Employment may fall, but it won’t fall to zero.”

Robert Valletta, an economist at the San Francisco Federal Reserve, agreed with that sunny sentiment—though not without concern that in an industry that employs dense proportions of workers, some who get cut from payrolls will fare better than others.

“The retail sector is somewhat labor intensive, but these workers are largely getting absorbed into other industries,” said Valletta said. “The challenges really arise where workers have a very specialized skill set.”

Retail, he observed, employs everyone from grocery baggers and stock boys to business analysts and Fortune-500 CEOs. As the industry sheds workers, those with an expertise closely tailored to brick-and-mortar sales work—think designers of window dressing—may face some challenges finding new careers.

“But from salespeople, who have to have people skills, to the more specialized accounting staff—all of those people have fairly general skills that will be useful in a range of other industries,” Valletta said.

Summer jobs at department stores or supermarkets have long been an important way for millions of Americans to add the first lines to their résumés. Even so, even young workers with no experience should have little trouble finding other entry points to the labor market. Valletta sees early career workers increasingly earning opportunities to provide services, rather than sell goods.

“For young people, [retail] is a way station for many of them,” he said, just a short stop on the way to a career elsewhere. “Leisure and hospitality sectors have been steadily expanding. Instead of the jewelry store, it’s the bed and breakfast. If not in Walmart, it’s at a hotel chain. As some jobs are destroyed, others get created.”

Still, even if a great migration of workers can go off without a hitch, the scope of the sector’s employment is massive.

More than 2 million Americans—including over half a million who are younger than 25—work in department stores and discount stores, according to data from the Department of Labor. A million more work in clothing stores and shoe stores. Combine that bunch with jewelers, booksellers, office suppliers and grocers, and the sum climbs to nearly 17 million—almost 10 percent of the U.S. labor force.

Some economists speculate that e-commerce—the force, after all, that many see as retail’s death sentence—could help rebalance employment by absorbing former cashiers and managers into distribution and warehouse professions. But for those industries to offer a significant balm, they would have to expand tremendously. Warehouses only employ about 600,000 today, with another 750,000 who work as couriers or messengers.

And both those fields have been far less attractive to female workers than jobs in stores. Nearly half of retail workers are women, compared with only about 30 percent of employees who work in distribution.

Heidi Schierholz, the policy director at the progressive-leaning Economic Policy Institute, worried that the sector’s decline could hit especially hard not only for women but also for black and Hispanic workers.

As a result, any labor-market hardship might drag down those demographics more adversely.

“When there is evolution in the labor market—even though I don’t think it affects the overall number of jobs—you can have individuals who are displaced from work who face big economic consequences,” Schierholz said.

Still, Pencavel argued that it might be too soon to worry about any job losses at all. Even in the face of a new technology—like e-commerce—that threatens to make old professions obsolete, work responsibilities can evolve such that the human touch remains invaluable.

Pencavel pointed to the counterintuitive experience of bank tellers in the late 20th century as ATMs seemed to threaten their viability.

“At the time, there were many predictions that these bank tellers are going to be put out of work by the ATMs. In fact, at least up to last year—30 or 40 years after the ATMs came in—there were more bank tellers than there were in the 1970s,” the economist recounted.

The Department of Labor’s projections back up that prognosis. The agency predicts the number of retail workers will actually creep up over the next decade, rising about a third of a percent by 2026.

That’s not to say that the job won’t change. As stores have desperately tried to cut costs, retail analyst Kate Newlin has observed a marked decline in the talent and ambition of workers plying showrooms and sales floors.

“It’s horribly degraded,” Newlin said. “They got rid of the great salespeople because they couldn’t afford the commission, and they replaced them with people willing to work for minimum wage. Nobody wants this job anymore.”

But as more promising careers in other sectors lure workers elsewhere, shoppers’ loss may be the economy’s gain. The median annual wage for retail salespeople is just over $22,000. On the other hand, workers who move into the country’s fastest growing occupations—renewable energy installers—can expect to bring home about 75 percent more.

Even if those jobs require more skill than stocking shelves, Valletta, the Fed economist, is optimistic the workforce will be up to snuff.

“Educational attainment has been rising—more and more people are going to college,” he said. “And everybody grows up knowing how to use a computer.”

Besides—for those consumers who didn’t—old fashioned shopping still has its charms.

Pencavel, 74, whose first job was as a milk delivery boy in 1950s London, said he uses Amazon to buy books if he knows what he’s looking for. Otherwise, he still enjoys making the trip to Kepler’s Books in Menlo Park, Calif., about two miles north of Stanford’s campus.

“When I’m not sure what I want, I still like to do some browsing,” he said.