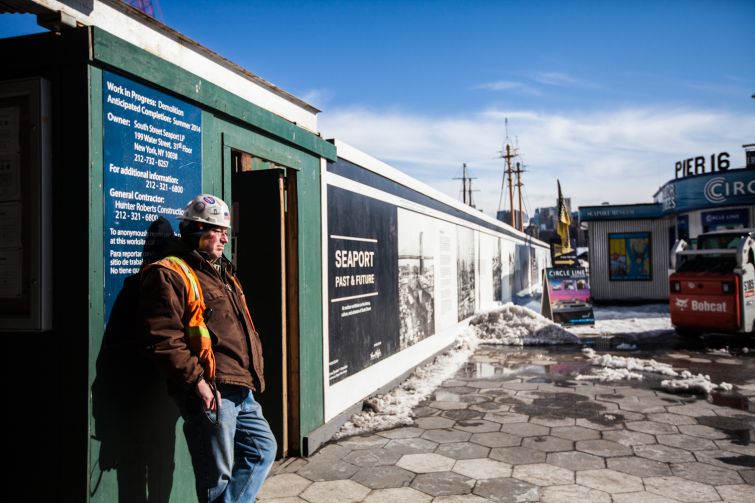 New York City’s construction industry still has a lot of work to do to become more diversified. In fact, the composition of its workforce is moving in the wrong direction.

The number of minority construction workers (those that identified as black, Hispanic or Asian) decreased by 5.4 percent to 147,917 employees in 2016 compared with 156,303 employees in 2015, according to Commercial Observer’s calculations based on data in a fresh New York Building Congress workforce report.

Non-white workers in 2016 represented 59.1 percent of the total 250,270 employees, a 2.4 percent decrease from 2015 when minorities made up 61.5 percent of the 253,984-person construction industry, according to the report, which analyzed data from the United States Census Bureau’s American Community Survey. (The 2016 figures, which count both white and blue collar workers, is the most recent data available.)

Meanwhile, the number of white workers, which make up 40 percent of the construction industry, increased 4.7 percent to 100,326 from 95,841 employees over the year. (Also there was an increase in the number of people who identified as two or more races in 2016 to 2,027 construction workers from 1,840 year-over-year.)

“I think we all recognize that we are working towards diversification, but we have work to do,” Carlo Scissura, the president and CEO of the Building Congress, told CO. “We are going to be looking at a lot of [minority and women-owned business enterprise] issues, and work with elected officials to engage more in the community. And we’ll partner with women’s and minority groups—some that are doing mentoring—to make sure that we are in the high schools and colleges to get them excited about the [construction] fields.”

Besides the diversity gap, the construction industry also has an issue with the financial stability of its workers.

This helps explains why only 6 percent of construction workers live in pricey Manhattan. According to the report, 39 percent of employees live in Queens, 32 percent reside in Brooklyn, 14 percent dwell in the Bronx and the remaining 9 percent live in Staten Island.

“Do we want wages higher? Of course we do. But is it well above minimum wage? Yes,” Scissura said.

If the typical person worked for 40 hours a week at the current $12 per hour minimum wage of New York State, his annual salary would be nearly $25,000. (The state is raising the minimum wage threshold to $15 per hour by the end of next year.)

Gary LaBarbera, the president of the Building and Construction Trades Council of Greater New York which represents more than 100,000 unionized construction workers in the city, blamed nonunion companies for the low wages and slumping diversity numbers. He pointed to a 2017 Economic Policy Institute report that reflected while minorities made up 55.1 percent of the union workforce, non-whites took 61.8 percent of union apprenticeship programs. That report also highlights that union workers make more money than nonunion workers.

“We are incredibly proud of the continued diversification of the unionized construction industry,” LaBarbera said in a statement to CO. “It’s unfortunate that the nonunion sector has effectively engaged in a race to the bottom with wages anywhere from $12 to $15 per hour, which has been responsible for depressing wages overall. Meanwhile, the unionized construction industry has historically been a gateway to the middle class and it remains so today.”​

Brian Sampson, the head of the Associated Builders and Contractors‘ Empire State Chapter which represents nonunion employers, struck back.

“It’s a well-argued fact that the majority of the public work in New York City is being performed by the unions and that on a pure dollars standpoint that public work is a large part of the overall construction market,” he said. “The building trades leadership likes to claim that more than 80 percent of the work being done in New York City is being done but the unions. If that’s the case, then they have to own 80 percent of what’s in that report. You can’t have your cake and eat it too. That report reflects their workforce.”

Adding fuel to the fire is the fact that only 55 percent of construction workers reported having health insurance in 2016, leaving nearly half without, according to the Building Congress report. But Scissura said the reasons behind this are unclear.

But he added: “It’s a problem. It’s another thing that the industry needs to work on.”