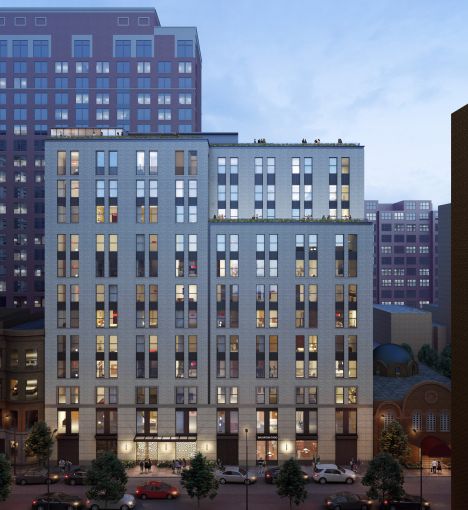 Bank of the Ozarks provided the debt—which has a three-year term—while The Davis Companies provided equity in the transaction. The equity amount couldn’t be determined by press time.

“We are thrilled to be partners in this real estate project, which will be designed contextually to reflect Brooklyn Heights’ authentic neighborhood look and feel,” Quentin Reynolds, The Davis Companies’ the managing director of acquisitions, said. “It’s also the perfect landing point for families who want convenient access to Lower Manhattan with proximity to nine subway lines and connectivity throughout all of New York City.”

A three-story, 32,000-square-foot health center in its current form, the building will shortly be redeveloped into a 86,000-square-foot, 12-story structure comprising 59 luxury residential units and 3,000 square feet of retail space. Eugene Colberg is the project’s architect.

“High-quality sponsors continue to find lenders who will give them favorable terms for projects like 70 Schermerhorn Street,” Schwartz said. “As the city center continues to expand, developers and residents are taking advantage of relative discounts in areas like Brooklyn Heights, driving demand for luxury condos.”

The Real Deal reported last August that Orange Management and Lonicera had filed plans to develop the project with New York City’s Department of Buildings.

Lonicera, together with Quinlan Development, has another luxury rental development underway at 157 Remsen Street—a mere three blocks away from 70 Schermerhorn Street—as previously reported by CO.

Officials at Bank of the Ozarks declined to comment. Officials at Lonicera Partners and Orange Management did not immediately return a request for comment.