Barneys Shuttering Upper West Side Store After More Than a Decade 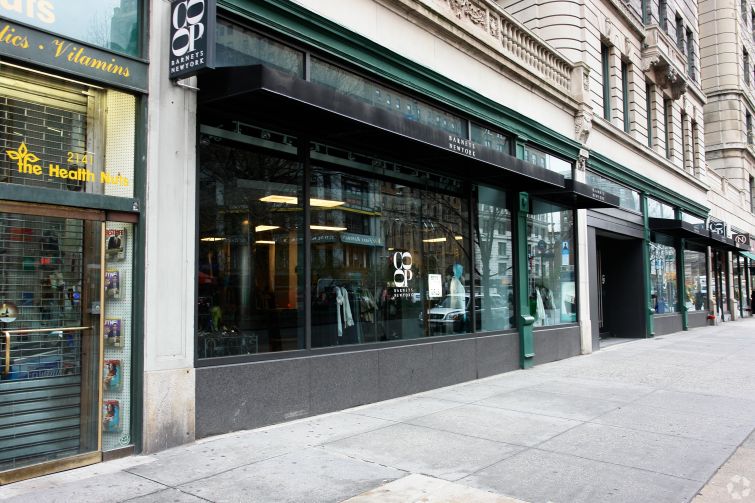 Barneys New York is closing its Upper West Side store store on Feb. 18, a company spokeswoman confirmed to Commercial Observer.

“Barneys New York has enjoyed serving the community on the Upper West Side for over a decade. We sincerely appreciate the loyalty of our customers, and we look forward to continuing to serve them at our Madison, Downtown and Brooklyn locations,” the spokeswoman emailed.

West Side Rag first reported the news on Feb. 2 based on information provided by a manager.

The roughly 10,000-square-foot clothing store, which is on the ground and lower levels at 2151 Broadway between West 75th and West 76th Streets, opened in 2004, according to retail broker Faith Hope Consolo of Douglas Elliman Real Estate, who represented the landlord in the original lease negotiations with Barneys. The space underwent a renovation in July 2013, which included rebranding it from a Co-op store—selling lower-price fashion—to a Barneys New York. (The company has converted Co-ops stores to Barneys New York shops.) The lease is slated to expire at the end of 2023, according to CoStar Group.

Once it shutters, there will be two remaining Barneys stores in Manhattan: one at 660 Madison Avenue between East 60th and East 61st Streets and one at 101 Seventh Avenue between West 16th and West 17th Streets.

“This is a big loss for the Upper West Side,” Consolo said. The deal was unique at the time as most retailers were focused on Columbus Avenue, but Barneys took a Broadway space.

Broker John Brod, a partner at ABS Partners Real Estate, said the news is of no surprise.

“Customers can go on line at Bonobos, UNTUCKit, Allbirds, Amazon, Suitsupply and manufacturers’ own online e-commerce store to purchase the same merchandise so the need for Barneys to have a brick-and-mortar presence has past,” Brod emailed. “Specifically, Barneys is a multi-brand retailer and as such the need for a second store in a secondary market becomes redundant in today’s retail and shopping environment. The issues are further challenged by the general state of retail in this area—note that Sephora has opted to downsize from their 2162 Broadway location—they passed on their right to renew. Moreover, Anthropology who was negotiating to replace Sephora here after many months of negotiation, decided not to proceed. Additionally Eastern Mountain Sports vacated this area [at 2152 Broadway] as well. The fact is there is a very limited demand for large flagships in both primary and secondary markets. Clearly the Upper West Side is a secondary market.”

The market and neighborhood combined to hurt Barneys.

“Barneys closing is a reflection of the current market,” said SCG Retail Partner David Firestein. “With that said, they were never right for the neighborhood, in the mid 70s. A better fit would have been closer to Lincoln Center, near Century 21.”

And the popularity of online food shopping has impacted the area, including Barneys.

“That stretch of Broadway has always been local, and much of its traffic from shoppers that live or work outside the market area was based on the food anchors—Citerella, Fairway and Zabars—all on the west side of Broadway in a seven-block stretch,” said Robin Abrams, a vice president at Eastern Consolidated. “Once it became possible to get fresh produce and a wide array of prepared foods at the various Whole Foods [stores], Fairway’s other locations and a variety of other competitors, the pedestrian traffic on Broadway diminished. Now the retailers on Broadway must be strong to cater to local traffic, and even stronger if they are to pull from a broader customer base.”