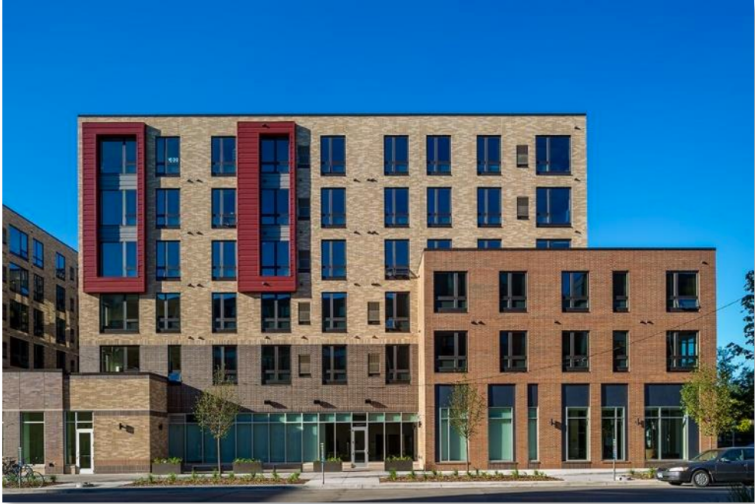 The Venue at Dinkytown, a dorm at the University of Minnesota included in the deal. Photo: The Scion Group

A troika of student-housing heavyweights—the Canada Pension Investment Board, the Scion Group and the Singaporean investment firm GIC—has scored $707 million through Walker & Dunlop to buy a set of nearly two dozen U.S. student housing properties, according to an announcement from the lender.

The debt comes in the form of a Fannie Mae credit facility that backs the financing for 15 years. The loan is cross-collateralized, with the entirety the debt secured by all 23 assets, Walker & Dunlop executives said.

“Lots of foreign capital and institutional investors have come into the [student-housing] space,” said Will Baker, a managing director at the Maryland-based lender.

Nearly all the properties securing the loan were previously owned, in part, by Harrison Real Estate Capital, but they have little else in common. Most are Class-A assets near major universities, but the buyers consider others to be value-add projects.

Some, like The Annex, at Miami University of Ohio, comprise detached townhomes, while others, such as the Lux on Capitol at Indiana University–Purdue University Indianapolis take the form of urban apartment towers.

Despite concerns of a glut of student housing—50,000 new student housing beds came on line in 2017, Baker said—individual properties can still make for attractive investments, according to Walker & Dunlop.

“We like schools of at least 10,000 kids, with properties within a mile or two of campus, or [that are along the route of] a bus or university-owned shuttle,” said Brendan Coleman, Baker’s co-lead for the deal. “We’re tuned into specific schools where it’s easy for kids to get class.”

Still, the lender admits that tenants in private student housing—typically 18 to 22 year olds whose leases are co-signed by their parents—can be a demanding bunch.

“If you don’t know how to manage them or keep everyone happy, kids can crush your apartments,” Coleman said. As a result, the developments are often packed with amenities like swimming pools and media rooms, and property managers live in fear of viral negative reviews on social media sinking their reputations.

An inquiry to each member of the buyers’ group was not returned, and representatives of Fannie Mae were not available to comment.