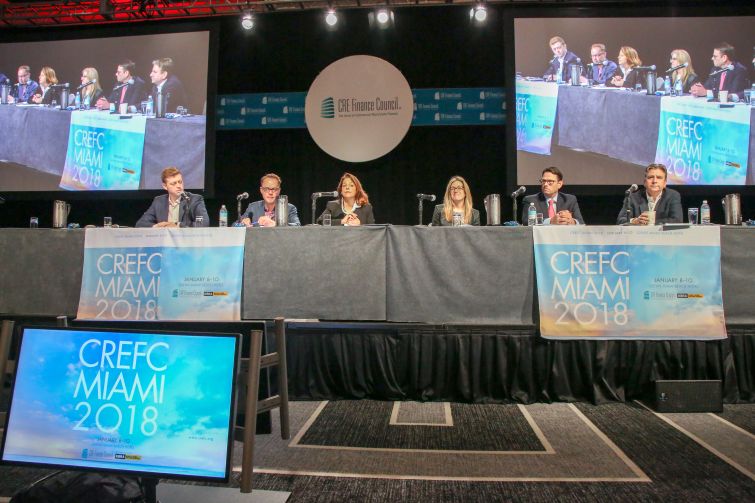 One senior panelist, bemused that what he saw as a pro-growth tax reform successfully made its way to President Donald Trump‘s desk last year, cautioned conference attendees not to expect more of the same, citing an unheralded level of partisan enmity in the legislative branch that he said would distract lawmakers from common-sense compromises.

(CREFC’s rules for the conference prevent journalists from identifying or quoting speakers at the meeting’s events.)

Most pressing on legislators’ agenda in the New Year, another speaker explained, will be a looming debt-limit struggle. Congress, responsible for setting the nation’s budget, also separately writes the laws on how much debt the government may carry. Since December, when federal debt hit the current legal ceiling just above $20 trillion, the Treasury Department has funded the government using extraordinary measures, paying bills using only incoming tax receipts and interest it has captured from federal pension funds. That financial flexibility will run out in March, setting the government up for default without Congressional action.

A default event would be unprecedented, panelists agreed, hesitating to speculate on the economic fallout.

A questioner—young, at 35, by the room’s standards—asked the speakers how they thought ballooning federal debt should be resolved in the longer term, wondering aloud whether millennials could expect to face an irreparable social crisis when they inherit the reins of political power in coming decades. Panel experts agreed that the issue was nearly intractable, pointing out that mandatory spending, that is, payments for social safety net programs that are not approved in yearly Congressional budgets, makes up as much as two-thirds of annual federal outlays. Revising commitments to those programs, the panel stated, would take unusual legislative willpower because Americans who rely on Social Security and Medicare vote at a disproportionate rate in nonpresidential elections.

Cheerful thoughts were difficult to come by at the Tuesday-morning event, though the speakers expressed their relief that the recent tax reform had not barred tax-free like-kind exchanges for real estate and expressed optimism about possible reforms at Freddie Mac and Fannie Mae in the year to come. With a slew of Republican senators, such as Tennessee’s Bob Corker and Arizona’s Jeff Flake, announcing their retirements, the CREFC panelists suggested that departing lawmakers could move to enact popular, common-sense economic reforms to help cement their legacies.