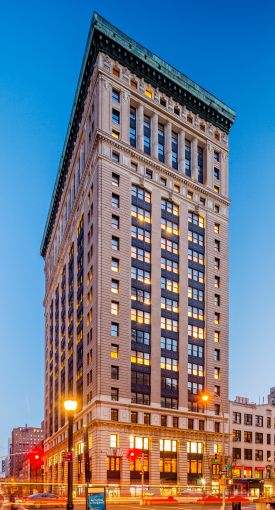 The company, which provides investment data on private and public equity markets, including venture capital and mergers and acquisitions, will occupy the entire 13th and 14th floors of the 20-story building for 11 years and four months, according to the landlord.

PitchBook is relocating from 155 Fifth Avenue between East 21st and East 22nd Streets in the Flatiron District, where it has 10,400 square feet on the fourth and fifth floors, according to CoStar Group.

A central reason for the move is because PitchBook, which has offices in Europe as well, is rapidly expanding its workforce.

“The epicenter of the U.S. financial industry, New York is a key market for PitchBook to continue building and expanding our presence,” John Gabbert, founder and chief executive officer of PitchBook, said in a prepared statement. “In 2017, PitchBook’s global headcount grew by 20 percent, and nearly 50 percent in the New York office, which served as a forcing function to expand our office spaces globally.”

David Berkey and Andrew Wiener of L&L Holding Company, the exclusive leasing and managing arm of the building, handled the deal for Columbia Property Trust, while Sam Spillane and Michael Liss of CBRE brokered the transaction for the tenant.

Columbia Property Trust has recently spent approximately $10 million renovating the building with the addition of a new lobby, new elevator cabs and an upgrade of the retail facade. The lobby revamp will be unveiled next month and the other renovations will be completed towards the end of the year.

“PitchBook is a great fit for the repositioned 315 Park Avenue South—a building that continues to prove its ability to serve a broad spectrum of growing tenants, from creative, media and technology companies to forward-leaning investment firms,” Nelson Mills, the president and chief executive officer of Columbia, said in prepared remarks.

The 334,000-square-foot 315 Park Avenue South is now 84 percent leased, according to the landlord. Existing tenants in the building include BDG Media, Gemini Trust and Winton Capital.

The CBRE brokers declined to comment via a spokeswoman.