Labor vs Lobbyists: A Look at the ‘Campaign to Stop REBNY Bullies’ 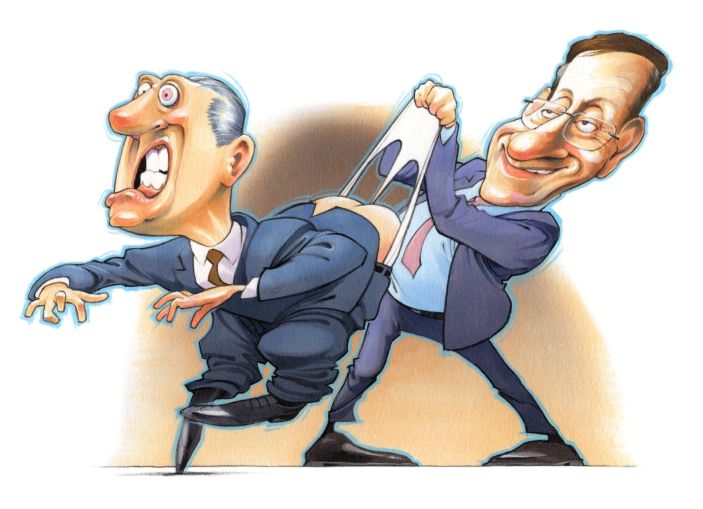 The emails first began circulating last summer and intensified during the fall as the November elections approached. They were scathing in their criticism of the top industry body in New York real estate, labeling the organization as a “plague” on New York City and calling its leaders “a bunch of billionaire bullies and racketeers.”

One featured more than 30 political candidates running for various city offices—including mayor, public advocate, comptroller, borough president and City Council—holding up signs saying to “beware” of the “real estate bullies” in question. Others spread the word of public protests at City Hall and echoed calls for the state to investigate Mayor Bill de Blasio and his administration for operating pay-to-play schemes benefitting developers.

They were, and continue to be, the work of the Campaign to Stop REBNY Bullies, a protest initiative laying a wide variety of issues—from the city’s affordable housing shortage and homeless crisis to the displacement of small businesses and the influx of construction worker fatalities in recent years—squarely at the feet of the Real Estate Board of New York.

The campaign is led by Ray Rogers, a 73-year-old labor activist and organizer renowned in labor circles for his anti-corporate initiatives against the likes of Coca-Cola and textile manufacturer J.P. Stevens & Co. (the latter was dramatized in the Academy Award-winning 1979 film Norma Rae). Having made a career challenging the perceived greed of corporate entities and political institutions—often working on behalf of and alongside labor unions—Rogers and his organization Corporate Campaign have now set their sights on REBNY.

“My objective is to greatly diminish the political power of REBNY and to make REBNY something that you would not recognize today,” Rogers told Commercial Observer. “What REBNY should be in the business of is working with the vast majority of their membership, which is real estate agents and brokers, to help them buy and rent and sell properties. They should not have their dirty hands and their dirty money in politics, trying to undermine labor protections for construction workers and undermine every kind of rent control and rent stabilization.”

Upon launching last May, the Campaign to Stop REBNY Bullies produced and released a five-minute animated film entitled “Bullies,” which screened at the annual Workers Unite Film Festival. The animated short blames REBNY-backed policies for exacerbating high commercial rents that price out small businesses and for fostering unsafe working conditions on construction sites (in addition to drawing a curious, if unclear, connection between REBNY and real estate industry investment in the tobacco industry).

In the months since, the campaign has staged and participated in a handful of protests around the city designed to criticize the real estate industry’s influence over New York politics and public policy, and sought to get its message out by lobbying the support of dozens of political candidates vying for city positions—many of whom appeared in the aforementioned photos on email blasts and the campaign’s site, holding up signs labeling REBNY as “bullies.”

And this week, the campaign will stage its highest-profile protest to date outside of REBNY’s 122nd Annual Banquet at the New York Hilton Midtown—an occasion that will see U.S. Senate Minority Leader Chuck Schumer receive an award honoring his public service. Rogers announced the protest with an open letter to Schumer voicing “displeasure” at the senator’s acceptance of the award—citing REBNY’s support of the Independent Democratic Conference (IDC), a group of eight Democratic New York state senators who align themselves with senate Republicans, enabling the GOP “to maintain control of the New York State Senate particularly as it relates to the interests of the heavyweights in the real estate industry,” the letter says.

REBNY discounts Rogers’ efforts as a union-backed initiative that’s part and parcel of the building trades unions’ ongoing battle for relevance in a construction sector that’s increasingly veering in the favor of nonunion contractors. In particular, the trade association pointed to Metallic Lathers and Reinforcing Ironworkers Local 46 as the driving force behind the Campaign to Stop REBNY Bullies and as Rogers’ primary financial backers.

“We respect Local 46’s right to free expression,” a REBNY spokesman said in a statement. “We wish them well as they seek to more effectively market their services to address the needs of a 21st century construction site.”

Rogers acknowledged that Local 46 supports the Campaign to Stop REBNY Bullies but disputed the notion that any union had hired him with the express goal of lodging an anti-REBNY smear campaign. Rather, he said his interest in the real estate industry group dated back several years and was initially motivated by the issue of construction safety and hazardous working conditions on construction sites. He added that he had had conversations with numerous union leaders about the prospect of taking a stand against REBNY, only for those parties to eventually back out.

“I tried to get [other] labor unions involved but couldn’t get anyone to really do it with me,” Rogers said. “There are a lot of labor leaders out there that have shown great fear, but the labor union was not built because people were scared to fight. Labor leaders have got to start realizing that [unions were] built on activism and courage. I’m so sick of hearing about how ‘REBNY is destroying us’—well, you have an opportunity to turn the tables.” (Local 46 did not return multiple requests for comment.)

While the matter of organized labor plays an undoubtedly significant role in the Campaign to Stop REBNY Bullies’ platform (among the campaign’s goals is for at least 90 percent of New York City construction workers to be working under union contracts), the initiative has gained support from political candidates and social justice advocates passionate about issues ranging from the future viability of the city’s small businesses to the influence that corporate-backed industry groups like REBNY have over the political system.

“I’m not anti-real estate; real estate is important to New York City. But, I do believe REBNY wields tremendous clout over our political system, and I don’t think any one entity should have that,” Sal Albanese, the former city councilman who challenged Mayor de Blasio in last year’s Democratic mayoral primary (and ran in the general election as the Reform Party candidate), told CO.

Albanese described REBNY has having “disproportionately outsized influence over our politics” at the city and state level, citing the role that real estate interests had in the corruption trials of former state politicians Sheldon Silver and Dean Skelos.

“These guys have deep pockets, and they know how to manipulate the political process to their benefit—our campaign finance laws make that possible,” he said. “Chuck Schumer isn’t alone; Bill de Blasio, a so-called progressive, is in the pocket of big real estate. There’s no single entity in the city or state of New York that wields more influence.”

Albanese also criticized the industry group for its role in stunting the progress of the controversial Small Business Jobs Survival Act (SBJSA), which would make it easier for commercial tenants to renew their leases while hindering landlords’ abilities to raise rents at their own discretion. REBNY President John Banks has labeled the proposed law “unconstitutional.”

That issue, in particular, has drawn support for the Campaign to Stop REBNY Bullies from activists like Marni Halasa, who unsuccessfully challenged new City Council Speaker Corey Johnson for his seat representing the Third District on Manhattan’s West Side. Halasa said Rogers’ campaign “highlights an important issue that the average layperson is unaware of: how big real estate actively works against the public.”

“I think Ray has really galvanized small business activists from all over the city to come together, and that’s often difficult,” she noted, pointing to the issue of “hyper-gentrification” that negatively impacts neighborhoods and small businesses as the primary reason she supports the campaign. “A bill that would provide small business owners with leasehold rights and the right to renew their leases—if that can get not just a public hearing but support and passage—would be huge. But does REBNY want that? I’m sure they don’t.”

Albanese agreed that passage of the SBJSA would be “one of the barometers” of the campaign’s success—“If they could pass significant legislation that REBNY opposes, that would be a major win for [Rogers] and the movement,” he said—as would campaign finance reform “that would limit [REBNY’s] influence.”

Albanese—who along with Halasa is among the candidates who had their picture taken holding Stop REBNY Bullies slogans—also contested the notion that Rogers is merely doing the unions’ bidding under the guise of a collectivist, anti-corporate campaign. “Ray Rogers is not somebody you can put up to anything,” he said. “He’s got a history of being an activist and an organizer around the country, and he takes on causes because he believes in them.”

Of course, Rogers’ campaign still has a long way to go in terms of getting anywhere near the traction it would need to attain its lofty goals; the “Bullies” animated short has only just over 1,000 views on YouTube, and sources with knowledge of REBNY’s thinking told CO that the organization has been far from intimidated by the relatively tepid turnout at some of the campaign’s protests to date.

Rogers himself is under no illusions about the task that he has set for himself and the work that lies ahead should he wish to realize his campaign’s goals.

“I say to people all the time that, when you confront powerful institutions, you cannot expect to gain any meaningful concessions or justice unless you’re backed by a significant force or power yourself—it’s not just one demonstration after another,” he noted. “I need to raise money, just like political leaders. We’re taking on the most powerful industry—the most powerful lobby and institution—in the state.”