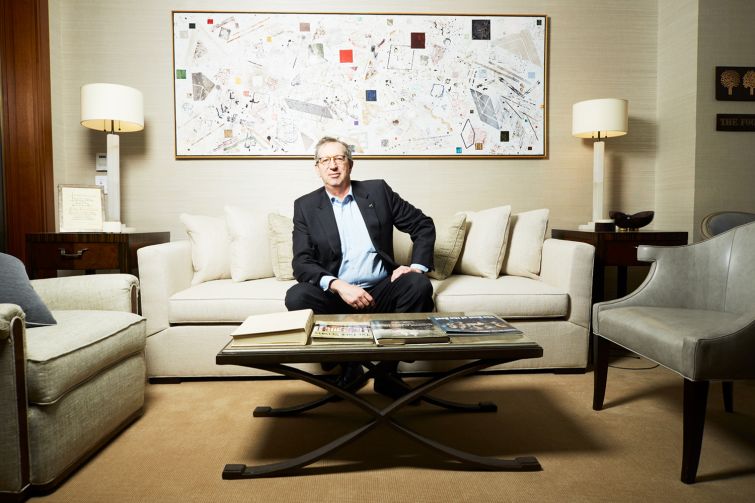 In 1905—so the story goes on the Rudin Management Company website—Samuel Rudin purchased his first building at 153 East 54th Street and was commanded (“advised” the website says) by his father: Never sell. And, while you’re at it, try to purchase all the property around it.

It was a philosophy that forged one of the greatest real estate empires in the city: 10 Midtown office towers; another six Downtown (including One Whitehall Street, which the Commercial Observer calls home); eight apartment buildings on the Upper East Side; eight more on the Upper West Side; Greenwich Lane in Greenwich Village. And we haven’t even mentioned what they’re doing in the Brooklyn Navy Yard.

It was only natural that one day, Rudin’s grandson, William Rudin, would chair the 17,000-member, 122-year-old Real Estate Board of New York, the trade association for the industry that the Rudin family has done so much to shape.

Commercial Observer met with Rudin at his office last month for a video where the conversation was fairly free-range, but with the REBNY gala coming this week, we followed up earlier this month by phone.

Commercial Observer: Your family has been in the real estate business for a long time—what’s your personal history with REBNY?

Bill Rudin: My uncle and my father were active members of REBNY. Twenty-plus years ago they asked to join the executive committee—my father was involved in ABNY [the Association for a Better New York], and my uncle was involved in the New York Building Congress. [My father and uncle] thought it would be a great opportunity to represent our family and get to know other REBNY members. Bernie Mendik was chairman then. I was on [REBNY’s] Board of Governors—and then I moved up to the Executive Committee.

So, what’s on your agenda as chairman?

First, I want to build on the great work and foundation that [my predecessor] Rob Speyer and [REBNY President] John Banks built on for the last several years. I’d like to work closely with our partners—the city, state and federal government—to make sure that New York remains competitive. I want to work on affordability and tax reform—regarding tax reform, continue diversifying the economic cost of doing business—and expanding the reach into the outer boroughs. As you know, there’s been incredible growth in all five boroughs over the last year. And keep growing jobs and economy—that’s what makes this city grow and attract talent. You saw last week that the Discovery Channel is moving its headquarters here—that’s a great signal of how New York is doing, generally.

Finally, how do we continue to create more diversity in the real estate industry? [By] bringing minorities and people of color and women in to this amazing industry and expand opportunities for those people.

How are you planning on doing that?

We’re involved with training and an internship, a program called Building Skills NY, which makes entry-level job placement on construction sites. Plus, we show by example [as in] John Banks being the president; adding more women to the executive committee; and really about creating opportunities and awareness, training programs and mentoring programs. It’s a responsibility of our members to be proactive in promoting those things.

When my daughter came into the business, Mary Ann Tighe [of CBRE] had this group of women she mentors, and it made a world of difference for my daughter and women like Helena Durst and others to get together with Mary Ann and feel there’s a network they can tap into [with] other women.

You just saw the news about MaryAnne Gilmartin; that’s another example of a woman running her own company. Amy Rose just became the CEO of Rose Associates. These are important milestones in terms of women taking more leadership roles in our industry.

What are your thoughts about Affordable New York and how that’s playing out?

First, it took several years. Rob and John and the REBNY team did a great job [getting it passed]. As we know, two-thirds of New Yorkers rent their homes, so we have to build more affordable housing to drive our economy. The workforce is here, but we’ve got to keep pushing forward. When my dad was running ABNY, people were leaving—and companies would follow. Today, companies are coming because people are here. And we have the opportunity to have affordable homes, access to transportation, schools and parks. It’s a great step forward [with] more housing being built.

Having said all that, because of land costs, construction costs, zoning requirements, we’ve got to find ways to [make it feasible]. If the government really wants to create more housing, they have to do more in terms of subsidies so we can produce a whole panoply of options. Can I go back to priorities for a second?

Construction costs is a big one. We are going to continue to have those discussions, dealing with the Department of Buildings, streamlining the permitting processes—all the things that we need to do on a daily basis—and, yes, we have to make sure construction sites are safe, make sure there’s a good working relationship [with labor]—which there already is.

Speaking of construction, is REBNY going to roll up its sleeves to make sure construction rules and regulations are implemented?

Of course! I once saw an interview with Continental Airlines’ Gordon Bethune where he said the three things my airline focuses on are—safety, safety, safety. It’s a major priority. The city put through specific requirements for the safety bill—we brought in a lot of expertise as the bill was debated. But now that it’s done, we will work with construction companies to ensure safe work.

Tell us your thoughts about REBNY’s focus on sustainability and tech.

REBNY has created a tech committee where Winston Fisher [of Fisher Brothers] is the co-chair with John Gilbert [III of Rudin Management]; we got an incredible response to this committee and many subcommittees related to it. My son Michael is on one of the subcommittees. We’re at the forefront of sustainability. You know [Rudin’s] Nantum system? The way we describe it is a brain for operating a building. It monitors all the electrical, CO2 and temperature and within our portfolio we have reduced our hot and cold calls by 70 percent. We’re going to be working on pilot programs to beta test ideas in our buildings and other REBNY member buildings to incubate [sustainability] ideas and grow that sector. We want to be focused on what real estate hasn’t really been focused on: making our buildings safer, secure and sustainable.

When we spoke last month, the tax bill was still in conference; now that it’s passed tell us your thoughts about it.

Obviously, I was disappointed in terms of SALT [state and local income tax], and it’s a significant limitation. But it was very positive for real estate and the pass-through provision, which will I think—and, yes, it’s complicated—but for new construction and renovations, it will help incentivize people to invest and develop real estate; 1031 [exchange, which allows for an investor to defer all capital gain taxes] was not eliminated and that was very positive. They treated real property debt different than corporate debt. We’re still able to deduct our interest costs versus a big company like IBM which can only write off [a percentage]. REITs got a positive tax structure. So we think it’s positive, but we know the government is figuring out ways to offset the hit on SALT and we’ll see what [Gov. Andrew Cuomo] proposes. But we think Discovery [announcing it was moving to New York is a] very positive sign; it shows we’re resilient. You’ve seen other leases signed in the fourth quarter when pretty much everyone knew what the tax bill would be. So the market did not freeze—Bank of America, Comcast, EY, NYU [all signed big leases]. There was literally over 2 million square feet of leases done in the last few months of the year—MasterCard [which took 212,000 square feet at 150 Fifth Avenue] was done right after Thanksgiving. And all these deals were taking more space. We’re very upbeat about leasing velocity and companies understanding the overall tax situation.

What do you think about the future of the EB-5 immigrant investor visa program?

I know it just got extended in a budget resolution for a couple of months. If we are talking about infrastructure, it’s an important tool in the capital stack.

What was the best thing that Rob Speyer did in the job?

I think what Rob did was handle the many transitions. Steven Spinola retired, and he handled that transition of going through the process finding significant shoes to fill. Steve did a very fine job for many years; as long as I can remember Spinola was running it. Rob led that effort that found John—and led that in a seamless manner. Then [Mayor Michael] Bloomberg to [Bill] de Blasio; [Speaker] Chris Quinn to [Melissa Mark-Viverito]. Transitions up in Albany—the Speaker’s office and State Senate. It shows true skill to handle those things happening at a very rapid pace—not to mention 421a, which was very, very critical and the Midtown East zoning. And sometimes it’s what’s not passed. There was the vendor bill [to double the number of pushcarts]—which he fought very hard not to have pass. He was an incredibly effective leader for a young man—I look forward to continuing to work with him; I hope he’ll advise and counsel me.

How would you sum up your outlook going forward?