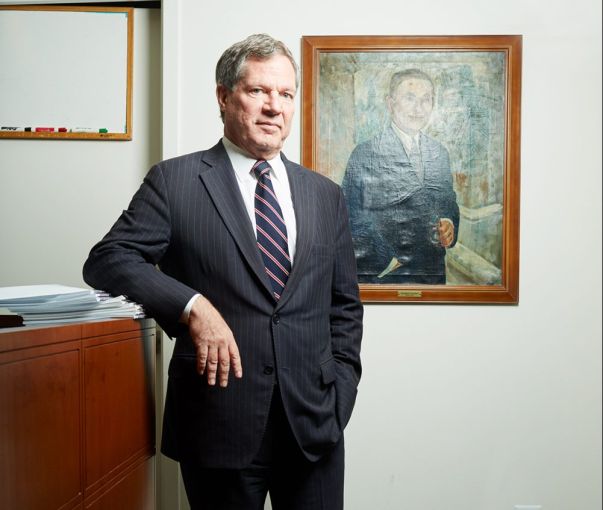 Kamber Management is a 77-year-old company that, with a Manhattan collection of four properties, sought a larger play.

So Steven Levy, the president and CEO of the Manhattan-based, third-generation family firm, acquired Tower 45, a 40-story, 458,000-square-foot office building at 120 West 45th Street, for $365 million from SL Green Realty in September 2015. The building is currently in the midst of a years-long redesign that will make it the jewel in the Kamber crown.

At the time, Kamber held a 95-year leasehold on the 1.1-million-square-foot 1407 Broadway that the firm’s founder, Abraham Kamber (Levy’s grandfather) had originally acquired from developer William Zeckendorf. As the leasehold passed its 65-year mark, Levy felt the time frame had become too short to maintain its value and sought to sell the asset, hoping to instead find a property that would allow the company to hold a fee position.

“At some point [in the leasehold], the owner has less incentive to invest capital, and tenants find the lease term too short for their sense of stability,” Levy said. “Once you’re below 25 years, you can’t borrow money on it. If there’s a big capital investment to be made, you’re kind of scratching your head, thinking, do I really want to do this.”

Kamber sold the leasehold to Shorenstein Realty Services for $330 million in 2015 and used the proceeds to help finance the acquisition of Tower 45. (Also helping: the company’s September 2015 sale of 18 and 20 West 33rd Street to a partnership of the Carlyle Group and 60 Guilders for $111 million.)

Once the purchase was done, Kamber had its work cut out for it, as the building needed significant renovations, which Levy put in the $10 million range. The building’s atrium and lobby are being completely redesigned by the architectural firm Pei Cobb Freed & Partners, and all of the building’s mechanicals are being updated with several innovative systems being installed. These include destination dispatch, a system that routes passengers into the building’s elevators more efficiently, and an atmosphere air filtration system that gives the building some of the cleanest indoor air in New York.

“Destination dispatch is the new computer algorithm you find in new buildings,” he said. “It makes elevator usage much more efficient and quicker for the passenger. The elevators won’t be completed until the end of 2018, but we’ll be turning that on at the beginning of the year.”

As for the air filtration system, Kamber was the first developer in New York to install it, giving Tower 45 arguably the cleanest air in New York. This designation only lasted several weeks, though, as over 10 other buildings have installed the system since.

“It scrubs the air in the building according to three measurements—small particulate, large particulate and one for anything you can smell,” Levy said. “Small particulate tends to be bacteria or viruses—organic matter. Large particles tend to be dust and dirt. The filtration system cuts down the presence of those three by about 50 percent.”

Every floor of the building has sensors to measure air quality, which Levy can monitor in real time on a smartphone app. He said the system has been found to save $2,300 a year per employee in terms of sick days avoided and increased productivity.

With floor plates between 10,000 and 13,000 square feet, Levy sees Tower 45 as filling an essential niche in the New York office market.

“We are a small boutique building,” he said. “If tenants like the neighborhood and aren’t large enough to command the presence of a full floor in [larger buildings on Avenue of the Americas], they can be in a state-of-the-art, beautiful building with tenant amenities and a location that can’t be beat. We think we distinguish ourselves on that level.”

Richard Baxter, a vice chairman of New York capital markets and investment sales for Colliers, represented SL Green in the Tower 45 sale while still at JLL and has known Levy for 20 years.

“Steve’s decisive. When he wants to acquire something, he goes for it very aggressively,” Baxter said. “The Tower 45 deal was a very competitive transaction. There was competitive bidding to buy the building, and he was able to pre-empt the bid process. He’s a gentleman and a man of his word, and when he says he’s going to do something, he does it. You could do business with him on a handshake.”

The publicity around Tower 45 since the purchase has brought increased and much-desired attention to Kamber and Levy, who said he’s being brought more deals to consider as a result. While Levy is a broker, he’s spent most of his time in real estate as more of a steward of the family office, handling Kamber’s investments.

Levy, 62, grew up on the Upper East Side. His grandfather, Abraham Kamber, founded the company that bears his name in 1940, but Levy said that he and his grandfather never discussed business. Rather, his father Stanley, an attorney who didn’t work in the business, told him all about it instead.

Levy attended Connecticut College in New London, Conn., where he was allowed to design his own major, and graduated in 1977 with a bachelor’s in the American founding and the enlightenment. He scored his first job in real estate as a leasing broker at Julien J. Studley (now Savills Studley).

“It was highly unusual then to be able to design your own interdisciplinary major. I’m still an amateur historian,” he said.

“A couple of years into working at Julian Studley, I went out to lunch with my boss, Mike Soloman. He said, ‘Steve, do you know why we hired you?’ I said, ‘Actually, Mike, I have no idea.’ He said, ‘Because you had that crazy major on your résumé. I figured if you could be that creative, you might be able to do something.’”

Levy, who said that seeking a job in real estate after graduation was more of a natural inclination, given his grandfather’s position, than a marked decision about his future, didn’t find success as a leasing broker, finding a more natural fit in sales.

He later worked at Wm. A. White & Sons, managing the firm’s Manhattan properties, and realized that his future would include a broader range of duties than simply sales. As he was looking over some of his company’s proposed sales, he inadvertently caught the development bug.

“We had these incredible deals for sale,” he said. “I went to my boss, and I said, ‘You know, let’s not sell this one, [referring to a building at 40 Worth Street]. Let’s raise some money and buy it.’ He looked at me and said, ‘Steve, we don’t do that here. We’re brokers.’ So I realized I was not long for that office. I realized the point was to own.”

Kamber, meanwhile, had been somewhat dormant at the time. While the middle of the 20th century found the firm owning a slew of prestigious properties throughout Manhattan, including One and Two Park Avenue, the Astor and Manhattan Hotels, and the Hearst Building, many of these were sold in the upmarket of the mid-1960s. By the time the elder Kamber died in 1977, the company, while still a fee-collecting entity with assets of its own, had basically stopped any new deal activity.

After the stint at White & Sons, Levy joined Kamber in 1986. (His brother, Peter, joined the firm three years later and remains today as a principal in charge of the daily operations of Kamber’s properties.)

His father had much of the paperwork related to the family business, and Levy poured through the documents, learning all he could.

“I studied everything and thought, ‘This can’t be that difficult. How do you improve the building’s operations? How do you make it more attractive to tenants?’ ” he said.

Levy said Kamber’s status as a family firm made his duties a bit different than the head of your average real estate firm. While still a broker and actively seeking deals, Levy described his top priority as managing the “family office,” by which he means serving as the steward of the family’s many long-standing investments.

“We have an investment imperative,” he said. “We have everything organized into different types of investments. So I’m not just in real estate. I run a ‘family office’ now. That’s a term that refers to the disparate interests of families that have holdings of various kinds. Real estate is most of what we do but not all. We also have alternative investments. We do quite a bit with energy, rail cars, all kinds of things.”

At first, Levy built the company back to the point where it could manage family properties that had been run by outside firms. This included writing all the operational software for the company, which would remain in use for almost the next two decades. He also sold off shopping centers the company owned around the country, because, he said, “I wasn’t crazy about the asset class.”

For much of his time since then as Kamber’s president, his priority has been increasing the desirability of his family-owned properties and determining the best ways to maximize asset value. Selling off an expiring leasehold, as he did at 1407 Broadway, is one example of this. Another was his handling of a Section 8 housing project the family owned in Groton, Conn., the 446-unit Branford Manor Apartments. While the property had become “tremendously valuable,” Levy said, its effective management over the long run was beyond the company’s expertise, and Levy sold it.

He perceived a better opportunity in the purchase last month of three parking garage condominiums at 80, 100-120 and 220-240 Riverside Boulevard in Manhattan. Kamber purchased the properties, which total 916 parking spots over 248,000 square feet that Levy believes will be “a great long-term asset,” from the U.S. arm of a foreign-based for $50 million. He’s also continuing to manage a 16-story, 143,000-square-foot office building Kamber owns at 15 West 37th Street, a job that includes installing new dual burning boilers and the destination dispatch elevator system.

For later in 2018, Levy aims to see Kamber add another building—as yet undecided—to its portfolio.

“We prefer office, but we’ll look at anything,” he said. “One idea is more of an industrial logistics kind of use somewhere in the metropolitan area, and we’ll be looking to place about $55 million at that time.”

In addition to working on maintaining the business, Kamber, who lives in Greenwich, Conn., with his wife of 33 years, Leora, Levy is a third-generation contributor to the United Jewish Appeal/Federation of Jewish Philanthropies. The couple has three sons, twins David and Michael, 28, and Benjamin, 24.

“The UJA was started around 1938 to rescue Jews in Europe,” Levy said. “The federation is just finishing its 100th anniversary year, and they merged in 1986. Grandpa had always been very involved with that and other institutions, and we continue to contribute a major gift there. Now my boys will be fourth generation, as they’re getting involved in UJA.”

For all the different aspects of his responsibilities at Kamber, Levy said he still sees himself as a broker first and foremost and believes this grounding has played a large part in driving his success—and now, Kamber’s— and will continue to do so in the years ahead.

“I would argue the basis of my success in my business has been my brokerage training, the focus on closing a deal,” he said. “That training has focused me on mastering everything that needs to be done, not relying on others to get a deal closed, following up, and dealing with people in a way that keeps them engaged.”