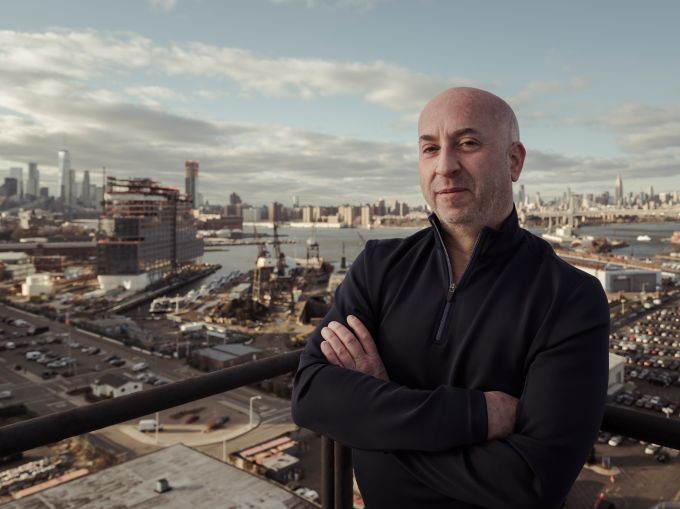 When he arrived there in 1999, he was fresh off taking over his father’s Roseland, N.J.-based real estate business, Steiner Equities Group. The 300-acre shipyard was long past its prime, dotted with a crumbling Civil War-era Naval Hospital, massive dry docks that had once been used for building warships and half-occupied industrial buildings.

Now he operates Steiner Studios, a 580,000-square-foot film production facility spread across six buildings and 26 acres at the eastern edge of the yard. There are six soundstages under construction totaling 180,000 square feet, and by the time the studios are fully built out, the complex will span 1.6 million square feet on 60 acres. On any given day, its 10 soundstages host 2,000 people producing movies, TV shows and commercials. It’s also home to Brooklyn College’s Feirstein Graduate School of Cinema, taking up 68,000 square feet on two floors of a studio building at the corner of Flushing and Washington Avenues.

Now, on the western end of the yard, Steiner and his development arm, Steiner NYC, are building 165,000 square feet of retail—including the city’s first 75,000-square-foot Wegmans—and 360,000 square feet of light industrial and office space. And in a move that angered neighbors and preservationists, his construction team demolished several mid-19th century houses, known as Admiral’s Row, to make way for the project. (According to Steiner, he was just following the plans handed down by the yard’s owners, the not-for-profit Brooklyn Navy Yard Development Corporation. He signed 99-year leases with the city for the studio buildings and the Admiral’s Row site, the latter of which he won through an RFP process.) Meanwhile, the Navy Yard’s development corporation announced plans today to develop an additional 5.1 million square feet of industrial and office space, funded by a mix of existing rent revenues, government subsidies, philanthropic money and tax credits, Bloomberg reported.

But it’s not just about the Navy Yard. Steiner NYC is also wrapping up construction on the Hub, a 55-story, 750-unit rental tower at 333 Schermerhorn Street in Downtown Brooklyn. Move-ins began last May at the partially affordable high-rise, and work on the building is set to be complete in the spring. In Manhattan, his 75-person firm aims to finish Steiner East Village, an 82-unit condominium project at 438 East 12th Street, later this year.

Commercial Observer sat down with the 57-year-old father of three last month at International Council of Shopping Centers New York conference to talk about his development plans for Admiral’s Row, how his management style compares with his father’s and his residential projects.

Commercial Observer: What kind of retail tenants are you looking for at Admiral’s Row?

Are you in serious talks with any specific kinds of retailers?

We’re pretty open-minded, but until they’re signed we don’t really get into it.

Isn’t one of the Admiral’s Row houses being preserved?

We have one building that’s being preserved, and another that’s being rebuilt. What we call Building B will have a community use. It was in terrible shape. The Navy let these buildings go for about 50 years. The Timber Shed we’re rebuilding, that’s probably the most prominent and desirable of the buildings and will likely go to food use, a restaurant likely. We have some green roofs.

The Navy Yard is master leasing 130,000 square feet [of light industrial and office space in the project], as part of its mission to create and maintain industrial jobs in New York City. And the Navy Yard plans to lease in turn to various manufacturers and other creative economy tenants. We are also building 230,000 square feet on top of the parking structure, a building called 399 Sands Street, and that will also be light industrial with 20 percent office.

Do you have a sense of what the office and industrial space at Admiral’s Row is going to rent for?

I don’t know what the Navy Yard is going to be charging. They’re taking the whole thing, and then they’re going to sublease it to various companies—it will be subdivided in advance by us. We can build less expensively, better quality and faster than they can. And by leasing they’re getting 100 percent financing by us without having to put in equity. And our track record is great because of what we’ve done with the studio. What we bring to this project is unique.

What’s the completion date for the light industrial and office?

How do you envision all of this Admiral’s Row stuff when it’s done? In terms of the space and vibe of it?

My father’s definition of great architecture is positive cash flow. I care a lot more about the aesthetics. I think it could be a really vibrant place. The Wegmans dynamic in terms of customer service and the way they treat their employees, they’re considered one of the 10 best employers in the United States by Fortune. I think that sets a tone for the entire development, and I think it will be very vibrant because it’s true mixed-use.

Hopefully, it’s very attractive, in keeping with the aesthetic of the Brooklyn Navy Yard—heavy industrial, very raw looking. The studios are like that as well.

Are you going to have any public space?

We’ll be having some historical stuff we’ll be putting up to educate people about the history of it. The Timber Shed is a historic structure. In general, restoring the community facility building [one of the Admiral’s Row houses]. There were a lot of beautiful buildings here that just ended up becoming ruins. And we have our hands full restoring this one because structurally it’s in such tough shape from 50 years of neglect. Unfortunately, there’s no way to restore all of them.

We inherited the site plan. The Navy Yard did the Uniform Land Use Review Process. We tweaked it a little bit, but that was all done before we got involved in the site. While we’re restoring part of this, at the other end of the yard in the studios we’re going to be restoring the entire annex area where the first Naval Hospital in the country was, where the surgeon’s house was. The star of the show was the building itself. My conscience is clear. It helps the Navy Yard in its mission—which is a very noble mission.

There was a lot of local controversy about demolishing the Admiral’s Row houses. How did you deal with that?

That preceded us. I love historic buildings. On the building, we’re doing as a community facility I would have liked to have left it in its decayed state with trees growing through it. I think it’s much more intriguing and thought-provoking and attention-grabbing. But in this country, liability is terrible, and people like historic structures to be preserved or reconstructed and not left in this sort of alive state, in contrast with Europe. That wasn’t an option, but it would have been my preference. Ideally, all those buildings would have been restored. But the Navy Yard needs to maintain jobs, and they don’t have the money. And they were really far gone.

What exactly are you doing with the Naval Hospital?

We’re restoring virtually all the buildings up there for [movie] studio use. They’d be support spaces.

When we started at the Navy Yard in 1999, there were literally packs of wild dogs running around. And the streets were just bombed out. And no one wanted anything to do with it. People said we were crazy to be building in Brooklyn, that no one will ever go. Luckily, they were wrong.

Tell me about what’s going on with your Downtown Brooklyn rental Hub.

We call this project Hub because it’s at the center of so many neighborhoods. It’s as well located public transportation-wise as Williamsburg is L-train dependent. We have 30,000 feet of retail. The building will be completed in the next several months. Up until about two weeks ago, we had about 60 percent of our units leased. Leasing is ongoing. We have an amenities package that no one can meet because it’s an acre all on one floor, tons of light and air. I’m extremely happy with how it turned out. And given the size of our site, no one can really recreate that.

We have 750 units, 600 market rate-units, of which 85 percent have corner windows. These are real corners, three-foot setbacks. The affordable is typical. Thousands of applications for each unit. And it could also go with some office for the upper floors rather than all retail, at the corner of Third and Flatbush [Avenues]. We’ll be done by the end of first quarter of 2018.

How much of Steiner East Village has sold so far?

About 75 percent. And that’s exactly what we wanted because we’re finishing construction. We’ve raised prices eight to 10 times. Our sales are doing much better than the market as a whole. And I like having inventory once it’s built. I don’t like to sell just off plans. I think it’s worth much more once people can see it. We’re going to start closings this month. We’ll basically be done in the next couple months.

Our building’s been setting records for pricing in the East Village. Our listing firm for this is Douglas Elliman, Fredrik Eklund and John Gomes—so we were on Million Dollar Listing; I’m super embarrassed about that. That’s a really nice building.

What do you do in your spare time?

I do Pilates and yoga. I go on some pretty long walks around the city, five to eight miles. I like to go to museums and a lot of cultural events. I like to go to a lot of theater, music, dance. I took a glass-blowing lesson. I’m a pretty big reader. I love the Williamsburg Bridge. I’ll walk from Midtown South down and in Brooklyn.

You still run your father’s company, Steiner Equities Group, right? How have things changed since you took over?

I’ve tried to change the focus of what we do from suburban office and industrial to urban industrial, rental and condo and special-purpose stuff like the studios, which is an operating company rather than real estate per se.

Steiner NYC is the one that was solely mine, and that’s the more active of the two. That’s our development arm. Steiner Equities Group is the property management and leasing arm for the properties that we have in New Jersey, and we still do that leasing and management.

How do you think your management style differs from your father’s?

My dad is an engineer by training. And I think really understands construction. I’m stronger in branding and marketing and design, and I’m more of an aesthete. And I have a lot more going on than we ever had going on when he was in his prime. I have 10 times as much in development as we had at our peak under him.

My management style is that I’m pretty laid back, and I operate by triage. As long as people are doing the job right, I leave them alone. I don’t manage them actively. I just give them a lot of rope. It’s much more of a casual environment. No dress code, flexible hours, we have a fitness center that the employees can use. The other day when we had a big snow day, I told everyone they can go buy a pair of snow boots on us.