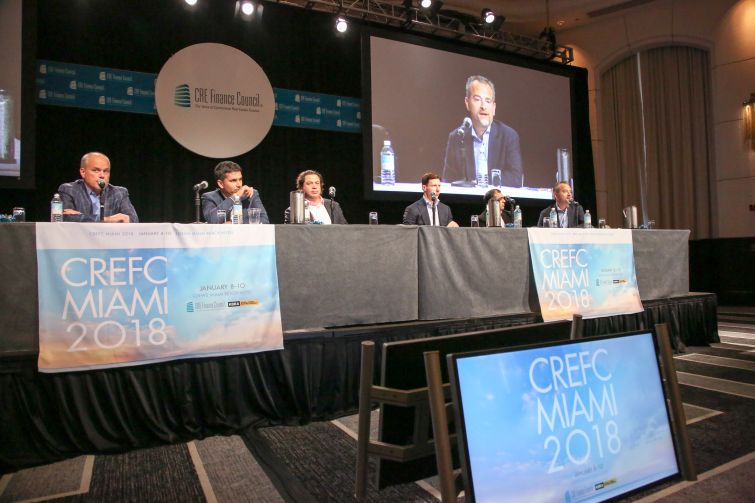 Commercial real estate collateralized loan obligations (CRE CLOs). It’s a bit of a mouthful for sure, and for some, CLOs are a sobering reminder of the pre-crisis Wild West. But, they’re baaack. And, judging by the packed house with standing room only that CREFC panelists on the “CRE CLOs are Back…What’s Different this Time?” panel—including issuers, lenders and an investor—spoke to, people are curious about the new and improved 2018 CRE CLO market.

And for good reason: The market is heating up, significantly. Case and point, in December, Blackstone Group issued the largest CRE CLO post-crisis, the BXMT 2017-FL1 transaction, weighing in at a whopping $1 billion. The transaction was collateralized by 31 senior participation interests in loans secured by 71 properties, according to a report by KBRA at the time of the deal’s issuance.

Last year saw almost $8 billion in deal volume, but panelists estimate that amount will easily rise to $12 billion to $14 billion in 2018, driven partly by investor demand for the bespoke financing market. It’s a significant increase, given that in 2016 there was only $2 billion in issuance. That said, the market may be growing but remains disciplined and well balanced, one panelist said.

Today, CRE CLOs are a benign, nonrecourse source of financing that serve a distinct market purpose, panelists noted. Specifically, they solve the capacity issue around balance sheet financing. As an added bonus, when the market is functioning well, a CRE CLO is an accretive form of financing that complements warehouse financing nicely. Further, the deals create new capital markets opportunities and relationships for their participants.

First up in the panel discussion was the question of how recent CRE CLOs differ from CLOs issued pre-crisis. One panelist said that today’s CRE CLOs are “plain vanilla” unlike the more exotic pre-crisis days. But simply put, they have improved collateral quality. Pre-2007, the majority of transactions were more leveraged and the loans pledged as collateral had higher leverage attachment points. Today’s CRE CLOs are also composed entirely of first lien mortgages in contrast to pre-crisis collateral, which consisted of various position in the capital stack.

Most of the loans securitized in today’s CRE CLOs are floating-rate, short-term bridge loans on transitional assets where the sponsor is in the process of implementing a business plan on the property.

The notion that the loans included in the structures must always be cash-flowing is overstated, one panelist said. While generally true, the spectrum of loans in deals varies greatly and rating agencies are very pragmatic on how these loans are viewed. However, ground-up construction loans won’t make the cut.

Lenders also have more flexibility with CRE CLOs than they typically would in a REMIC structure, panelists said, with less servicing restrictions when it comes to modifying the loans. A key factor, given the transitional nature of the underlying collateral and the varying timelines of a borrower’s business plan implementation for those assets.

Tempted to dabble in the space and issue a one-off CRE CLO deal?

Proceed with caution, said participants. Significant resources are required from both an expense and labor perspective in order to pull a transaction together. From pooling the assets in an investor-friendly structure to working with the rating agencies and legal counsel to contending with extended transaction timelines and market volatility. The gestation period can take up to 15 weeks, and in a volatile market, the cost of funds targeted by an issuer can move significantly.  And don’t forget, CRE CLO issuances, like CMBS, are subject to risk retention requirements.

Something else to bear in mind if considering a single deal is that investors are typically more receptive to those who are in the market more frequently, panelists said.

Investors in the asset class are—as always—responsible for doing their homework. While one panelist had some concern that this isn’t necessarily always the case, evident in oversubscribed AAA tranches, another panelist argued that investors today are buying CRE CLO bonds based on diligence and underwriting as opposed to ratings—another key differentiation from the pre-crisis era.

One thing is pretty clear, with issuance expected to almost double this year, the use of CRE CLOs for transitional lending will continue for the foreseeable future.