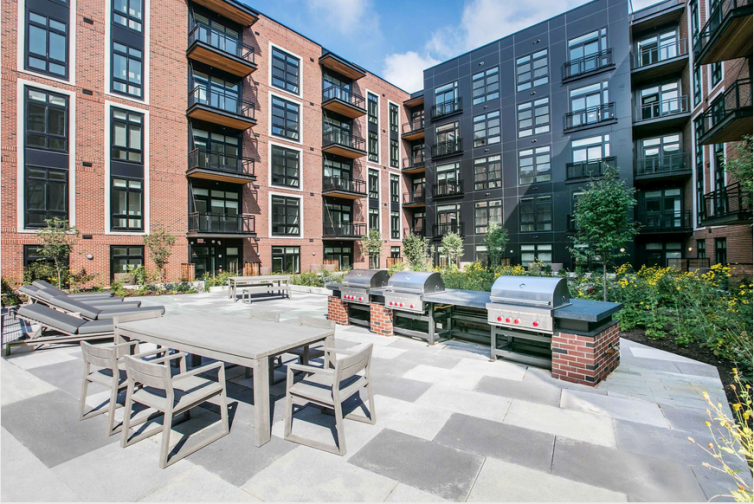 A courtyard at the Brookland Press Apartments. Photo: Douglas Development

Douglas Development has secured a $58 million bridge loan to refinance its construction debt on Brookland Press Apartments, a freshly-built rental complex in Washington, D.C., according to an announcement from Citizens Bank.

The Providence, R.I.-based lender is providing the two-year loan just as the twin-building site, located at 806 Channing Place NE, is beginning to find renters. Financing for the construction of the 295-unit development came from an undisclosed D.C.-area bank, but Citizens took that lender out as Douglas aims to lease the building before transitioning to a longer-term mortgage.

The financing is further supported by mezzanine loans from Guggenheim and Hunt Companies, though officials at Douglas and Citizens declined to provide further details. Representatives from the two mezzanine lenders did not return requests for comment.

Jordan Klinger, finance director for Douglas Development, talked up the project’s affordable pricing and its location within the city as assets to potential tenants.

“We’re a block from the Metro, across the street from Rhode Island Row“—a newly redeveloped retail strip—”and we’re right on the Metropolitan Branch trail,” Klinger said, citing a popular local jogging route. “Northeast D.C. as a whole has been a growing market, and a lot of new housing deliveries have been done there. But we’re happy with where we are.”

“As growth moved into the city east from the Capitol Building, older neighborhoods have become growth areas for the city,” Leon said. “Major retailers have come into this market in the last couple of years, and there are new restaurants and bars. It’s really becoming a desirable place to live.”

One of the two six-story buildings, which Douglas christened the Foundry, was originally constructed as a printing factory in the 1920s. The other building, known as the Forge, was newly built, and the two are connected by a one-story common space whose roof doubles as an outdoor courtyard shaded by the apartment structures. Amenities include bicycle storage, an exercise facility, and an outdoor swimming pool.