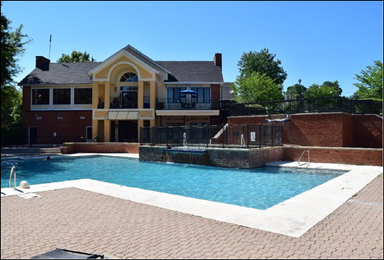 A pool at The Park at Hoover, in Hoover, Ala. Credit: ACORE Capital

Crescent Real Estate, a Fort Worth, Texas-based investment fund, has nabbed a $50 million refinancing from ACORE Capital on a multifamily development in Hoover, Ala., Commercial Observer can exclusively report.

The five-year all-in mortgage knocks out existing debt on the complex, The Park at Hoover, and will fund renovations to the property’s clubhouse, fitness center and 69 residential buildings.

The loan was made on the basis of a property valuation of about $75 million, implying a loan-to-value ratio of 67%, according to a source with direct knowledge of the transaction.

The Park, at 2135 Centennial Drive, is about 10 miles south of downtown Birmingham, a city that has suffered consistent outflows of residents for nearly half a century. (After reaching a peak of 341,000 in the 1960 census, the population has declined in every decade since, down nearly 40 percent to 212,000 in 2010.)

“When we were presented with this opportunity, we felt that we knew the market well, and that Hoover was one of the better school districts” in Birmingham’s suburbs, Wright said. “This is going to be a less expensive option in a good school district, with a great sponsor.”

The Park’s tally of more than a thousand units helped ACORE get comfortable with the financing, according to Wright. That volume spreads Crescent’s $50 million debt down to $47,000 per apartment. Eighty-eight percent of apartments are now occupied, a number ACORE hopes Crescent will boost into the low 90s over the loan’s term.

A representative from Crescent did not immediately respond to a request for comment.