The Construction Industry Should Brace Itself for a Rollercoaster 2018: Experts

The housing market has slipped, public work investments are rising and the tax reform brings many unknowns 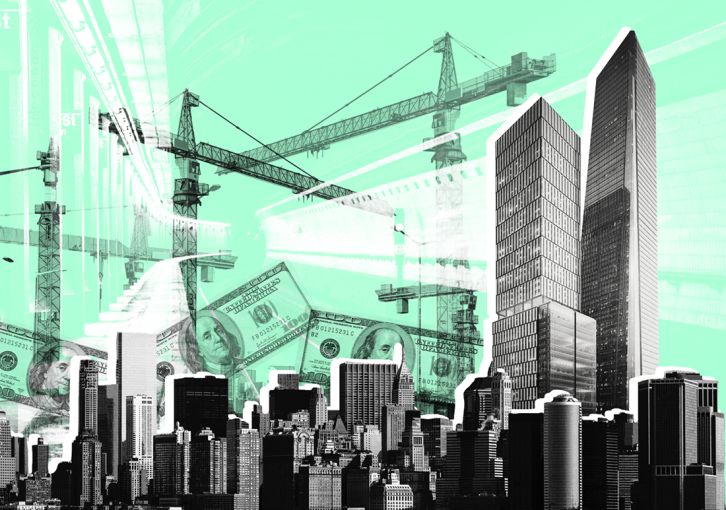 NAILED IT: The construction industry is up for a mixed year in 2018. Illustration: Kaitlyn Flannagan/Commercial Observer

Coming off a few booming years, New York City’s real estate industry—including the construction sector—has been suffering a bit of a setback this year.

The New York Building Congress forecasts at year end, $45.3 billion will have been spent on construction in 2017, the second-highest-ever total dollar amount committed to construction in the city’s history, according to the organization.

Construction permits, which indicate the level of future work in the city, meanwhile are up slightly this year, although the pace is slowing. The New York City Department of Buildings issued 109,724 permits in fiscal year 2017, ending in July, a 0.4 percent increase from 109,277 in 2016, according to the city’s annual Mayor’s Management Report released in September.

What does all of this mean for the construction business in 2018?

Commercial Observer spoke with five experts about what to watch for. Overall, they forecast a decline in housing construction, but an increase in work in the public sector and the office market. The jury is out on construction costs. And then there is the elephant in the room: tax reform, which has been passed by the Senate but not the House of Representatives. Republicans cheer it as a win for jobs (and big Wall Street businesses are chomping at the bit as it would cut the corporate tax rate by nearly a half). Democrats are against it, claiming it serves wealthy individuals and corporations. As for New York City construction experts, they are split on the impact to their segment of the industry.

Over the past few years, there has been a surge in housing development, which many experts say has led to an oversupply. And in turn, construction of new homes slowed down this year by 41.2 percent and that is expected to continue for the foreseeable future. There were 37,700 new housing units added in 2016, just 26,700 this year, and the Building Congress expects 24,000 new housing units in 2018.

In terms of dollars and cents, $11 billion will be spent on residential construction this year, the Building Congress forecasts, a 31.3 percent drop from $16 billion last year. In 2018, the figure will rise to $11.6 billion.

“I think on the residential end—apartment complexes and condominiums—I think that it’s is a little overheated,” said Richard Lambeck, the chair of the construction management program at New York University’s Schack Institute of Real Estate. “There will be a slow down. The products that have been produced have surpassed the absorption rate. The amount of apartments that are going to be purchased is going to be slowed and it will have an impact on the industry.”

In addition to the oversupply problem, there are a lot of people crying “Not in my backyard,” a.k.a. NIMBY. Community organizations are rallying against large skyscrapers such as SJP Properties’ 200 Amsterdam Avenue on the Upper West Side, Gamma Real Estate’s planned 67-story building at East 58th Street between First Avenue and Sutton Place, and Extell Development Company’s 69-story tower at 50 West 66th Street.

The fear is that these projects could be forced to scale back or canceled altogether due to community opposition, which will lead to less work for construction companies and subcontractors.

“I worry about community to reaction to projects,” Louis Coletti, the president and chief executive officer of contractor association umbrella Building Trades Employers’ Association. “We are going to go back into the 1990s where NIMBYism just takes over and stops the city. You see this opposition to as-of-right projects, that’s crazy. You see the general direction of the city becoming progressive. You just wonder if it is the natural course of things as people become more politically active.”

Government spending for public infrastructure projects climbed this year for projects of note around the five boroughs, such as the redevelopment of LaGuardia Airport and the expansion of the Jacob K. Javits Convention Center and the new Kosciuszko Bridge.

Spending on similar projects is expected to reach about $16.9 billion in 2017, according to the Building Congress report—a 16 percent increase from 2016’s $14.6 billion. And the organization expects a further increase to $18.8 billion next year.

“Our infrastructure and transportation systems are the key,” Coletti said. “They are the real foundation to continued growth in the city. Those systems have lacked appropriate level of investment for many, many years. That’s the reason why the governor has to move billions of dollars for the [John F. Kennedy International Airport] and LaGuardia [Airport] [redevelopment projects].”

He added: “There is going to be a real focus on how to finance and really build our infrastructure to allow New York City to have continued growth.”

On the horizon, major infrastructure projects such as the redevelopment of JFK, the next phase of the Second Avenue subway and the Gateway Tunnel project—which would build another tunnel to New Jersey—lay in wait.

And some are questioning the viability of the next phase of Second Avenue subway project in the short term, as the calls to repair and fix the existing subways grow louder, meaning dollars would go to maintenance. While that could be great for commuters, maintenance produces less construction work than new projects.

“I don’t know if the [Metropolitan Transportation Authority] has sufficient funds to start that early,” Lambeck said. “At least from the MTA psperspective, they have been getting a lot of pressure, primarily in maintenance.”

All across the city there has been an abundance of construction on office projects in 2017. Just along the Far West Side alone there is Related Companies and Oxford Property Group’s Hudson Yards, Brookfield Property Partner’s Manhattan West and Moinian Group’s 3 Hudson Boulevard.

Construction work on all of these projects, as well as others, will continue into next year, keeping contractors busy.

“You have a lot happening with Midtown West products. You have a lot of activity in Lower Manhattan and upgrades to office buildings [across Manhattan],” said Carlo Scissura, the president and CEO of the Building Congress. “Office is a strong part of the market. And you are seeing [large office developments] happen in Brooklyn and in Queens.”

Looking forward, the demand for office space in Manhattan is high (as CO recently reported), and there is a need to renovate a crumbling older stock of buildings. Redevelopments of towers and expansions are an area that could see growth next year. Midtown East—thanks to its new rezoning—will allow for larger projects and developers could look to redevelopment projects in the area, creating more work for construction companies.

“Hudson Yards has proven that there is a tremendous need for new space and much of the city’s current product needs to be replaced,” said Kenneth Colao, the founder and CEO of construction company CNY Group. “If you had another large sector of town that was wide open for development, I think it would be in play. The [Midtown East] rezoning I think will support more redevelopment.”

In May, Turner & Townsend released its annual construction market survey that pegged New York City as the world’s most expensive city for construction. The average cost of a building was at $354 per square foot, surpassing Zurich, Switzerland which came in at $328 per square foot.

Rising values has become a problem in the industry due to a variety of factors, including the cost of labor. Construction companies have blamed union’s high hourly wages and an abundance of regulations.

On the latter point, unions have been making compromises in contract negotiations and lowering hourly wages as more developers demand general contractors take bids from nonunion companies in order to increase profit margins. Some construction leaders expect this trend to continue as the competition between organized labor and other subcontractors heats up further.

“I think the unions have to recognize that in order to be viable they need to work with their development clients and figure out ways to reduce costs,” said Richard Wood, the CEO of Plaza Construction.

Another reason for inflated construction costs is high insurance rates. New York is the only state with a law that allows a worker injured on a construction site to sue everyone—construction companies and individual superiors. This increased liability raises insurance premiums.

But regulations for the industry have increased towards the end of the year, as the City Council tried to improve safety on construction sites. The council passed a number of bills this year targeting construction safety, including one polarizing one: Intro-1447-C. The legislation will require workers to have at least 40 hours of safety training. Opponents to the bill claimed that it will force contractors to fund courses for their workers, increasing the bottom line. And the council also passed yesterday Intro-1399, which gives most industry employees, including construction workers, the right to “flextime” or two days off from their regular schedules.

“This isn’t a store or a restaurant—this is a construction site,” Coletti said. “We have schedules and budgets we have to make.”

As of publication, Congress’ tax reform bill had not been signed into law. But it looks extremely likely that it will as Republicans in the Senate passed a final version of the bill early today and their counterparts in the House of Representatives will re-vote on the legislation today after approving it yesterday with some errors.

The legislation will cut the corporate tax rate to 21 percent next year from 35 percent, which could mean a boon for companies. With extra money on their balance sheets, companies could reinvest in their offices. And real estate developers may use those funds to upgrade facilities in their assets. This will lead to more construction projects.

“I think indications are that it will be good for the construction industry,” Colao said. “If in fact the tax reform results in corporate tax reductions, corporations may start sprucing up facilities, then there would be an uptick in activity. Corporations—and entities that are tenants in office buildings—if they are looking at an improved bottom line at the same revenue—they might look to increase their capital expenditures.”

However, as a part of the regulation, individuals will be limited in deducting state and local income taxes, sales taxes and property taxes to $10,000. Homeowners will be able to deduct mortgage interest on debt up to $750,000, down from $1 million. These segments of the bill don’t bode well for real estate interests in New York City, which has an average home sales price at $987,000 as of the third quarter, according to the Real Estate Board of New York. If people can’t reduce their taxes it will add to Gotham’s living expenses and could mean less people wanting to relocate to the city—lowering demand for more housing and impacting construction.

“New York and especially the New York City area is one of the highest areas for state and local taxes,” Wood said. “I think there is going to be a tendency for people to want to move to states that don’t have high state taxes, and with that, many corporations may think in order to get a good labor pool they’ll want to move their offices to those low-tax states.”

He added: “I personally think that people are going to have to stay focused on solutions to that problem, because it could have long-term adverse effects on the real estate industry and the construction industry in New York.”