Square Mile Lends $150M on The Dime Development in W’burg 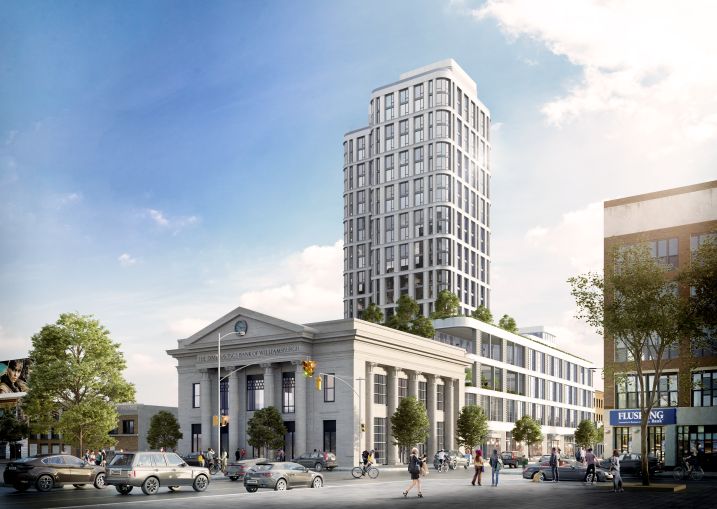 Tavros Development Partners and Charney Construction and Development have nabbed a $150 million construction loan from Square Mile Capital Management for The Dime, a mixed-use development in South Williamsburg, Brooklyn, according to an announcement from the lender today.

“This transaction provides us the opportunity to partner with two prominent New York developers on an exciting, market-leading project,” Sean Reimer, a vice president at Square Mile, said in prepared remarks. “The Dime is well-positioned to capitalize on the growing demand in Williamsburg for quality space with convenient access to transportation. The integration of the new tower with the historically significant bank building will create a truly one-of-kind product.”

The Real Deal first reported news of the construction financing.

As previously reported by Commercial Observer, Charney Construction & Development and Tavros Development Partners purchased three buildings at the site, plus the air rights above the bank, from Dime Community Bancshares for $80 million in March 2016. The buildings included in the sale—263-277 South 5th Street, 262-272 South 4th Street and 205 Havemeyer Street—were previously used as Dime’s primary back office operations center.

On Nov. 17, the developers closed on the $12.3 million acquisition of the historic bank building itself at 209 Havemeyer Street, property records show.

“We always wanted the bank building,” Sam Charney, a principal at Charney Construction told CO at the time of the acquisition. “It had been the icon for the Dime Savings Bank of Williamsburgh. They were hesitant to sell it in general; they really felt like it was part of their identity. Once they realized we were a partner that wanted to honor that history, they came around [to selling it]. We think it adds a tremendous amount of value to the project.”

The restoration of the 109-year-old 16,700-square-foot bank building will involve removing 1960s-era finishes, sprucing up the existing columns, and replacing an old pitched roof skylight with a  larger one.

The developers tapped 1 Oak Contracting to oversee construction, which is slated to commence in June and wrap up in the third quarter of 2019.

Square Mile is having not-too-shabby a year-end. Earlier this week, the lender announced that it had nabbed a new chief operating officer. Industry veteran Laurie Golub, formerly of HFZ Capital Group, will officially start in her new role on Jan. 8.