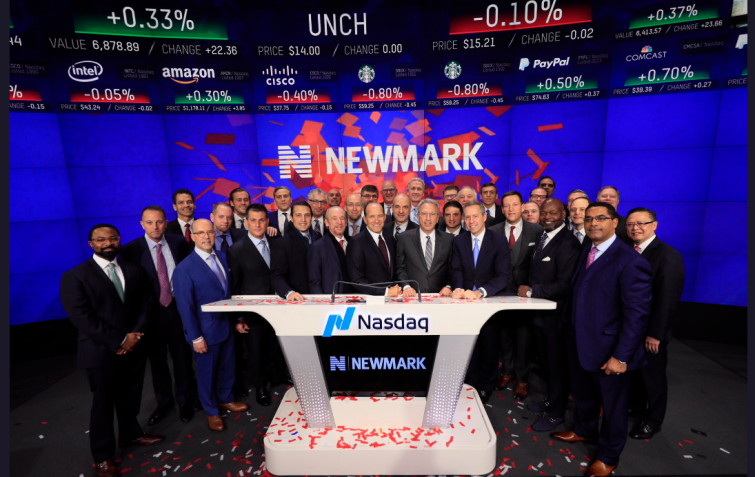 BGC Partners Chairman and Chief Executive Officer Howard Lutnick (who is also chairman of Newmark) and Newmark CEO Barry Gosin rang the opening bell at the Nasdaq in Times Square, where Newmark is listed under “NMRK.”

“This is a pivotal moment for us. I look forward to the future,” Gosin, who has been CEO of Newmark since 1979, said at the IPO. “I couldn’t be more excited about where we are going. I certainly know where we came from, which we’ll never forget. But where we are going is incredibly exciting.”

The IPO is expected to close on or about Dec. 19, according to a BCG Partners release. At closing, BGC anticipates it will own about 85.3 percent of Newmark’s Class A stocks. BGC will hold all Class B stocks, giving the company approximately 93.2 percent of the total voting power for Newmark.

The family firm began as Newmark & Co. in 1929. In 2005, it formed a partnership with London-based Knight Frank, thereafter becoming Newmark Knight Frank.

BGC acquired Newmark Knight Frank for an undisclosed amount in 2011. The following year, the company acquired brokerage Grubb & Ellis, and merged to become Newmark Grubb Knight Frank. (Earlier this year, it dropped “Grubb” from its name in a run up to become a public company, and Jeff Gural stepped down as chairman.)

Currently, Newmark has more than 4,600 employees in more than 120 offices and 90 cities in the United States, according to its latest public filings. The company also disclosed it had revenues of $1.3 billion in 2016 and through the end of the first nine months of 2017 the company had $1.1 billion in revenue.

“Our numbers will be clear. Our profits will be crystal clear. The comparisons will be clear. And no longer will Newmark ever be part of the small scrappy crowd fighting to get up to the top,” Lutnick said. “It will be crystal clear to everybody starting today and for every quarter going forward that Newmark is not only amongst the best, but is the fastest growing, is the most capable, has the most interesting things to say at every pitch.”