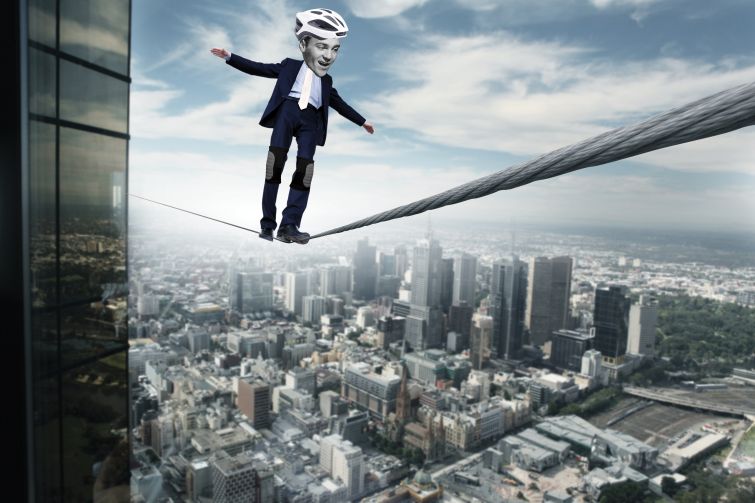 O.K., so the retail apocalypse might arrive with the next recession, the next earnings call or the next time a cold front moves through.

What’s a panicked trader to do about it?

The news is grim for real estate investors, according to bankers and economists who study the sector: There may not be an easy or straightforward answer for protecting yourself from the storm.

“One of the problems with real estate is that you can’t go in and out like you can elsewhere,” said Milton Ezrati, the chief economist for the financial communications agency Vested. “You’re buying a portfolio or a group holding. You have no liquidity to speak of.”

That presents a twofold difficulty for property owners when a sector like retail turns south. First, it can be hard for investors to build a portfolio with the right level of diversification to protect against a highly specific risk, like loan defaults among low-quality American shopping malls.

Unlike in the stock market, where an individual investor can buy into an index fund for $1,000, in real estate, no one but the largest institutions can afford to own a large and varied set of physical assets. Buyers of real estate investment trusts may face the opposite problem, taking on exposure to troubled segments they may wish to have avoided.

“If you’re in property, you’re by definition concentrated,” Ezrati said. “I don’t know of hardly anyone who owns hundreds of retail outlets across the country.”

The second problem is that timing the market—a daunting problem even in well-traded asset classes like equities or corporate bonds—is all the more difficult in a viscous sector like real estate. Even determined sellers might find it takes weeks, months or years to unload a portfolio—especially in a spooked market.

Refusing to allow the pursuit of a perfect answer to banish decent alternatives, retail bears have at times relied this year on an otherwise obscure tactic to protect against risk in the sector: bets on a set of indices, called CMBX, synthesized from options contracts on securitized commercial mortgages.

Introduced by the financial services company Markit in 2006, the CMBX indices are split by year of issuance. CMBX 1, for example, referenced a set of 25 fixed-rate conduit commercial mortgage-backed securities deals that closed in 2005. Broken into tranches to mirror the underlying transactions’ various rated classes, a CMBX index is designed to mimic the value of the underlying securities—just as the Dow Jones Industrial Average apes the U.S. stock market.

In general, the CMBX indices cover a representative sample of a given year’s conduit transactions. Today, with the retail sector under vastly heightened scrutiny, underwriting on retail CMBS loans is far more selective than it was earlier in the business cycle, and the CMBX’s more recent iterations—the latest is Series 10—offer less exposure to troubled malls.

But one historical series in particular, CMBX 6, which represents transactions that closed in 2012, happens to reflect a higher level of retail issuance than its peers.

Taking advantage of an index whose performance correlates with retail’s fortunes, investors this year began heavily shorting the indicator, buying insurance contracts against its collapse in much the same way that the traders chronicled in The Big Short bet against residential mortgage bonds.

The index “has definitely reacted to the headlines, so it has definitely been an effective way to state that negative retail view,” said Roger Lehman, a managing director at Credit Suisse who heads the bank’s CMBS research.

The bonds that CMBX 6 references have, in general, performed well. But the series has a significantly higher concentration among retail properties than its later peers, flagging it as an obvious barometer of the hot-button issue of retail decline.

“Early this year is when you saw a material repricing of Series 6 relative to the other indices, as well as relative to the broad credit markets,” said Will Goldsmith, a director at Credit Suisse. “[The index] keeps weakening with all of the noise around malls.”

Brian Phillips, the director in charge of CMBS research at AllianceBernstein, said that as the Series 6 loans have matured, the index has grown to become more representative of retail strife.

“The loans originated in Series 6 began life [with] a 63 percent loan to value, but through amortization, [debt levels decline] over the life of the mortgage, so you have all this effective de-levering,” Phillips said. But, because some lower-quality malls have begun to miss payments over the last few years, “you [still] have significant leverage in the retail space.”

That feature has drawn the attention of investors seeking to hedge against the risk of accelerating retail decline—a tougher proposition than it may appear. It’s not straightforward to stake out positions that will perform better the more malls that close, the AllianceBernstein banker said.

“Could [an investor] take a long position in warehouses or [a long position in] pure-play e-tailers?” Phillips said. “There might be another way to express that [negative] view [on retail],” but any such trade would require creativity.

Even so, in Phillips’ mind, those less direct approaches are a better strategy than a bet against CMBX. The problem? CMBX insurance contracts are just too expensive, he said.
The swaps follow a pay-as-you-go format, which means that those buying protection must pay ongoing premiums to maintain the position.

“If you’re going to be a protection buyer of [BB-rated CMBX tranches], you’re going to have to pay me a 5 percent annual coupon,” plus a large upfront fee, Phillips said. If the underlying loans incur no losses, “I’m going to be getting a yield of 14.3 percent.”

“In a world of low carry and tight spreads, it is a large coupon to pay out every month,” Goldsmith said. As a result, “no one is naked short [selling] these instruments.”

Instead, many investors have used the index to make short-term bets about market sentiment.

“If you’re a protection buyer and spreads continue to wider, you can exit at a better level,” Phillips said. “You can make money just by playing the momentum. The guys who came out with these white papers, they’ve done O.K.”

Those “guys” would be Alder Hill Management, a New York-based hedge fund run by Eric Yip. In February, The Wall Street Journal reported, Alder Hill shopped his short CMBX 6 bet to a group of Wall Street investment firms. The fund, according to the Journal, gained 8 percent in the first quarter of 2017—not because of rampant mall defaults but because bearish retail sentiment allowed the fund to sell its short positions at a better value.

A representative from Alder Hill declined to comment on the firm’s strategy for this story.

Because holding the position is so expensive, deciding when to get in and out can make or break the play.

“There is a healthy debate around the timing [of retail’s demise impacting CMBS],” Goldsmith said. “There are people in the camp that the issue will be near term—a year or two out—versus maybe a slim majority who view these only as maturity issues, which means it’s even further than four or five years out.”

“To maintain a hedge in the position in the long term would be onerous,” Ezrati said. “It’s only there for the panic moments.”

As a result, the level of the trade’s appeal has everything to do with investors’ varied views on retail. In all, the CMBX 6 short is better suited to hedge funds aiming for a risky short-term profit in momentum trading, bankers said, than institutions looking to hedge against downturns over a longer horizon.

And all agreed that the storm isn’t coming just yet.

“Retailers don’t want to be 100 percent online right now,” Phillips said. “They know that the conversion rate is higher in the store. Some [business] still needs to be conducted in the store.”

And the trend is more varied than at first blush.

“It’s noteworthy that more retail opened than closed in the last two years,” Ezrati said. “So the economy is creating some kind of retail demand. I don’t think this thing where Amazon swallows the world will happen quite as fast as people think.”

According to Phillips, “The point is, there’s an optimal mix” between retail and e-commerce. That idea leads him to believe that malls won’t disappear overnight.