Think Small: How Manhattan Office Landlords Are Courting the Market for Modest Space

From small-scale studios to prebuilts, property owners look to appeal to a shifting 'small-user paradigm' 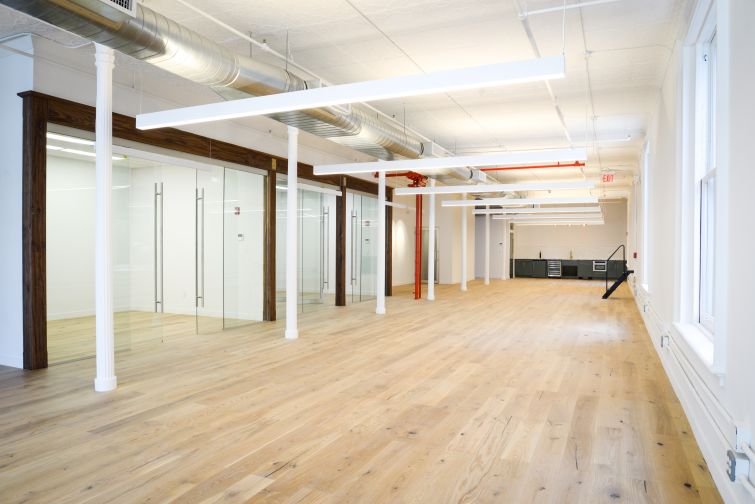 In the New York City office market, the big deals get all the attention. Landlords usually covet major six-figure-square-footage users who can lock down large blocks of space at their buildings, bringing with them the security of long-term leases that can anchor a property for a decade or longer. Brokers, meanwhile, covet the sizable commissions that come from representing such large-scale clients.

The reality, however, is that most of the city’s office stock is occupied not by major corporations leasing multiple floors at Class A Manhattan buildings, but by small-to-midsized businesses across a diverse range of industries that require more modest footprints.

The relatively modern phenomenon of coworking—initially popularized in the 1990s by Regus (now IWG) but revolutionized by WeWork and a whole crop of like-minded firms in recent years—has added another wrinkle to this equation. As the startup economy produces wave after wave of nimble new companies that have looked to coworking spaces to suit their needs, landlords have caught onto the trend and sought to capitalize—often through smaller, prebuilt office layouts positioned as both an alternative to shared office space and an option for young companies that have outgrown the coworking model.

“There’s been a shift in the small-user paradigm where players like WeWork are accommodating businesses that can be run out of a knapsack,” said Jay Caseley, an executive managing director at ABS Partners Real Estate and head of the brokerage and property management firm’s office leasing operations. “Several of our tenants are so-called graduates from that environment. When those people get tired of being in a crowd, they want to have some autonomy and privacy.”

At properties like 200 Park Avenue South near Union Square, owned by a group of ABS investors, Caseley said the firm has taken the approach of prebuilding units as small as 900 square feet in spaces that it inherited from larger tenants whose leases have expired. Such units not only meet certain tenants’ more limited space needs, but as prebuilts, they are also “more or less ready to move in” and are being leased out at terms usually no longer than three years—the sort of flexible arrangement tailored for nascent small businesses.

While noting that he would “shudder to not accommodate renewals to full-floor tenants,” Caseley said ABS has found success in catering to smaller office users. “We find that the smaller units rent more quickly, have less long-term issues with vacancies and give us a formula where we have a portfolio that’s attractive to [tenants] under the current market conditions.”

It is a formula with which other landlords and property managers have also found success. At the Adams & Co.-owned 110 West 40th Street near Bryant Park, the landlord, brokerage and property management firm is taking an approach more closely mirroring the coworking phenomenon—but with a more established twist.

Adams is pursuing a strategy where it is breaking up entire floors at the 26-story, 140,000-square-foot building into prebuilt suites ranging from 600 to 1,500 square feet. In addition, the company has equipped the building with features including a shared conference center and lounge area, as well as tenant-controlled HVAC systems and a full-time concierge.

“For a small tenant, the majority of the options are in coworking, but coworking isn’t for everybody,” said David Levy, a principal at Adams & Co. “When you have a real business that wants its own space, and the owner wants his own office, the ability to find that space is limited.”

Of the 27 such units Adams & Co. has built at 110 West 40th Street thus far, Levy said 26 have been rented out—mostly at lease terms between three and five years and at asking rents between $65 and $75 per square foot. He added that the company plans to eventually convert the entire building into small-scale prebuilt units.

“We are seeing much more variety than I thought,” Levy said of the tenancy in the building’s prebuilt suites, which includes not-for-profits and tech and design firms as well as financial companies. He added that several “older,” existing tenants at 110 West 40th Street have also opted to move into the smaller new suites, thanks in part to the building’s new features. “They’re downsizing their space, but they don’t need [their own] conference rooms anymore.”

The Kaufman Organization took a similar approach at 27 West 24th Street in the Flatiron District, where it took its 11-story, 125,000-square-foot building and divided the 12,000-square-foot floors into five or six prebuilt units per floor. “We’re the next step from the coworking environment to tenants taking their own spaces,” said Grant Greenspan, a principal and senior vice president at Kaufman.

In addition to offering shorter lease terms, Greenspan said the small-scale spaces at 27 West 24th Street are designed to offer financial value for tenants. “In a coworking environment, between what [coworking providers] are leasing you and the common areas and the amenities, it’s in the $80 to $90 per square foot range,” he estimated. “The thesis [at 27 West 24th Street] is you come in and take 3,000 square feet, and you’re paying $55 to $65 per square foot.”

Greenspan and other market participants noted that the small-scale office model is not a one-size-fits-all approach, as larger tenants locked into longer leases remain an integral part of most commercial landlords’ business models from a financial perspective. Buildings catering mostly to smaller tenants can also run the risk of turning into an office version of a “hotel” if spaces “keep turning over too quickly,” Greenspan said, adding that landlords must also look to build out their prebuilts somewhat “generically” so that they “don’t get caught continuously renovating and repositioning” spaces. “You have to be cognizant of staggering your lease expiration, too,” he added.

But the city’s office market at large—not just the small-space niche—has shown heightened appetite in recent years for prebuilts, too, according to Nicole LoRusso, CBRE’s director of research and analytics for the tri-state region. LoRusso cited figures indicating that, in Midtown Manhattan specifically, the amount of prebuilt space taken by tenants has grown roughly 30 percent from 2015.

“Tenants don’t want to wait six to 12 months to execute a buildout,” LoRusso said. “For a lot of tenants, [prebuilts] are appealing. They don’t know what [their company is] going to look like in the future. The flexibility of not having a long-term commitment and also recognizing that, if you need to grow by 2,000 square feet, you can sign and get that space three weeks later—that’s what’s appealing about it.”

For developers like Josh Caspi of Caspi Development, smaller-scale prebuilts have become a boom business that the market has come to demand. At 79 Walker Street in Tribeca, the firm is taking an approach that has previously served it well at small-scale office projects like 135 Bowery and 161 Bowery on the Lower East Side.

“The thing I learned as a landlord of large buildings is that there’s no love for this-sized tenant,” Caspi said on a recent tour of the building, which includes a private roof deck for the top-floor tenant and a 3,600-square-foot ground-floor retail space that will be anchored by Chicago burger sensation Au Cheval.

Caspi said that leases at the building generally run between five to seven years at rents in the mid- to high $60s per square foot, with the landlord—like other developers operating in the smaller-footprint market—taking a larger security deposit to offset the risk of its business model. But the prebuilt strategy also means that “turnover costs are less,” according to Caspi, as tenant improvements won’t be required every time a space changes hands. “If you lose a tenant, you just fill it up the next day,” he said.

And then there are real estate startups that are specifically targeting the small-to-midsized tenant space, buoyed by the belief that they understand the needs and requirements of such office users in a way traditional landlords do not.

Knotel is a startup office provider that has grown at a prolific pace this year since sealing a $25 million Series A funding round in February. (Disclosure: Observer Capital, led by Observer Media Publisher, Chairman and Chief Executive Officer Joseph Meyer, is an investor in Knotel.) The company has nearly 500,000 square feet of office space currently under lease in New York City, which—unlike coworking providers such as WeWork—it subleases as single-tenant spaces under short-term agreements.

For Amol Sarva, Knotel’s co-founder and CEO, landlords attempting to get into the small-tenant game are chasing a trend that they’re ill-equipped to serve, since they lack the “uniform product experience” offered by Knotel.

“We actually run the office for you—everything about the space is thought about and designed by us, for you,” Sarva said. “We source and deliver all the supplies, services and utilities. We staff the place and know your people. We help them get in, in the morning, and lock up at night. If the building isn’t performing, we take it up with [the landlord]. There’s a whole [real estate] department of your company that you don’t need.”

Traditional landlords, by contrast, mostly provide a lower quality of service and at higher costs than Knotel, according to Sarva. “The only thing they can do is make small boxes and have someone meet you out front [at a reception desk],” he said. “It’s like individual taxi drivers trying to compete with Uber; as the lease becomes the taxi medallion of the office market, these buildings will become taxis.”

Knotel is hoping to further expand its business to the tune of 1 million square feet of office space under lease by the end of the year and recently announced its expansion into the San Francisco market. With small-to-midsized office users fueling the real estate startup’s rapid rise, it would appear that the limited-scale office market is growing more influential than ever.

But Scott Galin, a principal and CEO at Handler Real Estate Organization, said that his firm—which owns a portfolio of office buildings mostly located in the Midtown West area—has been serving that segment of the market for years. At 315 West 39th Street in the Garment District, Handler has converted the entire 16-story, 140,000-square-foot property into small-scale studio spaces averaging between 800 to 1,200 square feet.

Like most buildings in its neighborhood, 315 West 39th Street was formerly a garment factory. But Handler gradually transformed the entire property over the course of the 2000s, several floors at a time, into spaces that were initially occupied mostly by creative and design tenants and now also hold nonprofits and accounting firms.

Today, the building has roughly 140 tenants, which Galin said were drawn to the building’s loft-like spaces and “communal” vibe, as well as its proximity to transit hubs like the Port Authority Bus Terminal and the general transformation of the West Side into a desirable place to do business.

“It took off by itself,” Galin said of the firm’s approach to the property. “It was clear that there was a demand for small space between 500 and 1,500 square feet. These tenants want to be in a cool neighborhood and around mass transit.”

Handler signs most of its tenants at 315 West 39th to leases under five years in length—“When you have so many spaces, tying things up long-term can tie you up long-term,” according to Galin—at asking rents in the mid-$30s to low $40s per square foot. With around 95 percent occupancy, Galin said Handler has never had reservations about relying on such a varied and fragmented tenant base instead of larger users on leases promising longer-term cash flows.

“Having 10,000-square-foot tenants are neat—until you lose that tenant,” he noted. “If somebody wanted to come here and lease a third of the building, we’d have great reservations.”