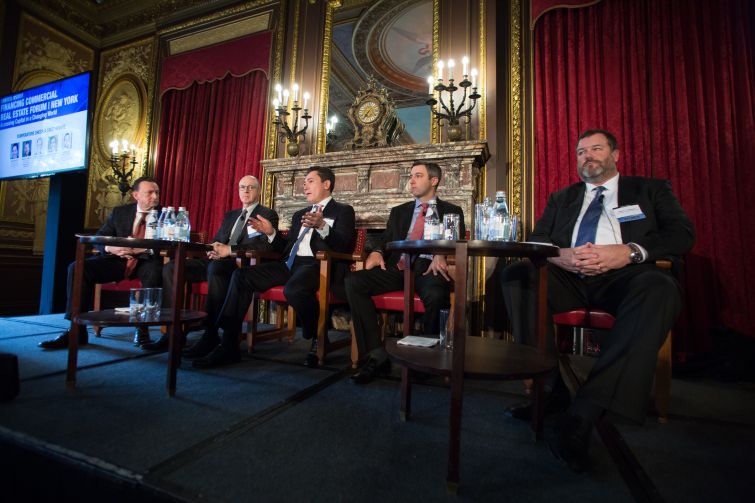 The holidays may be fast approaching, but December 24th isn’t only the day to put out milk and cookies for Santa. It’s also the one-year anniversary of risk retention’s implementation. Almost one year after the regulation kicked in, industry experts weighed in on the current state of the CMBS market at the Temperature Check: A CMBS Update panel at Commercial Observer’s Financing Commercial Real Estate Forum.

And, it looks as though the market is doing just fine. “CMBS has become the cheaper source of capital and so it’s a first resort for borrowers,” Matthew Masso, the head of commercial real estate finance at Credit Suisse.

In fact, risk retention has had minimal impact since its inception, Larry Kravetz, Barclays’ head of CMBS, said: “We’re a resilient market and a lot of banks have figured it out. The market has adapted.” Kravetz went on to say that while Barclays can hold the vertical risk retention slice, the bank would prefer not to. “You’re holding pro-rata loss and that has to pass credit-muster,” he said.

Masso weighed in, saying he has been “pleasantly surprised” by the number of investors willing to be the horizontal piece buyer. “They’re happy to buy that risk,” he added.

Despite the temptations of a bull market awash with capital and participants, discipline exists in the industry, panelists agreed.

Market participants are incentivized by quality distribution, David Bouton, the co-head of U.S. CMBS and real estate finance at Citigroup, said and underwriting standards are air-tight. “There’s more awareness regarding how we underwrite loans,” he said,

Additionally, mortgage brokers aren’t looking for the “crazy, outlier bid,” in deals today, Kravetz said, as those outlier bids don’t come with any comfort or certainty in being able to close. “Outlier bids are looked on with skepticism, and that’s a good thing.”

And that skepticism could be one reason that the market isn’t reminiscent of the 2007 boom, Masso said, noting that—whether it’s a partly result of risk retention or more investors entering the space—leverage has actually gone down.

Brian Hanson, the managing director of client management at CWCapital Asset Management, concurred. Hanson said he sees much more sophistication and “bells and whistles,” in loan servicing documents today, paired with investors’ desire to see data in real time. “The feedback loop is constant,” he said.

Despite CMBS’ reputation as tricky terrain to navigate should you run into difficulties with your loan, Hanson believes the industry is gradually offering a more comfortable borrower experience–in newer deals at least.

“There are ongoing efforts to improve efficiencies,” he said. Due to the multiple of approval that still exist, borrowers can still expect a delay in response time to any requests into servicing shops however, he cautioned. But while antiquated language exists in pooling and servicing agreements, newer deals are removing some of the parties included in consents, for example, where some items have no relevance to special serving functions.

From a lender perspective, “we all have to take responsibility and on our end make loan documents as clear as they can possibly be,” Masso said.

Moderator Brian Olasov, an executive director at Carlton Fields, asked Hanson whether character, one of the five “Cs” of credit, still counts when assisting borrowers. “Is character the same as putting more capital in?” Hanson joked, but said the ability of the sponsorship to be part of a loan’s solution is critical. Hanson also said defaulting on a loan doesn’t necessarily break a borrower’s reputation, and that servicers more clearly remember how that borrower behaved through a prior default.

And Kravetz took a moment to give props to CMBS borrowers who returned to the market post-crisis. “Some of them went through hell in 2007,” he said.

With CMBS issuance expected to reach $90 billion to $95 billion in 2017, the panelists were asked to wrap-up the discussion with 2018 issuance expectations. With the wall of maturities behind us and less need for refinances, Kravetz said he expects that issuance will be down in 2018, coming in around the $75 to $80 billion mark. Bouton predicted $70 billion in issuance, while Masso expects issuance to be flat in 2018, with an increase in single-asset CMBS deals.