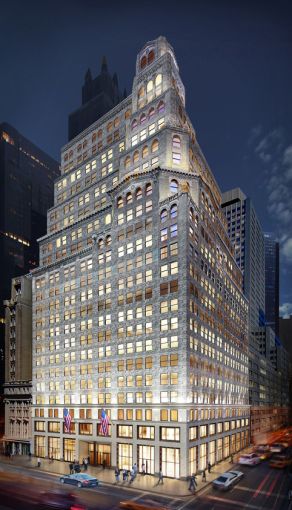 RFR agreed to a five-year, fixed-rate loan on the property, which is located between East 40th and East 41st Streets.

In structuring the deal, KTB was joined by Natixis, which co-originated $270 million of the loan’s senior tranche. The Real Deal first reported Natixis’ portion of the senior loan earlier this month.

Talmage, which advised KTB on the transaction, provided Commercial Observer with details of the loan’s size and its Korean backing.

“This [deal] continues the trend of Korean investors directly providing capital to U.S. sponsors of commercial real estate,” Edward Shugrue, the chief executive officer of Talmage, said in a statement. “With attractive rates and an increasing track record of transactions, we expect Korean investors to continue to be active players in providing real estate debt capital in the U.S.”

Talmage declined to identify the other Korean companies who participated in the subordinate financing, but said that they were in the life-insurance industry.

Five years ago, RFR purchased the then-vacant building, built in 1926, for $189 million, and spent $65 million to renovate it in 2013, according to the property manager’s website. Improvements included “a comprehensive lobby renovation, new mechanical systems and infrastructure, elevator and cab replacements, upgrades to all common areas and reconfigured cores and new bathrooms on each floor.”

An amenities space for tenants includes a private dining room, a gym and a roof terrace. Ground-floor retail space is currently leased to a steakhouse, a community bank branch, and Dr Smood, a health-focused cafe chain.

Representatives from RFR,  Natixis and KTB did not immediately respond to requests for comment.