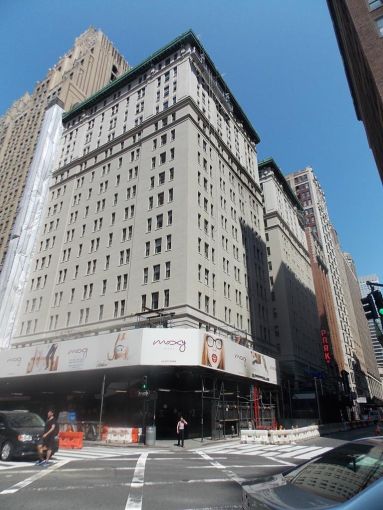 Goldman Sachs has provided The Lightstone Group with a $262.2 million financing package for the company’s repositioning of its planned 618-key, flagship Marriott Moxy Hotel at 485 Seventh Avenue.

The new financing provides a $57.2 million gap mortgage and consolidates a previous $205 million construction loan made by Square Mile Capital Management in January 2016, according to records filed today with the city’s Department of Finance.

“Marriott is the leader in defining the next generation travel and lifestyle space and Moxy hotels are fun concentrated-format lifestyle hotels with smartly designed and technologically advanced rooms, coupled with generous socially activated public space,” Lightstone President Mitchell Hochberg told CO at the time of the Square Mile deal. “Our partnership with Marriott puts Lightstone at the forefront of the rapidly growing lifestyle hotel sector in the New York City area.”

Property records show that Lightstone originally acquired the 16-story, Times Square office property between West 36th and West 37th Streets in 2014 for $182 million. The building was constructed in 1907 as a 1,885-unit single-room occupancy building. While the building was converted into retail and office in the 1980s, its original design and H-shape floor plate is well suited for a hotel conversion, according to a news release.

The Lightstone Group is developing four Moxy Hotels in partnership with Marriott International in New York City. In December 2016, Lightstone landed $53 million in construction financing from Bank of the Ozarks for a Moxy Hotel project at 105-109 West 28th Street in NoMad, expected to open at the end of this year. The firm also filed plans with the city’s Department of Buildings in September 2016 for a 13-story, 311-key Moxy at 112 East 11th Street between Third and Fourth Avenues, that’s expected to open late next year. Marriott’s website also highlights the opening of two additional Moxy’s, one each Downtown and on the Lower East Side (both slated to open next year).