Developers Look on the Bright Side of South Florida Despite Hurricanes 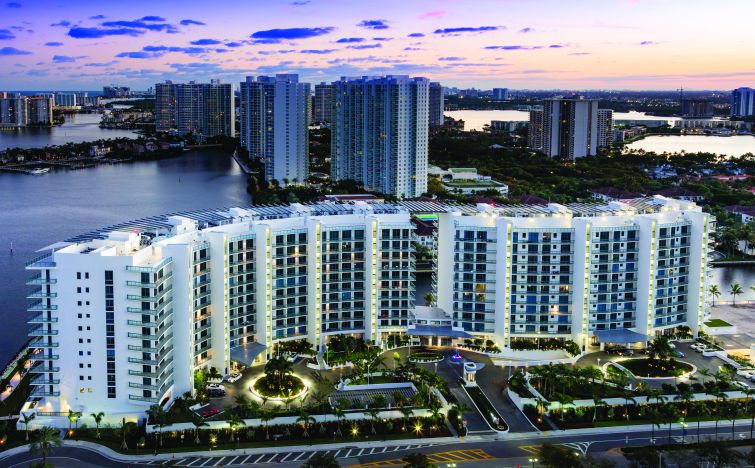 Leonardo DiCaprio wants you to consider this: Miami may soon become the new Atlantis.

South Florida as we know it could be washed away by rising seas, DiCaprio warns in his 2016 climate change documentary, Before the Flood. “When you look at places that are the most susceptible to sea level rise, especially in the United States, Florida is the key one.”

And for those able to deny or blithely shrug at melting icecaps and rising sea levels, there is a more immediate symptom of climate change that is far more difficult to ignore: hurricanes.

This September, the Americas saw the most active Atlantic hurricane season on record, according to the Weather Channel. First, Hurricane Harvey smashed Houston, becoming its third “500-year storm” in just three years. Irma caused headaches on the west coast of the peninsula and devastated the Florida Keys and the Caribbean. It was the most intense Atlantic hurricane to strike the United States since Katrina in 2005. The island of Barbuda was 95 percent destroyed by Irma. It was immediately followed by yet another category 5, Maria, which created a major humanitarian crisis in Puerto Rico. Hurricane Jose, a category 4 and the longest-lived Atlantic hurricane since 2012, in comparison barely made the storm-weary news.

But even as the barometer dial points closer and closer to apocalypse, experts in Miami’s real estate sector tell the Commercial Observer that they see a silver lining through the storms.

“South Florida faired a lot better than the Caribbean,” said New York-based real estate investor Don Peebles of Peebles Corporation as he drove past battered foliage and downed power lines on the section of highway west of Fort Lauderdale, Fla., known as Alligator Alley. “It will probably do pretty well because St. Martin is decimated. Anguilla, St. Barth’s, the Virgin Islands—all severely damaged. The situation in Puerto Rico is catastrophic. So, people who vacation in the Caribbean, I think they are going to look to South Florida. If people are pursuing climate, then think about it: California, wildfires and earthquakes. Then there is Florida with no state income tax. Overall, hurricanes are inconvenient, but they don’t happen too often.”

Peebles, who said his Coral Gables home lost power during Irma but was otherwise undamaged, is so confident in the enduring draw of the area that he is working on a deal to develop a new boutique hotel in Naples, where there isn’t as much competition in the pipeline. Last year, the Miami Herald reported that he tried and failed to bring a $250 million mixed-use project to Miami’s Overtown neighborhood after a deal with the Miami Community Redevelopment Agency went sour. Meanwhile, he said he is still eyeing the Miami market—where he recently listed the historic Bath Club on Miami Beach for $25 million—with caution.

Although the storm seems not to have been a stake through Miami’s heart, that caution is still probably warranted. The Miami market shifted into low gear last year, and it’s been slow going ever since. A Douglas Elliman report shows that in the third quarter of this year the number of residential sales in the area declined 11.8 percent to 690, even as listing inventory increased marginally. The number of days a listing sat on the market also increased in the three months, to 139 from 120. The average sale price sat unchanged at $868,404. And the report points at—you guessed it—Hurricane Irma, which delayed closings, as the culprit.

On the verge of a $100 million initial public offering, Newmark Group’s multifamily-financing business, Berkeley Point Capital, took a dive in the third quarter. Berkeley’s revenue gains from its mortgage business in that quarter dropped 30.5 percent to $45.5 million. Again, they cited hurricanes in Texas and Florida.

“This year we have a one-off anomaly, which I guess is the combination of hurricanes in both Texas and Florida, that effectively softened those two markets,” Howard Lutnick, the chief executive officer of BGC Partners, Newmark’s parent company, said on an earnings call, according to The Real Deal.

“The market has been tough all year. It’s been like this for a while,” said PMG Principal Ryan Shear, who built the residential and mixed-use developments Echo Aventura, Echo Brickell, Muse Residences, all in Sunny Isles and Sage Beach in Hollywood, as well as Vice in Miami and X Las Olas in Fort Lauderdale. “On the multifamily side, the market is pretty decent. But on the condo side, we are seeing less new starts and a lot of inventory. We are at the end of the cycle.”

But even Shear thinks that he can see blue skies beyond the storm. In fact, every developer and speculator with whom CO spoke in the Miami marketplace said that Irma could perversely be the best advertisement for South Florida’s robust infrastructure they’ve seen in years.

“Sliding doors are so heavy, it’s hard for your old grandma to open one,” Shear said of the building code for weather-resistant doors. “We are built to the toughest code globally. It’s expensive, but it means hurricanes just don’t have a big effect on the Miami market. If anything, Miami is probably the most resilient place in the world when it comes to hurricanes.”

And its not just PMG that’s building away, storms be damned.

“I have lived in Florida for 40 years. The last time we had a hurricane was 2005. It’s just not something we think about,” said Rob Siemens of the Siemens Group, which developed Akoya Boca West, a 116-unit, full-service condo building in Boca Raton. He said that the media sensationalized the impact of Irma.

“The Keys got hit really hard,” he said. “But that is a narrow stretch of land surrounded by water. Obviously, it was a big storm, and we got lucky, but at our building there was no damage. None. Nothing.”

He said that for the buyers at his developments (which comes with access to the Boca West Country Club with its four designer golf courses, 31 tennis courts, a 400,000-square-foot club house, a world-class spa and a steak house), hurricanes just aren’t a game changer. In fact, he said 10 buyers have come into Akoya to pick their finishes since the hurricane. And in that time, even more potential buyers have eyed the offerings in the sales office.

“People aren’t deciding to not live in Florida because there might be a hurricane. That just isn’t happening,” he said, noting that properties built directly on the beach tend to suffer more than beach-adjacent developments like his. “There is no doubt that anything on the water is going to be impacted. I am not saying global warming isn’t a concern, but I am not of the belief that South Florida is just going to get wiped off the map. Look at [Superstorm] Sandy. It did a number on New York. Hurricanes are just a reality for coastal cities.”

Talia Bejarano, who splits her time between Israeli, London, New York and South Florida, isn’t particularly concerned either. She recently purchased a condo in Akoya to avoid New York winters and said the word “hurricane” never crossed her mind.

“If I thought that way, I wouldn’t have a house anywhere,” Bejarano said. “Every place in the world has one sort of danger or another. You buy the most beautiful house in the Caribbean, and it is washed away. You buy something in California, and there is a fire. You buy something in Europe, and there is terrorism. Things happen. But I am absolutely convinced I bought in the best building possible in the best place possible. I am confident in the infrastructure of South Florida.”

Even builder behemoths like Related Group are caught up in the “it only gets better from here” narrative.

At seven large residential buildings, Related Group claims to be selling 10 to 20 units a week, which isn’t bad, but is admittedly much slower than the 100 or so units the used to sell in a week. Still, Carlos Rosso, the president of the Related Group’s condo development division, said that market fundamentals are what gives him confidence.

“What is very good about this market is that there is no real systemic risk,” he said. “No bank has notes in its portfolio that are worth less than the collateral.” It’s a slower market, there is a lot of supply, but it’s a cash market. The structure of transactions is completely different than in the previous market. In the previous market we would borrow 90 to 95 percent of the cost of the building. Now, those loans are maximum 50 percent. So most of the development from this cycle has been developed with cash and deposits from buyers.”

That confidence is also the result of years of good branding that has now been tested and proven by Irma, according to superbroker Louise Sunshine, who founded Corcoran Sunshine, helped President Donald Trump open his first office in Manhattan and is now a consultant for the Four Seasons in South Florida.

“If hurricanes scare a buyer, they don’t come to Florida in the first place,” she said. “I don’t know where they go. Maybe they go to Georgia.”

The Four Seasons Surf Club on Collins Avenue in Surfside—a section just north of Miami Beach before Bal Harbor—where prices reach $4,000 per square foot, is now 80 percent sold, Sunshine said. The Four Seasons Private Residences Fort Lauderdale will break ground in a month. Neither property experienced damage in September—the worst they could report was a sign blown over in Fort Lauderdale.

“The Four Seasons brand is almost stronger than any hurricane,” she added. “It is astonishing.”

She recalls learning just how important good branding is in the days after the terrorist attacks of 9/11. At the time, Sunshine was living in Manhattan and working on selling apartments at Related Companies’ Time Warner Center, then under-construction. After the attacks, Sunshine said, sales at the south tower of the project stopped. But at the north tower, which features a Mandarin Oriental-branded hotel, sales went on “stronger than ever.”

“If you have the right brand,” she said, “it maintains its stability, even in these questionable markets.

“Do you really want to know what has happened since the hurricane?” Rosso added. “I heard that Richard Branson is moving to Miami. I’m serious.”