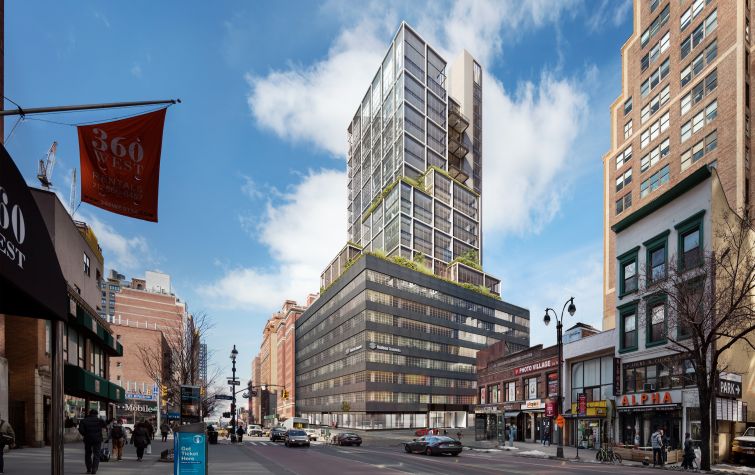 Cove Property Group and its equity partner, Boston-based hedge fund Baupost Group, have secured a whopping $479 million non-recourse loan for construction at 441 Ninth Avenue, which they will rebrand as Hudson Commons, Commercial Observer has learned.

HFF negotiated the financing on behalf of Cove. Michael Gigliotti, a senior managing director at the brokerage, declined to give its terms, but said that it follows the contours of a typical construction loan.

The Cove-Baupost partnership bought the property, situated between West 34th and West 35th Streets, for $330 million in 2016 from insurer EmblemHealth, which had occupied the entire building. The current structure comprises 423,000 square feet on eight stories, but Cove plans to redevelop the property by adding an additional 17-story structure atop the building, expanding the total square footage to approximately 700,000.

Internal demolition has already begun, according to Kevin Hoo, a managing partner at Cove. Construction will begin on the new tower in January, he said, and the entire building will be tenant-ready by the end of summer 2019.

Meanwhile, Cove hopes to begin leasing the lower eight stories by the end of next year, even as construction continues on the tower. Cove has maintained the building’s certificate of occupancy, which Hoo said will make the lease-up relatively hassle free.

“This is a very diverse type of building that should attract all types of tenants,” Gigliotti said, noting that its location between Hudson Yards, to the west, and Penn Station, to the east, would make it an attractive destination for commuters.

As a result, Gigliotti said, lenders competed fiercely to back the project.

“It was a highly contested process,” Gigliotti told CO. “All the big names in the construction lending space were interested.” Apollo, he added, had already been involved in the project as a partner that funded, along with Deutsche Bank, the $220 million bridge loan for the property Cove inked in 2016.

Gigliotti noted that Apollo also offered “new features” in its financing package, but declined to give details.

Hoo said that a variety of companies have already courted Cove for office space at Hudson Commons.

“We’ve been entertaining a number of large tenants,” the Cove founder said. “They include fashion, technology, media and infotech [companies], along with a bunch of traditional banks.”

“Our floor-by-floor lease-up plan meant that we could diversify [our tenants] and mitigate the downside risk,” Hoo said. “That business plan helped lenders get comfortable.”

HFF’s deal team was led by Gigliotti, Geoff Goldstein and Michael Tepedino. Gigliotti said that Ben Gray, who was unavailable for comment, spearheaded the financing for Apollo.

The Baupost Group, Cove’s equity partner, is a secretive hedge fund that the Wall Street Journal called one of the world’s largest in 2014, when it managed $27 billion. The fund has made headlines recently for confirming that it owns nearly $1 billion of troubled Puerto Rican debt. Officials at the firm did not respond to a request for comment.

Hudson Commons is the second major New York property for Cove, which was founded in 2015. Last year, the company purchased 2 Rector Street, a 26-story, 470,000 office tower in lower Manhattan, and rebranded it as 101 Greenwich.