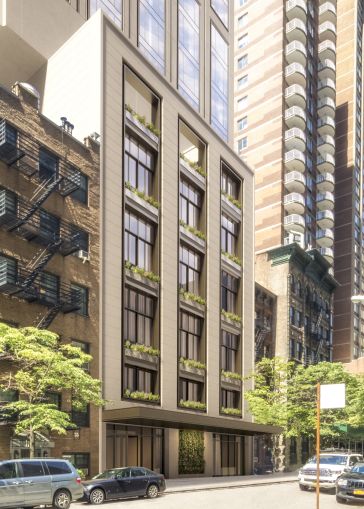 A rendering of the base of the Sutton 58 tower at 430 East 58th Street. Credit: Gamma Real Estate

The City Planning Commission on Wednesday approved a revised rezoning proposal that aimed to cap the scale of Gamma Real Estate’s planned 800-foot-tall residential tower at 3 Sutton Place and limit the scope of future skyscraper development in the Sutton Place area.

Both proponents and opponents of the proposal—brought forth by the East River Fifties Alliance and certified by the CPC on October 2—scored small victories with the decision, ahead of it being advanced to the City Council for consideration.

Under the revised proposal’s stipulations, any new development in Community District 6—from east of First Avenue and north of East 51st Street—that’s allocated more than 25 percent of its total floor area to residential uses will have to follow “tower-on-a-base” requirements, which mandates that 45 to 50 percent of the building must be built below 150 feet. The initial rezoning proposal the ERFA introduced in June 2016 called for a 260-foot height restriction and the inclusion of a significant portion of the tower to affordable housing.

With the vote, Gamma President Jonathan Kalikow tallied a small triumph in what’s been a two-year-long battle over the acquisition and development of the site. The CPC voted to grandfather Kalikow’s project, adding a provision that exempts buildings currently undergoing development in the area. This allows his firm to proceed with construction on its planned 67-story tower dubbed Sutton 58—located at 430 East 58th Street between First Avenue and Sutton Place—while halting any future similar development in the area.

Still not satisfied, Kalikow, who’s been a staunch opponent of the by products of the proposal, saying it sets a bad precedent for future development across the city, said in a statement, “While we wish that the City Planning Commission had rejected the ERFA’s application outright, we appreciate that they have decided to grandfather our project, which will not only ensure that our as-of-right development can move forward, but also protect the jobs of the hundreds of workers who are relying on construction of our building to move forward.” Kalikow will move to complete the building’s foundation before the proposal reaches City Council so to safeguard the project from any possible amendment to stop its construction.

Councilman Ben Kallos, who represents the residents of Sutton Place and cosigned the ERFA’s proposal, told CO after the CPC’s vote that although he’s ultimately pleased with the result, there’s more to do.

“I’m grateful that this matter has been addressed by the CPC as this has been a years long process,” Kallos said. “We received public guidance from CPC and followed that guidance, putting forth tower-on-base provisions. I’m grateful they voted it out. We now must move as quickly as possible through the city council as there’s a race afoot.

“I do not believe the zoning area should be grandfathered [to allow Gamma’s development],” Kallos added. “I intend to recommend it be removed, and I hope to pass it out of the council without any grandfathering clause.”

Kalikow added: “As this application now moves to the New York City Council for a vote, we call on our Council Members to also put aside the politics and influence of the handful of New Yorkers who are leading ERFA’s self-interested charge and consider these many more lives who are depending on our project. We hope that they will follow the CPC’s suit in allowing us to continue with our development.”

The ERFA argued in its proposal that the development restrictions “would more closely align future construction with the existing built environment, while still accommodating reasonable growth.”

ERFA President Alan Kersh called the CPC’s decision to grandfather the development “inappropriate,” adding in a statement that “the Commission should have approved the zoning change as it was presented and left any decision about grandfathering the Gamma project to the Board of Standards and Appeals.”

Real Estate Board of New York President John Banks told CO just before the CPC’s October 18 hearing of the proposal, “[This proposal] would provide an opportunity for people who have the means to mount a challenge to try this method of spot zoning going forward… it becomes a tool for people to use against any undesirable development. We’re concerned that there is no comprehensive planning that would take place if this becomes more of a norm.”

The ERFA’s proposal is backed by several community representatives, including Manhattan Borough President Gale Brewer and Kallos. New York State Senator Liz Krueger has cosigned the proposal, and recently, New York Congresswoman Carolyn Maloney signed on in support of the ERFA’s mission, having already written and voiced concerns to the CPC on the organization’s behalf, according to an ERFA spokeswoman.