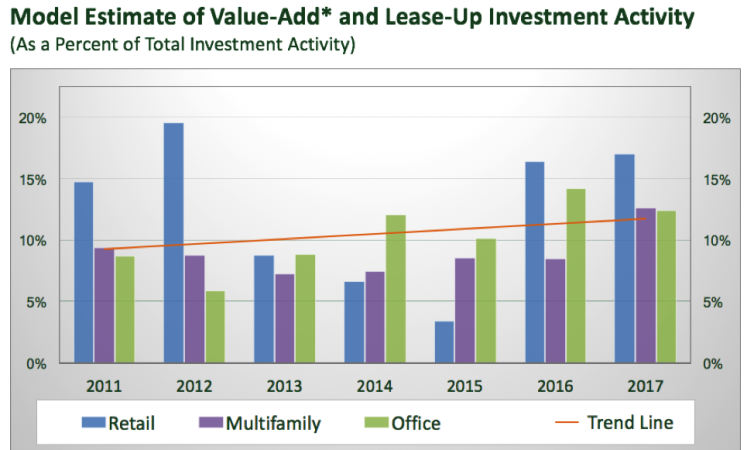 Chandan discussed how the current CRE market has slowed somewhat across the board, with a modest decline in overall lending activity. In rentals, vacancies are up from recent figures, although historically, they are still close to record lows.

In the multifamily class, a lot of inventory has come online, but it’s been absorbed because fewer households are moving into home ownership. The bulk of new households consist of renters. New construction has largely come in the urban, Class A, high-rise multifamily sector – less in suburban areas. In the next decade, we’ll

see an abundance of studios and small one-bedrooms.

Kominski addressed valuation parameters for bridge lending, noting BBG uses three estimates of value – As Is, As Complete, and Stabilized Value. She spoke about how, when looking for ways to increase value for non-stabilized apartments, one must look at cost to achieve stabilization – you can acquire the property at a price that makes sense given capital outlay, including the amount for profit or risk, for the deal to make sense.

Determining appropriate profit or risk rate is difficult – it could require discounted cash flow, with maybe a higher internal rate of return, on an “as is” basis vs. stabilized.

Ottaviano discussed Arbor’s basic bridge loan terms – $5M minimum, underwritten to an exit loan – and said that Arbor prefers to be at 75 percent of stabilized value, because they’re underwriting to the exit loan. Pricing can be difficult to determine, he said, noting they’re high 4s to low 5s over LIBOR. Deals are structured so it’s advantageous for borrowers to come back to them for exit loans.

Ottaviano discussed Arbor’s basic bridge loan terms – $5M minimum, underwritten to an exit loan – and said that Arbor generally underwrites to 75 percent of stabilized value. Pricing is determined based on business plan, and experience, noting they’re 4s to low 5s over LIBOR. Deals are structured so it’s advantageous for borrowers to come back to them for exit loans.

Ottaviano says Arbor is bearish on retail, although there is some neighborhood retail that will always do well, such as grocery stores and community strip centers. He is also concerned about declining cap rates.

On the subject of what’s available for bridge financing for those seeking HUD financing, Ottaviano said that Arbor has a program specifically designed to go to HUD. This gives more leverage, but a HUD application is required.

As far as bridge loan leverage, Ottaviano said that that most deals are 80% and under, although some transactions warrant higher leverage.

As far as bridge loan pricing, Ottaviano said that the upper end of the range is probably 80 percent loan to cost.

In terms of which asset classes are best suited to manage their way through a market correction, Ottaviano noted that the industrial market will always be solid, and Kominski agreed while also citing multifamily, since “people always need a place to live.”

To access the on-demand version of the webinar visit commercialobserver.com/bridge.