Black Friday Sales Boost May Not Save Struggling Chains

After an abysmal year for retailers, this holiday season will be make or break for those teetering on the brink. 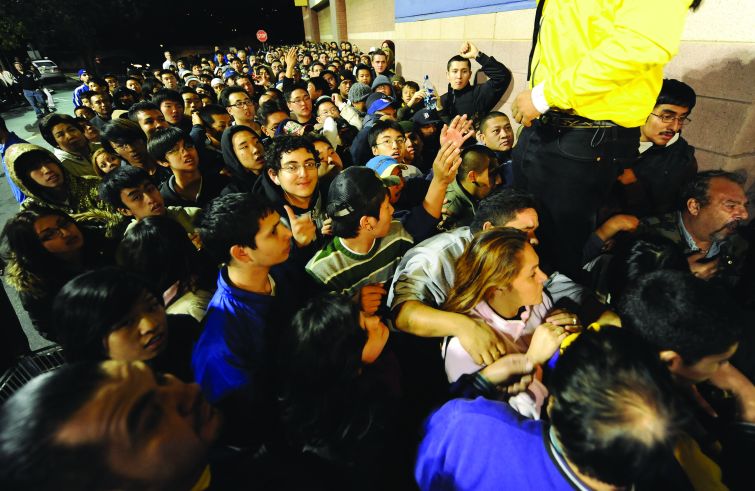 Even during the worst economic downturns, Black Friday has always provided a chance at redemption for retailers: an opportunity to turn a slow year into a profitable one.

Still, the overall consumer-spending outlook is good. Retail sales are expected to increase 4.2 percent over last year’s numbers with e-commerce sellers taking 18 percent of the pie nationally, compared to 17 percent last year, according to retail analyst Garrick Brown at Cushman & Wakefield. Consumer confidence has reached its highest level in 17 years, and wage growth has been constant for two-and-a-half years.

“The problem is that, even though we’ll almost definitely see an increase in sales over last year, it’s not going to make a difference for some retailers,” he explained. “All of the analysts and prognosticators are pretty much lined up in agreement: For retailers that are heavily in debt or have been struggling, they’re not going to be the ones that are driving these numbers. There’s a number of retailers that are facing do-or-die Christmases.”

This year’s holiday shopping season is going to be a make-or-break one for Sears, Brown said. The Chicago-based department store chain hasn’t posted a profit since 2010 and lost $2 billion this year. Sears Holdings, the parent company of Kmart and Sears, seems headed for bankruptcy court even after closing 125 Kmarts and 51 Sears stores this year. And they’re far from alone. Toys “R” Us filed for bankruptcy in September, staring down the barrel of $5 billion in debt, half of which is owed to toy manufacturers. Brisk Christmas sales might buy Sears and its cash-strapped contemporaries another year or two, but the temporary financial boost is unlikely to rescue those companies from financial quicksand and mass store closings.

“If they don’t make any profits on the sales, then it’s not going to change this retail apocalypse narrative we’ve been seeing,” Brown predicted. “By the end of the year we might see 9,000 chain store closures.”

Bankruptcies have also pushed down prices at shopping centers across the country.

“When one retailer has a going out of business sale, it tends to hurt the other retailers in the same space, because they’re forced to lower their prices in order to compete with the store that’s selling their goods for fire-sale prices,” explained Savills Studley’s chief economist, Heidi Learner, who added that the going-out-of-business sales have the slight upside of driving foot traffic in stores.

E-commerce has also fundamentally reshaped when and how people shop for gifts. Cyber Monday has undoubtedly eclipsed Black Friday, but it’s more than that. Retail experts predict that Saturday, Dec. 23 will be the biggest in-person shopping day of the year, followed by Black Friday. The Saturday before Christmas—which retail observers have taken to calling “Super Saturday”—has become unusually profitable for brick-and-mortar retailers.

Besides being prime time for panic gift-buying, Super Saturday is typically so close to Christmas that shoppers can’t order a gift online and expect it to arrive by the 25th. The last-minute-shopping surge before Christmas is still a boon to retailers, but now many chains aren’t sure when to drop their prices. Traditionally, chains lower their prices in the last couple weeks of the year in order to off-load extra inventory. But if stores start selling at bargain basement prices too early, they won’t make much of a profit, defeating the whole purpose of the holiday sales.

Consumers have been reprogrammed to look for discounts and value rather than quality, argues retail consultant Kate Newlin. Midrange brands, like Ralph Lauren, are less able to compete with their off-price counterparts than they have in the past. Or they’re producing cheaper versions of popular products for places like Amazon and Jet.com in an effort to stay financially solvent as consumers look for the lowest possible price point. So those retailers will be pushing even larger discounts this season than in previous years, according to a new market report from CBRE.

“Does Black Friday turn a retailer’s financial statement black?” asked Newlin. “I think we’re very close to a tipping point where it no longer works. We’ve migrated the discussion away from quality markers and into pricing as an indicator of quality for the consumer.”

In this budget-focused environment, major discount retailers are actually growing. A recent report from J.P. Morgan found that off-price retailers have boosted their sales by $14 billion since 2011 and that TJ Maxx, Burlington Coat Factory and Ross are expecting to see incremental sales growth of $18 billion to $19 billion by 2021.

And as fewer customers flood into stores during the holiday season, more anchor retailers (think Sears, Macy’s and Kmart) are shutting their doors for good. “So the malls contract, the big-box guys move out,” Newlin explained. “At the bottom part of it, the volume part of it, you’ve got a contraction of the real estate base, and you’ve got price pressure, and you’ve got Amazon. There isn’t a compelling reason to go to the parking lot of Walmart and fight your way in. Your ego isn’t involved. At that level, the erosion is pretty profound I think.”

Pop-up shops are also going to play a big role this holiday season, CBRE predicts. Short-term retail installations give brands the opportunity to experiment with different product lines, displays and partnerships, as well as tech-savvy selling strategies that incorporate e-commerce. Although pop-ups are increasingly dominated by “clicks to bricks” retailers like Warby Parker, Everlane and Glossier, old-school brands like Kate Spade and Unilever have run pop-up storefronts in New York City over the past couple years.

Ultimately, stores have to give shoppers a reason to actually step inside. “If they’re not giving people a reason to come in—free marshmallows, buy one get one free or some hook to get people off Amazon and into the store—I think they’ll suffer,” said James Famularo, a senior director and retail broker at Eastern Consolidated.

One retailer that might end up doing well this season is Lord & Taylor, which is famous for Christmas displays at its Fifth Avenue flagship. A few weeks ago, Lord & Taylor’s parent company, Hudson’s Bay, sold the Italian Renaissance building to WeWork for $850 million.