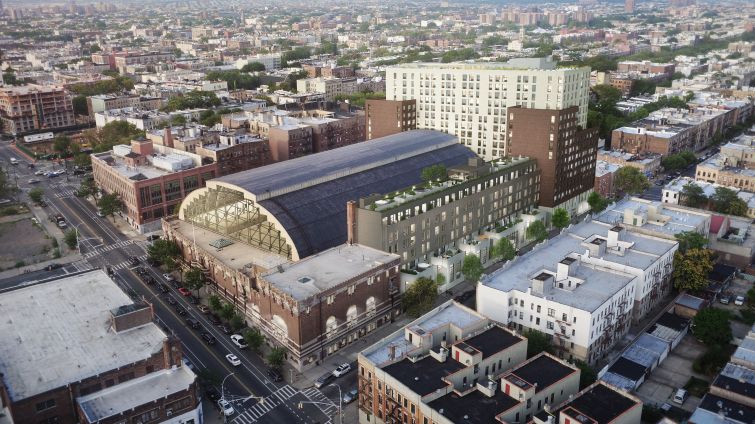 The proposed redevelopment of the Bedford Union Armory in Crown Heights will include rentals, condos and a rec center. Rendering: Marvel Architects

City Councilwoman Laurie Cumbo hammered out a deal today with the city and developer BFC Partners to redevelop the Bedford Union Armory that involved upping the amount of affordable housing and nixing condos.

The City Council’s land use committee voted to approve the proposal with relatively light opposition, passing the new rentals and rec center plan with a vote of 17 to 1, with 1 abstention. (Councilwoman Inez Barron voted no, citing the need for more affordable housing, and Councilman Jumaane Williams abstained for similar reasons.) The development’s next and final stop will be the full City Council, which is expected vote on the project at the end of month.

The original version of the armory plan called for 330 rentals, half of which would have rented for below market rates. However, only 67 of those units would have been affordable to the typical family in Crown Heights. The plan also included 60 condominiums, 12 of which were going to be reserved for low- and middle-income households. The historic building was also slated for a large recreational center and low-cost office space for local nonprofits organizations.

“This deal has more affordability than crown heights has seen in decades,” Cumbo said before the vote. “We will look back on today as a remarkable turning point in the history of this neighborhood. I grew up in a community where we didn’t have a swimming pool, we didn’t have a recreational facility, we didn’t have basketball courts.”

“We are proud to help transform the Bedford Union Armory from a vacant building into a vibrant community space that will provide a state-of-the-art recreation center, affordable offices and deeply affordable housing for Crown Heights,” BFC principal Don Capoccia said in a prepared statement. “The significant revisions to this plan were informed by our comprehensive community engagement effort, including discussions with Council Member Cumbo and other local stakeholders. Council Member Cumbo has secured a huge win for this community and her stalwart advocacy has been a driving force throughout this process.”

The city’s Department of Housing Preservation and Development and the New York City Housing Development Corporation agreed to contribute $50 million in funding for the affordable housing part of the project, according to a spokesman for the New York City Economic Development Corporation. The city had refused to pony up subsidy for the housing until now, which proved to be a divisive choice. Councilwoman Cumbo has said in the past that she wouldn’t support the project unless more of the housing was priced for people in Crown Heights.

“Today’s vote marked a major victory for the Crown Heights community,” EDC President James Patchett said in a statement. “By more than doubling the number of homes that will be affordable to families with lower incomes, the de Blasio Administration is ensuring that this project is both transformative and equitable.”

Before the land use committee vote, the council’s planning subcommittee approved the project this morning. The subcommittee meeting attracted several protesters from neighborhood activist groups, including New York Communities for Change and the Crown Heights Tenant Union. When the protesters began heckling Cumbo during the hearing, Councilman Rafael Salamanca ordered the sergeant-at-arms to remove them. After Bertha Lewis, who heads the Black Institute, a think tank and activist organization, hassled Cumbo from the audience, the councilwoman shot back, “This deal is far better than Atlantic Yards, which you supported and benefited from.”

Lewis was the leader of ACORN from 2008 to 2010. The group aggressively supported Forest City Ratner’s project at the time, after the group signed a deal to help manage and lease up the affordable housing portion of the development and reportedly received financial help from the developer.