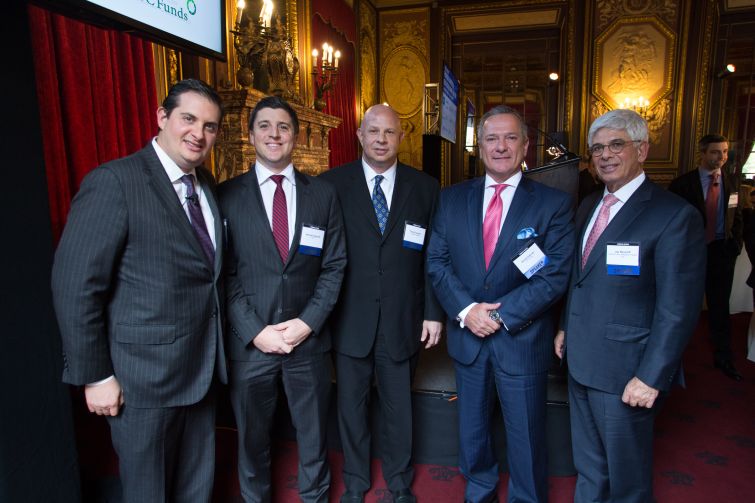 What’s the alternative? Well, when it comes to lenders there are more than a few to choose from at the moment, and some of the industry’s best and brightest took to the stage during the Alternative State of Mind: A look at the state of the alternative lending market panel at Commercial Observer’s Financing Commercial Real Estate Forum yesterday.

Tony Fineman, a managing director at ACORE Capital, posed the juxtaposition of hard money lending being mainly used when there is a dearth of capital for a project, while in the alternative lending world, “there’s a ton of capital chasing deals at the moment.”

There’s no doubt that alternative shops are transacting where traditional lenders can’t, but the two don’t necessarily need to compete, said Peter Sotoloff, the chief investment officer of Mack Real Estate Credit Strategies. In fact, Mack has partnered on several deals with traditional lenders who are seeking a low loan-to-value but still have capital to deploy. “It’s a symbiotic partnership that’s working really well,” Sotoloff said.

Fineman agreed, saying that although non-bank lenders are more flexible than their traditional counterparts, in terms of how they operate and how they assess risk, “All of us use the bank markets to some extent.”

When the panelists discussed the advantages of being an alternative lender, Palmier said that being unregulated is a great thing, partly because—without the shackles of credit committee approvals—the firm’s swift closing time of roughly 35 days brings back repeat business.

Michael Gigliotti, a senior managing director at HFF agreed that speed of execution is a big selling point in borrowers’ consideration of alternative lenders. “Speed brings borrowers to these guys, Gigliotti said. And he should know; the volume of alternative lender-executed transactions that HFF has negotiated over the past year has increased 300 percent. Bank lending is also up, “but not as competitive,” he noted.

Perhaps one of the biggest voids that alternative lenders have filled is that of construction lending, and for good reason, Palmier said. “Banks take longer, offer less leverage and there’s a lot more recourse.” Palmier has seen a significant hike in demand for ground-up construction financing recently, he said. “We’re flexible and get more yield in return for that flexibility,” he said, adding that he has even made some loans at 100 percent loan-to-cost.

Construction loans comprise roughly 30 percent of Mack’s lending book. Sotoloff said that one feather in Mack’s cap is that the firm has 30 people in its development group and so it has unique insight—including understanding a sponsor’s costs in a transaction.

When the conversation swung around to EB-5, Gigliotti said he’d seen a significant decrease in transactions with an EB-5 financing component in 2017 compared with 2016.

Referencing a financial instrument that surely haunts the dreams of many of those who survived the global financial crisis, Sotoloff said he sees EB-5 as the CDO-squared of this cycle.

“Down the road [EB-5’s] day of reckoning is coming.” Sotoloff said. “It is mis-priced capital, and the jury’s out on the buyers of it and the abuses around it.”

Fineman said the real issue is that, “We haven’t seen a round-trip yet in terms of [EB-5] problems.”

But until then, failed EB-5 executions are helping UC Funds in term of its deal pipeline, said Palmier.

When it came to 2018 forecasts, the panelists sadly had no crystal ball for interest rates. “They can’t get much cheaper,” Fineman offered. Gigliotti pays interest rates no mind, however: “We see liquidity as the most impactful thing for our business,” he said.

Before you settle in for a cushy 2018 however, Sotoloff cautioned that he believes the market is due for a correction, and said that he’d welcome a market shock. “Prices are exceptionally low for the risk people are taking,” he said.