Need for Speed: MTA’s Waking Nightmare Could Be Fixed if the Agency Focused on Tempo 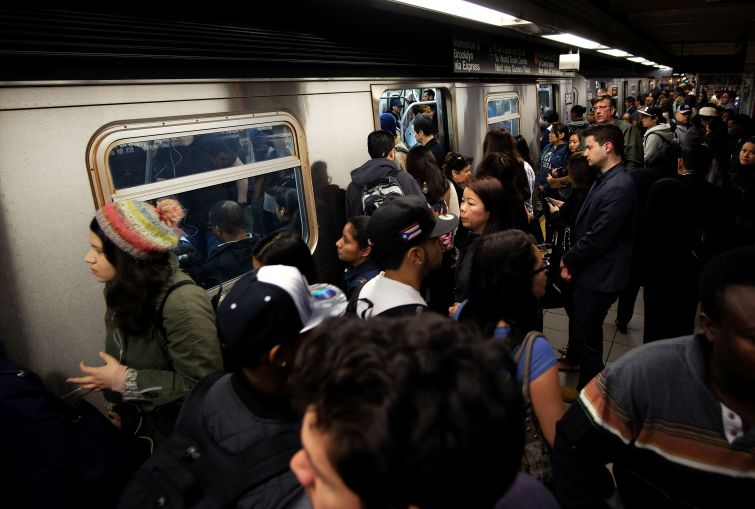 Maybe the reason the Metropolitan Transportation Authority has been so late in handing in recommendations about how to deal with poor service is because they’ve been stuck in their own tunnels.

For months, the MTA has been dithering and avoiding publicly addressing its “summer of hell,” and now, another public agency has beat the MTA to the punch and identified the extent of the problem—though, with a few major oversights.

A report last week by the city’s Independent Budget Office (IBO) found that the number of subway delays has tripled since 2012 and that the annual cost to the city in commuters’ lost time was $307 million. It attributed most of the delays to overcrowding.

The report falls short in diagnosing the extent of the MTA’s problems. For one thing, its estimate of the cost of subway slowdowns is far too low. An internal New York City Transit report from last year, made available to Commercial Observer, says that the average delay per passenger trip is three minutes. This may not seem like a lot, but, according to 2015 data by the National Transit Database, the average subway trip is only 21 minutes, making the three-minute delay about 14 percent of total travel time. Based on this information from the leaked document, the total cost of delays on the subway, not just at rush hour—the IBO’s report looks only at rush-hour delays—is $3 billion per year.

Another miss—and a major one—in the report is blaming overcrowding for most of the delays. An operations planner within NYCT, the agency within the MTA that runs the subways and most buses, who spoke to Commercial Observer on condition of anonymity, explained that internal rules require the agency to log a cause for every delay, and when the cause is unknown, the agency enters “crowding.”

If the problem, then, is not overcrowding, what is it? In one word: speed.

Average train speed has decreased in the last few years, while the scheduled trip times have not changed. CO’s source in operations planning said the schedules did not change because management was afraid of embarrassing itself: Slower official schedules would invite more scrutiny from the MTA board.

Why are trains running slower than they used to? NYCT began deemphasizing speed as a goal. The New York Daily News reported that as soon as Ronnie Hakim (who became head of the MTA earlier this year) became the head of NYCT in 2015, she expressed concern over a poster that read “Safety, Service, Speed and Smiles,” asking “Why is speed on there?”

The worst of the causes for the recent slowdowns came from a decision regarding punctuality. Traditionally, American transit operators, ranging from Amtrak’s multiday trains to local bus agencies, have measured timekeeping by whether the train or bus arrived at the end station on time with a small fudge factor (the MTA adds five minutes). This is known as on-time performance.

Recently, NYCT switched to prioritizing a measure called wait assessment. The MTA’s public data explains that wait assessment measures whether trains or buses arrive at each station at the scheduled intervals. As previously reported by this writer for Vox, wait assessment led dispatchers to hold trains ahead of each delayed train. For example, if one A train were delayed by 10 minutes, they would hold several A trains ahead of it to smooth out the delay for passengers who have not yet boarded. Instead of making some passengers wait 10 more minutes for their A train, they would make many more passengers wait two minutes.

The result was a disaster. Trains became slower, delays propagated between lines, and on-time performance fell from 85.4 percent in 2011 to 63.2 percent this year. An A train delayed by two minutes might enter a shared section of track too close to the D train, delaying either train another two or three minutes; the D might then be delayed entering a section shared with the B, creating cascading delays. Until last summer, senior management swept the problem under the rug, forbidding junior planners from using the word “delays.”

Shams Tarek, a spokesman for the MTA, told CO that the agency is not indifferent to the speed of its service, but is rather prioritizing safety as “absolutely essential.” He added that wait assessment is not the MTA’s main metric for evaluating punctuality, but rather one measure supplemented by other metrics.

Accuardi explained that London and Singapore already use excess journey time as their primary punctuality measure on trains and on buses that run every 12 minutes or less.

“Our general approach to the MTA is to be cautiously optimistic,” Accuardi said. His optimism was rewarded at the end of last month, when the MTA announced that it would begin using excess journey time as a punctuality metric for the subway (but not for buses).

More careful data analysis is required, Accuardi added, tracking each delay backward in time to see what caused it. This is especially important because of the highly branched nature of the subway. For example, a major delay on the Q may turn out to have started on the C, leading to a chain reaction of trains waiting for another train to clear a shared track segment. But doing this analysis requires a culture of accountability for delays within the MTA, and its top management has created the exact opposite culture, to the frustration of both of CO’s inside sources.

Accuardi also added that computing excess journey time requires access to data about where passengers get on and off the train. Analysts within NYCT can estimate this, using MetroCard data. If they notice that a passenger swipes a MetroCard at one station in the morning and then at another station in the afternoon, they can assume the passenger travels between those two stations. With this information, planners can know which delays affect the most passengers and take necessary precautions to avoid them.

But not everyone is satisfied with the adoption of excess journey time as a metric. Adam Rahbee was a planner and manager at multiple transit agencies for many years, including NYCT, Transport for London and the Chicago Transit Authority. He oversaw changes on the London Underground that improved punctuality. And he had harsh words about excess journey time, or any other single reliability metric. Rahbee argued to CO that the managers who try to influence the metric have no power, and instead other departments make decisions about operations planning and scheduling without any interdepartmental coordination. Schedulers blame train operators for driving more slowly than the timetable tells them to, while train operators blame the schedulers for writing unrealistic timetables. As a result, in London, excess journey time has not improved in the almost 20 years it has been the preferred reliability metric.

Accuardi emphasized the importance of accountability in measuring punctuality. Someone needs to be responsible for making sure trains run on time, and it can’t be individual train operators. NYCT’s line manager program makes individual line managers accountable, but it is difficult to assign blame for problems given that most lines share tracks with multiple other lines.

The MTA already has all the tools it needs to improve train trip times and reduce delays, and many employees are aware of the issues they are facing; Accuardi learned of the excess journey time from low-level planners within NYCT. The problem is political and institutional dysfunction. Planners who figure out ways to improve service cannot share them with their bosses for fear of inviting political backlash; while some midlevel planners long pushed for excess journey time as the focus and for more attention to speed, it took last summer’s bad press and the recommendations of TransitCenter for management to adopt the new metric. It still remains to be seen if NYCT follows through on TransitCenter’s recommendations for more accountability and better analysis of which delays affect the most passengers—in other words, if it’s using the full power of excess journey time, or if it just wants to be seen as doing something.