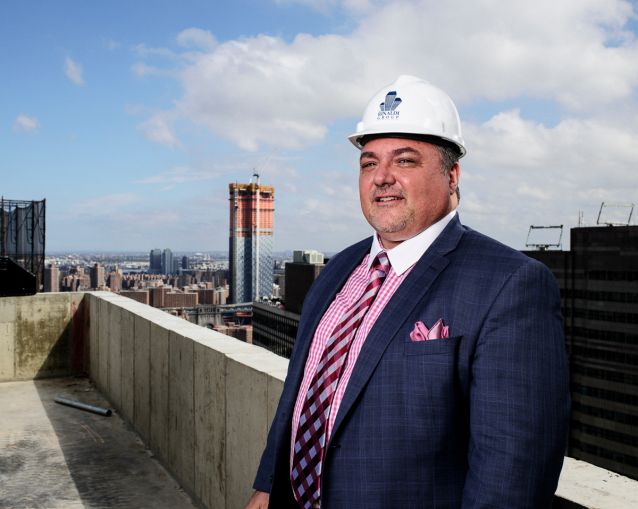 On a bitterly cold day in January, contractor Anthony Rinaldi helped organize a 500-strong rally against a City Council bill that mandated apprenticeship programs for construction workers on buildings of 10 stories or taller.

Anticipating a fight, he had hired eight armed guards to help protect the nonunion hardhats who were protesting next to City Hall. Across the street, hundreds of union construction workers were demonstrating in favor of the bill, known as Intro 1447.

“The next thing I know, the union was around the block, and they literally left their site, brought all their people and really came nose to nose with us,” he said, “and were trying to antagonize us into a riot.”

He had also given a heads up to the New York City Police Department, which dispatched a few dozen officers to quell the crowd. “It got so crazy that there were over 50 cops on the street,” he explained. “It got that dicey.”

The moment was a symbolic one for Rinaldi, who recently became chair of New York City leadership committee for the Associated Builders and Contractors, an open-shop construction trade association. It was one of his first major political fights with the group, but it certainly won’t be his last.

Even with fierce opposition from open-shop groups, the City Council passed the apprenticeship bill last month, and Mayor Bill Blasio signed it into law this week. The latest version requires construction workers to have 40 hours of safety training by September 2020.

Rinaldi’s 14-year-old construction management business, the Rinaldi Group, is open shop (meaning he can employ both union and nonunion workers) because more than 70 percent of the building permits issued in the private sector go to nonunion projects, he said. That tracks with data from the Real Estate Board of New York, which found that among residential projects with 100 or more units, only 14 percent were union sites, according to an analysis of New York City Department of Buildings permits conducted in 2015. Another open-shop group, New York Construction Alliance, told Commercial Observer in June that its seven member companies employ 75 to 80 percent nonunion workers.

It’s a little ironic that the 52-year-old Elizabeth, N.J. native spent months pushing back against the unions, after he cut his teeth working at big union construction companies in the 1980s and 1990s.

After he graduated with a mechanical engineering degree from Lehigh University—where he played Division 1 baseball—he landed his first job at HRH Construction, a subsidiary of Starrett Corporation. Starrett has built a host of well-known New York City projects, including the Empire State Building, Stuyvesant Town and Trump Tower. Rinaldi also spent several years as the chief operations officer of Crain Construction Company in Jersey City, N.J., and did a stint in the early 2000s at George A. Fuller Company, a 130-year-old, Valhalla, N.Y.-based building contractor.

Despite his rising star in the open-shop, or merit shop, world, “we have the ability to go union as well,” he explained. “I come from union backgrounds. My father-in-law was a Local 79 laborer. My father was a cop. If there was a project where the developer wanted to do the job union, under a project labor agreement we could do the project union. But when you’re union, you can’t go the other way.”

Besides his foray into industry politics, Rinaldi is working on several interesting construction projects. On Bowery between Spring and Delancey Streets, his firm is building the tallest modular hotel in the world for Dutch hotel developer Citizen M.

To build the 20-story, 300-room hotel, Polish modular manufacturer Polcom shipped 220 pre-assembled pods, complete with fixtures, plumbing and electricity, across the Atlantic Ocean. Now Rinaldi’s workers are stacking them on top of a concrete foundation, connecting the plumbing and electrical to the building’s mechanical systems, and fitting the facade pieces together.

Developers tend to assume that modular construction is cheaper, but the hard construction costs are typically the same, “dollar for dollar,” he noted. “Where it does get cheaper is in the timing.” While workers excavate and lay the foundation—a process that usually takes four to eight months—the modular units are being manufactured.

“So you’re actually able to make the rest of the building somewhere else and not having to wait for linear progression of the construction after you come out of the ground,” he said. “Those units are now there and you can stack them. It will take anywhere from four to six months off your schedule.”

Developers get to pay off their construction and property loans faster than they would be able to with a conventional construction project, and their building begins producing income sooner. There are also fewer months of disruptive construction for the neighborhood.

A little further uptown, Rinaldi is helping Empire Management redevelop a landmarked bank at 250 Fifth Avenue at the corner of West 28th Street. The bank is being expanded from eight to nine stories and converted to retail and office space. Then a 23-story, high-end Thompson Hotel will sprout behind it on West 28th Street.

He also recently topped out a 38-story hotel developed by the Lam Group at 215 Pearl Street in the Financial District. And over the past year and a half, Rinaldi Group has wrapped up construction on two major hotels, a 30-story, 150-key Hyatt House at 101 West 28th Street and the 31-story, 641-key Riu Hotel at 301 West 46th Street in Times Square.

Outside of the tristate area, he’s working on the redevelopment of the historic Collins Park Hotel in Miami Beach for Chetrit Group. Before that, his firm finished a 36-bed retirement home in Lake Worth, Fla.

The one black mark on Rinaldi’s long career as a construction manager happened at the Riu Hotel site two years ago. On May 5, 2015, a worker named Christian Ginesi and a colleague were installing elevator doorframes when the temporary hoist Ginesi was working on stalled between the 24th and 25th floors, the New York Daily News reported. The other construction worker was able to successfully jump to the 24th floor below. But Ginesi unclipped his harness, which was supposed to be attached to a steel beam or to a cable system at the top of the shaft but wasn’t, and then tried to jump down, Rinaldi said. The 25-year-old Jersey City resident ultimately slipped and fell down the shaft, dropping 26 stories to the basement. He was rushed to Bellevue Hospital, where he died an hour later.

Union officials slammed Rinaldi and the elevator subcontractor that employed Ginesi, G-Tech, for not offering the proper training.

“The young man had just got back from [serving five years with the Air Force in] Afghanistan, and he had no training whatsoever,” said Gary LaBarbera, the head of the Building and Construction Trades Council of Greater New York. “They take advantage of unskilled workers, and that’s the kind of company Rinaldi Group is.”

Six months later, the DOB suspended Rinaldi’s contractor license, halting work on all 17 of his sites across the city. He claimed it happened without any prior notice.

A spokesman for the DOB stated that the agency “suspended Rinaldi’s license because he had 55 serious safety lapses at eight sites over two years.”

Rinaldi argues that the city’s decision to pull his license was politically motivated. “The unions and self-interested bodies took advantage of it to try and smear me every which way they could,” he recounted. “I was being classified in the papers as a troubled contractor. The truth was that I had an impeccable safety record up until that time.”

A month later, the city’s Environmental Control Board, an administrative court that hears building violations, reversed the suspension and ruled that Ginesi’s death had occurred because of human error (unclipping his harness).

In spite of the scandal, Rinaldi is generally well liked in the construction industry.

Marshall Adams, a lawyer who represents Rinaldi in Florida and a close friend, called him a “warm, engaging, funny guy” and “the most brutally honest client I have.” The pair met six or seven years ago when Rinaldi brought him a case involving a subcontractor.

“I analyzed his case and said the subcontractor did all these bad things, but you’re going to have to make good on them,” Adams explained. “And he said, ‘I brought this guy to the table, I have to make good on all the things he did.’ It makes it easy to represent a client when they listen to you and are willing to do the right thing, [when] they’re not just trying to find a way out.”

Rinaldi has a wife, Joan, of 28 years, and three kids, 15-year-old Julia, 19-year-old Frankie and 22-year-old Anthony. The family often visits Adams and his children in South Florida over the holidays. “My kids love him, and they love his wife,” Adams said. “And we try to make it a point to see each other when I’m in New York.”

Danny Khazai, a stone importer who heads NYC Worldwide Marble, echoed those sentiments. He met Rinaldi in 2003 when they were both working on a Ritz Carlton in White Plains, N.Y. In a city full of shady contractors, Khazai described him as honest and reliable.

“He’s one of the only people who makes sure that the job gets done on time, and that all of the subcontractors get paid on every job,” Khazai said. “In our industry, what happens is, 90 percent of general contractors, they end up not paying you. That’s how this industry is.”

But Rinaldi still holds his subcontractors to high standards and pushes them to finish work on time. “When it comes down to business and his projects, you have to get done on time,” Khazai said. “If you’re behind, he’s hard on you.”

In many ways, it’s clear that Rinaldi was shaped by his father, who served on Hoboken’s police force for 33 years (and in classic Italian fashion, was also named Anthony Rinaldi). He retired in 1982 as the highest-ranking captain in the small city’s police department. Two years later, during Rinaldi’s freshman year at college, he died of colon cancer.

One of the contractor’s early memories involves his mother, who panicked after not being able to reach his father and drove into the middle of a race riot in Hoboken in 1970.

“They were still having some of the residual riots going on that were coming from Newark and Jersey City,” he remembered. “My mother was worried, couldn’t get him, so she puts me in the car—I had to be 4 or 5—and drives right into one of the riots. I saw my dad in riot gear, the helmet with the shield. And they were shooting at [the cops] from the rooftops. This was Hoboken. It was like crazy. My father actually saw my mother drive by. And my father went nuts; he was crazed. That’s how rough Hoboken got.”

Later that year, their family decamped to Secaucus, N.J., where Rinaldi has lived ever since.