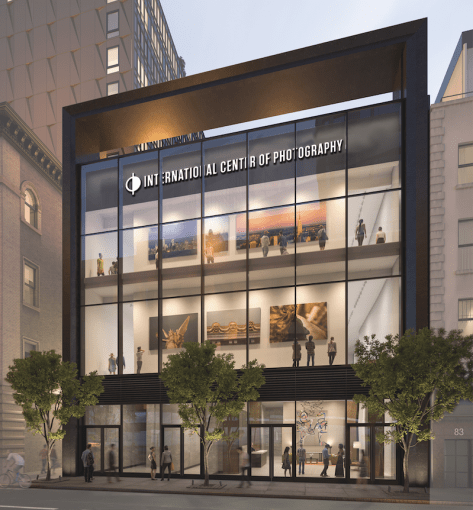 The International Center of Photography is moving to Essex Crossing on the Lower East Side.

The 43-year-old institution signed a contract to purchase two commercial units—one retail and one community facility—at the base of the residential condominium at 242 Broome Street, according to public records. The center plans to consolidate its museum and school into 40,000 square feet of space in the SHoP-designed building, per a press release from the tenant.

If the museum seals the deal, it will occupy 20,000 square feet in a separate, four-story structure linked to the residential building via a long, vertical flight of stairs, and another 20,000 square feet on two floors in the base of the main building. A spokesman for the developers declined to comment on the purchase price.

The Andy Warhol Museum was originally going to occupy that space, but it backed out of the project in 2015, as Observer reported at the time.

International Center of Photography currently has an 11,000-square-foot museum in a retail space at 250 Bowery, across the street from the New Museum. It purchased the space for $23.5 million in 2015, CO reported at the time. The institution plans to sell the Bowery location in order to pay for its new space, ICP executive director Mark Lubell told The New York Times.

“ICP is that rare institution in today’s cultural landscape—we exhibit, we collect and we educate. Thanks to the vision and support of our board, the synergy between these different elements of our mission and our identity will be strengthened by this move,” Lubell said in a statement. “Our Essex venue will continue to reinforce our ties with the vibrant Lower East Side arts community.”

The 14-story 242 Broome Street will hold 55 residential condo units, 11 of which will be affordable. Bowling alley Splitsville Luxury Lanes is taking 17,000 square feet in the building, but tenants haven’t been announced for the remainder of the property’s 40,000 square feet of retail. The developers are Delancey Street Associates, a partnership between Taconic Investment Partners, L+M Development Partners, BFC Partners and Goldman Sachs.

The building is under construction at the corner of Ludlow Street and is expected to be complete in the first quarter of 2018, according to listings from Douglas Elliman, which is handling the residential sales. Units are currently up for grabs with asking prices ranging from $1.27 million for a one-bedroom to $6.25 million for a three-bedroom, three-bath unit.

Update: This story was edited to include the precise square footage, details about the space and comments from the tenant.