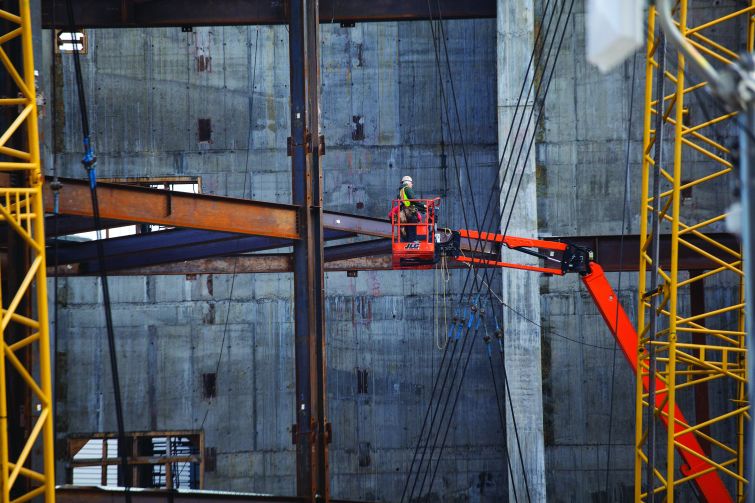 A construction worker works from a lift at City Point in Brooklyn. Photo: Michael Nagle

Trade groups that represent both open-shop and union contractors are vocally opposing a package of City Council bills that aim to increase fines and create new ones for serious building code violations. The council passed two of the bills yesterday, but the most controversial of the proposals is still wending its way through the legislative process.

“The level of fines they’re talking about are arbitrary and capricious,” Louis Coletti, the head of the Building Trades Employers’ Association, a contractor group that represents companies using open-shop and unionized labor, told Commercial Observer. He added that the bills will be “ineffective” because there was “no discussion with the experts in the buildings department or the experts in the industry.”

The bills were first introduced among a package of 21 construction safety bills at a hearing in January. But since the focus of that hearing was the controversial “apprenticeship bill” signed into law on Monday, trade groups didn’t have much opportunity to comment on the New York City Department of Buildings fine proposals at the time. The council only notified contractor groups on Oct. 2 that the bills were scheduled for a vote, giving them two weeks to offer feedback and objections before the full council voted on the bills.

One of the proposals passed Tuesday, Int. 1404-A, would raise the minimum civil penalty for a “major violation” of the site safety plan portion of the building code to $1,000 and the lowest amount for an “immediately hazardous violation” to $2,000 from $1,000. Contractors with major violations can get slapped with a $250 fine for each month that the violation isn’t fixed. And those with immediately hazardous violations can fined $1,000 per day for each day the violation isn’t corrected.

Another bill voted through yesterday, Int. 1437, creates the concept of a “violation ratio,” a term that the DOB refuses to comment on and that doesn’t exist in the current building code. The legislation defines the phrase as the number of major or immediately hazardous violations that have been issued at a site in the last six months (excluding violations going through an appeals process), divided by the square footage of the site’s footprint. It also opens the door for the DOB to develop its own ratio to determine projects that have ongoing, unsafe conditions.

If a site exceeds the “violation ratio,” the DOB can issue contractors with double the fines for each infraction. Essentially, council members want to punish contractors who are racking up what the bill terms “excessive violations.”

These are just so blatantly a cash grab to bring in money,” said Diane Cahill, a lobbyist who works with the city on behalf of an open-shop group, the Associated Builders and Contractors. “They’re looking to bring in money to support the training initiatives created by 1447 [a newly passed law that requires new safety training for construction workers].”

Notably, residential developments would be exempt if they were financed with subsidies or loans from the New York City Department of Housing Preservation and Development or the city’s Housing Development Corporation.

When CO contacted the DOB for comment on the bills, a spokesman only responded that the agency was “reviewing the legislation.”

During a January council hearing, the Real Estate Board of New York testified that it “generally supported” the bills that introduced higher fines, because “increased civil penalties are [an] effective means to discourage bad behavior.” But the group argued the ratio bill was unnecessary because existing regulations and policies already allowed the DOB to shut down troubled sites.

Others worried that major, high-rise projects are more likely to be affected by the new violation ratio policy. Building inspectors typically monitor these sites more closely than small projects, meaning that smaller projects may ultimately avoid both the extra violations and safety monitoring.

“The projects that are more visible are going to get more attention and potentially greater impact in this regard,” said Joe Hogan, a vice president for the Associated General Contractors for New York State. “A lot of the problems that need fixing—on projects that are less than 10 stories—we’re not getting where we need to by just administering these fines.”

He also noted that the nebulous categories of immediately hazardous and major fines introduce “a lot of subjectivity and issues of potential abuse” into the code enforcement process.

However, the piece of legislation that sparked the most controversy hasn’t been voted on yet. The bill known as Int. 1419 would levy fines ranging from $500,000 to $1.5 million for a violation that happens when a worker is seriously injured or dies on a construction site.

Some industry experts worried that the potential fines for construction fatalities would boost the cost of liability insurance, and by extension, the overall cost of construction in New York City.

“This kind of fine—some of that is going to come back to the insurance companies as well,” said Brian Sampson, the head of the Empire State Chapter of the Associated Builders and Contractors. “If you’re a bank, you’re going to make sure you’re getting your loan repaid. If you know there’s going to be all these fines, are you going to loan less? At a higher rate?”

In a legislative memo issued last week, REBNY expressed concern that the bill keeps contractors liable for worker fatalities and injuries, even if a court rules that the accident was caused by a worker’s mistake.

“REBNY reiterates its concern that the bill does not include any relief provision if said injury or death is the result of a worker’s negligence,” the organization noted. “Without such a relief provision, the bill would impose a de facto strict liability standard upon the owner and permit holder that could be used against them in other related litigation.”