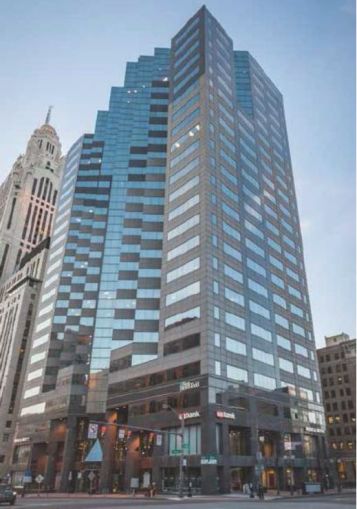 Hearn and CrossHarbor Capital Partners, co-owners of One Columbus Center in Columbus, Ohio, have secured a $30 million loan from Citizens Bank to finance future upgrades to the building, according to an announcement from the lender.

The partnership of Chicago-based Hearn and Boston-headquartered CrossHarbor purchased the property in March, and has already begun enhancing the building’s common spaces and fitness center.

The 25-story, 407,472 square-foot office tower stands at 10 West Broad Street near the banks of the Scioto River, on a block that overlooks both the Ohio Statehouse and the Columbus City Hall. Ground-floor retail space currently houses a U.S. Bank branch, and aerial walkways connect the skyscraper to the neighboring Hotel Leveque. (The hotel’s ownership recently sued Hearn for the right to prevent One Columbus staff from using the aerial walkways at night.)

The loan marks the second collaboration between Citizens and the Hearn-CrossHarbor partnership, who previously came together to finance a project in Indianapolis in 2015.

A news article cited on Hearn’s website shows that the partnership acquired the property for $31 million in March, although the official purchase price has not been disclosed.