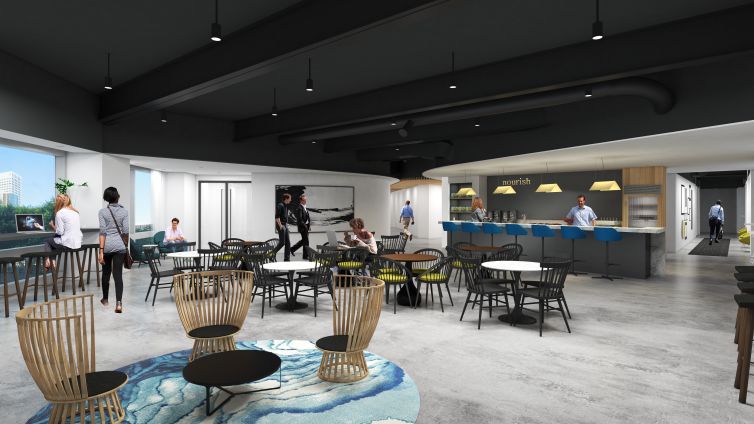 Brookfield Property Partners is partnering with meeting space provider Convene to create a flexible-term workspace and an on-demand meeting and event space within its core Downtown Los Angeles office properties. The move marks Convene’s entrance into the West Coast market and aims to capitalize on the growing demand for dynamic workspaces with high-end amenities that foster a collaborative environment between tenants.

It’s an approach that coworking provider WeWork has used to startling success with small firms and entrepreneurial customers, and one in which the Brookfield-Convene partnership aims to implement with large, corporate office clients in its 8.6-million-square-foot office holdings in the urban hub.

According to an official joint statement, the partnership will include Convene’s introduction of its workplace-as-service model at two of Brookfield’s properties in Downtown L.A., an approach that Convene co-Founder and Chief Executive Officer Ryan Simonetti has likened in published reports to helping landlords run their office buildings like a full-service lifestyle hotel.

The relationship between the two companies isn’t a complete surprise, as the landlord has been an investor in Convene since 2016, when it anchored the $20 million in Series B financing for the meeting space provider and again in its Series C fundraising campaign in 2017, which netted Convene $68 million in additional financing. (A spokeswoman for Brookfield said further details on the financial and structural arrangement between the two companies was proprietary.)

“Brookfield’s ‘place making’ approach focuses on creating vibrant destinations that help the world’s leading companies attract, retain and motivate top talent and maximize productivity,” said Bert Dezzutti, the western division executive vice president at Brookfield. “Our partnership with Convene will facilitate the successful rollout of the company’s unique hospitality services within our Downtown Los Angeles office portfolio, greatly enhancing the flexibility and sense of community we offer to our tenants, and ultimately pioneering the future of interconnected office communities.”

As part of the arrangement, Convene will design and manage flexible-term workspace and on-demand meeting and event spaces in a campus of Brookfield’s properties downtown in L.A., beginning with the Wells Fargo North Tower in the Wells Fargo Center at 333 South Grand Avenue, home to leading companies such as Wells Fargo, Gibson Dunn & Crutcher, Oaktree Capital, Latham & Watkins and Doubleline Capital.

The upgrade at 333 South Grand is expected to be completed by early next year, according to the Brookfield spokeswoman. Brookfield plans to expand Convene’s services to several of its other office buildings in Downtown Los Angeles, including 20,000 square feet at another office to be disclosed later this fall, and eventually to other major urban markets in California and other cities where Brookfield operates.

In addition, Convene will provide locally sourced food and beverage services, meeting planning and production support, and curated in-building programming for tenants, as well as a proprietary mobile app to connect Brookfield tenants to Convene’s services.

“The workplace of the future is about choice, flexibility, and experience,” Simonetti said in a prepared statement. “By partnering with Brookfield, we can bring a best-in-class tenant experience powered by hospitality, technology, and amenities to Brookfield’s campus of commercial office properties in this growing market.”