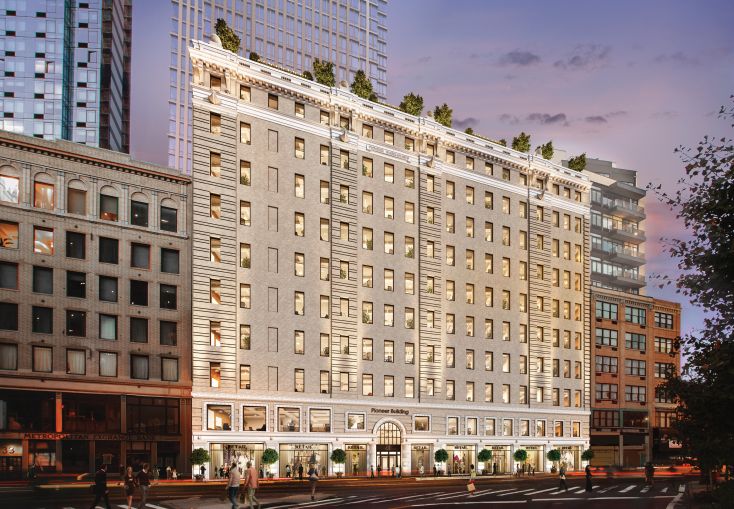 The company, a third-generation store that sells a wide variety of art supplies, will occupy a 1,400-square-foot part of the ground floor and 6,300 square feet on the lower level of the building between Livingston Street and Lafayette Avenue, according to information provided by CPEX Real Estate. The asking rent for the ground-floor section was $125 per square foot, and the deal is for 10 years.

Blick currently operates more than 65 retail stores in 25 states around the country. The company has six locations in the Big Apple, including one soon-to-be opened outpost in Harlem at 261 West 125th Street between Frederick Douglass and Adam Clayton Powell Jr. Boulevards. The new store in Downtown Brooklyn will be the second in Brooklyn. The first Kings County location is at 536 Myrtle Avenue between Grand Avenue and Steuben Street in the Clinton Hill section of the borough.

In addition to Blick, there were three smaller-sized retail transactions at the building, which recently underwent a $30 million gut renovation, with designs by Beyer Blinder Belle, as CO previously reported. Each of the tenants are expected to move in by the end of the year. Their asking rents were $125 per square foot and the leases are all for 10 years.

Smoothie King, which makes fruit and vegetable drinks for more than 800 locations around the globe, will take part of the ground floor in a 1,200-square-foot transaction for 10 years. This will be its third location in New York City. Nick Masson of Schuckman Realty handled the deal for Smoothie King.

Coffee Project New York, a coffee shop, completed a 10-year, 1,000-square-foot lease on the ground floor for its first location in Brooklyn. Alexander Karas of Winick represented the tenant.

“We are happy with this mix and caliber of tenants for the Pioneer Building,” Tyler Wilkins, a partner at Quinlan Development Group, said in a statement. “This lineup will provide a good set of amenities to the office residents upstairs and the neighborhood.”

There is still 12,000 square feet of retail space available at the building, which is being marketed exclusively by CPEX. The brokerage is targeting gourmet markets, cafés, fitness centers, restaurants and gastro pubs. Asking rent for the remaining available space ranges from $80 per square foot to $140 per square foot.

“The secured tenants form a solid foundation for the overall activity at the base of the Pioneer Building,” Danut said in a prepared statement.

Digital media and podcast production company Gimlet Media signed a nearly 27,000-square-foot lease at the building to be the first office tenant, as CO reported in June.