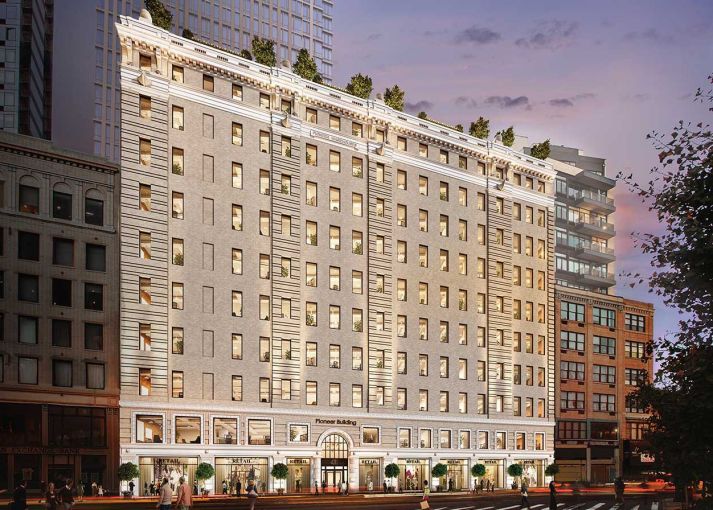 Digital media and podcast production company Gimlet Media has agreed to take nearly 27,000 square feet of office space at the Pioneer Building at 41 Flatbush Avenue in Downtown Brooklyn—becoming the first tenant to sign on at Quinlan Development Group and Building and Land Technology’s redevelopment of the former storage building.

Gimlet signed a 10-year lease for 26,964 square feet comprising the entire seventh floor at the 10-story, 270,000-square-foot building between Fulton Street and Lafayette Avenue, according to a press release from Quinlan and BLT announcing the deal. The media company will relocate from its current offices at Samson Management’s 92 3rd Street in Gowanus.

Asking rents at the Pioneer Building range from the low $50s to low $60s per square foot, according to sources with knowledge of the transaction. A Cushman & Wakefield team of Bruce Mosler, Joseph Cirone, Patrick Dugan and Ron Lo Russo represented the landlord, while Robert Tunis and Eric Ferriello of Colliers International represented the tenant.

Quinlan and BLT acquired 41 Flatbush Avenue for $90 million in 2015 and are currently finishing up a $30 million renovation of the property, helmed by architecture firm Beyer Blinder Belle. Upgrades include a new lobby, new windows, new elevators and a tenant-controlled HVAC system, as well as amenities such as a landscaped rooftop terrace and a bicycle storage facility.

Those features are meant to appeal to creative, technology and media companies like Gimlet, which BLT Managing Director Craig Deitelzweig described in the release as “the type of tenant we are seeking at the Pioneer Building.”

Quinlan Managing Principal Tim Quinlan said the deal “confirms the appeal of the Downtown Brooklyn [office] market” to tenants attracted to “the convenience of nearby, multiple transportation options as well as the many amenities in the neighborhood.”

A Colliers spokeswoman said the brokers declined to comment. The release noted that Gimlet is relocating “to accommodate its expansion and the desire to have greater access to a large pool of creative talent who live and want to work in Brooklyn.”