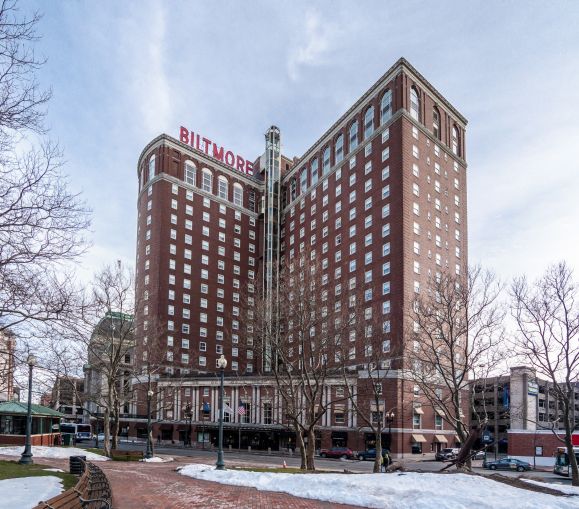 The five-year, floating-rate mortgage loan was brokered by JLL. Representatives from JLL were not immediately available for comment.

After construction, during which the hotel will remain open, AJ Capital will rebrand the property as part of its Graduate Hotels chain, christening the building the Graduate Providence. The Graduate brand runs chic lodgings in college towns across the country. Existing offshoots include hotels in Madison, Wis., Berkeley, Calif. and Charlottesville, Va.

Built in 1922, the 18-story Biltmore is the 10th-tallest building in Providence. The hotel has 294 guestrooms and over 18,000 square feet of meeting space. Its address at 11 Dorrance Street places the Biltmore a few blocks from the Rhode Island Convention Center and the Dunkin’ Donuts Center, a concert arena.

Along College Street, pedestrian bridges allow guests to walk across the Providence River to Brown University and the Rhode Island School of Design.

Stuart Silberberg, an ACORE managing director, said that a variety of the venerable building’s attributes attracted his firm to the deal.

“The Biltmore is right downtown—so it’s walkable to a bunch of things—it’s iconic, and it’s tall, so there are good views,” Silberberg explained. “The building is older, but it has a fair amount of charm. The idea for the Graduate [rebranding] is to bring out that charm.”

The property will join a nearby Marriott as the second Providence-area hotel that ACORE has financed. Silberberg, who grew up in Boston, said that hotel lending is a good fit for ACORE’s strategy of medium-term, floating-rate lending.

“Every five to seven years…[hotels] generally need an overhaul and refresh,” Silberberg said. “You’re refacing the hotel in a much more consistent way than you would an office building.” With hotels, he said, “you have to spend real money.”

AJ Capital did not respond to requests for comment.