Yield of Dreams: Foreign Investors Have an Increasing Appetite for Sub Debt 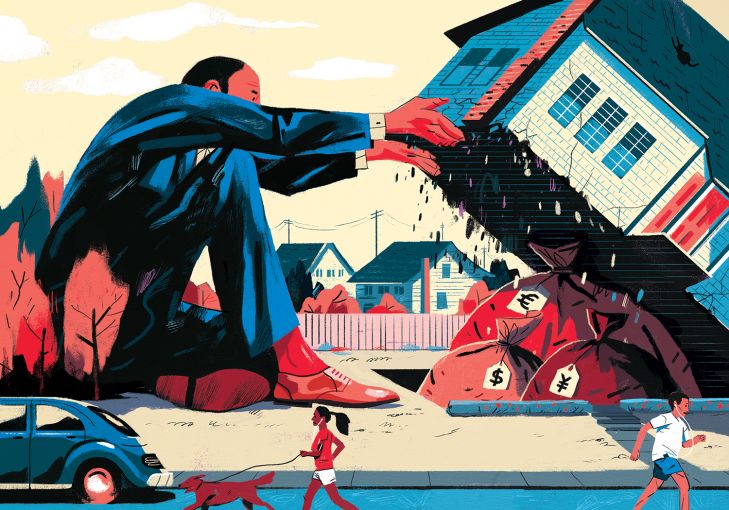 Having dipped their toes in the U.S. subordinated debt pool for several years, international investors are now jumping in headfirst.

A bevy of factors, including low yields on senior debt and more conservative bank lending, have created a booming business in U.S. real estate for mezzanine and other forms of subordinated debt. And, foreign money has become key in this rapid growth with investors in Asia and the Middle East, in particular, showing strong appetites.

“Rates are so low, people in the investment business are screaming for yield,” said John Levy, the president of Richmond, Virginia-based real estate investment banking firm John B Levy & Company. “You can get first mortgage money at below 4 percent. For investors who need 5 or 6 or 7 percent, they have to start looking at what are their alternatives. And sub debt, mezzanine debt and preferred equity are alternatives.”

Among foreign investors, “South Koreans are particularly active,” said Jeffrey Fastov, a senior managing director at Square Mile Capital. This demand has been driven significantly, he said, by the country’s pension funds and insurance companies, which have “very long-term liabilities” and need “long-term assets to match.”

Adding fuel to the fire, “interest rates in their home country are zero or even negative,” Fastov added, “and so they’re searching for real returns.”

U.S. subordinated debt offers these investors something of a sweet spot in terms of risk profile, Fastov said, noting that they were particularly interested in “stabilized, higher-quality properties in major markets with good sponsors.”

“They don’t want to take on a lot of risk because these insurance companies are just trying to cover the cost of their long-term liabilities,” he said. “So this is a way of getting 100 to 150 basis points premium without taking a lot of perceived incremental risk.”

With that risk and targeted return, “it’s essentially the Koreans or maybe money managers or some life insurance companies in the U.S.,” Fastov said. “That’s basically where we find the capital.”

As Commercial Observer reported in May, South Korean investors loaned $45 million in mezz debt toward the refinancing of Edward Minskoff’s 1166 Sixth Avenue. Last year, a group of Korean insurance firms made a $220 million mezz loan on the AXA Equitable Center at 787 Seventh Avenue, and the Korea Teachers Pension fund participated in a $100 million mezz loan on San Francisco’s Westin St. Francis hotel.

Foreign demand for U.S. subordinated debt began to take off in 2015 and, since then, “has been steadily increasing,” said Jonathan Chassin, the head of the Moinian Group’s lending platform Moinian Capital Partners. He described the move into sub debt as part of a progression from senior loans.

“All foreign investors we are dealing with tend to start with whole loans and then get comfortable enough to take mezzanine positions on high quality assets,” he said.

In the case of South Korea, initial forays into the U.S. sub debt market have helped foster the country’s current appetite, Fastov said.

“Like in a lot of places, it’s a tight-knit culture, and all the players in that market kind of know each other,” he said. “And as some of the most innovative thought leaders started to take exposure to this kind of investment, others have followed suit.”

Another factor driving this trend has been the loosening, in recent years, of regulations governing investments in foreign real estate and other assets by Korean insurance companies and pension funds.

Fastov said the uptick in Korean sub debt activity has sparked interest with investors in neighboring Japan, though Japanese lenders are still small players in U.S. sub debt compared to their Korean counterparts.

“I think they’re making a very measured, cautious re-entry into the market [after the 2008 crisis],” Fastov said.

Chinese investors have also shown some interest in U.S. sub debt, though not “a huge amount,” said Jerome Sanzo, an executive director and the head of real estate finance at Industrial and Commercial Bank of China. According to a report from CoStar, the ICBC Asia was among the investors in the final capital round for the Och-Ziff Real Estate Credit Fund, which launched in 2015 and has raised $735 million to invest in mezzanine debt on various distressed properties.

Controls on outbound investment recently imposed by the Chinese government, Sanzo added, could actually lead to a slight increase in demand for U.S. sub debt. (See story on page 32.)

“There are legitimate ways that some Chinese entities can invest here despite those restrictions,” Sanzo said. “Specifically, if they already have cash-generating assets outside of China, they can redeploy those, and some of them are redeploying those into sub debt, I think, because it is getting harder and harder for them to find equity investments that make sense.”

Though, Sanzo said he doubted this would affect the market much. “I don’t think you’re going to see that tilt the needle in any significant way,” he said, “but on the margins.”

In general, the market for U.S. real estate sub debt has grown dramatically since the housing crisis, Levy said, as banks pulled back on construction lending, forcing developers to either invest more equity in their projects or look elsewhere for loans that will let them achieve the leverage they are after.

More stringent criteria around mortgage securitization has also worked to grow the sub debt space, Fastov said. “That market was just very, very aggressive [prior to the financial crisis], and it has gotten more conservative as well.”

“In commercial real estate, 65 percent [loan-to-value] is the new 75 percent,” Levy said. “People want financing but first mortgages aren’t aggressive enough. And that brings up the question of how do you get the leverage. And that just makes a bigger space to play for second mortgages—mezz debt or sub debt or preferred equity.”

“This has been a market that has been very difficult for investors to understand, to underwrite, to track because there has been no data,” Levy said. “If you were doing mezz debt or sub debt and you said, ‘I got 5 percent or 5.5 percent,’ well, that’s okay, but compared to what? Is the general index for that 7 percent? In which case, you didn’t do very well at all.”

The initial index comprises some $8.5 billion across roughly 250 sub debt positions, he said, adding that he expected improved ability to benchmark sub debt would help grow the space further.

Rising demand for U.S. sub debt among both international and domestic investors has pushed yields down significantly since 2010 and more modestly in recent months, Levy said. “They have certainly come down over the long term. Are they lower in the last six months? Yeah, probably somewhat.”

Moinian’s Chassin suggested that the increased demand for sub debt has driven rates down most significantly for safer, more conservative investments while putting less pressure on higher risk deals.

“I think it’s driving the pricing much tighter for deals that are relatively stable and somewhat [tighter] for more marginal credit deals,” he said. “There are still strong deals to be had for lenders that are able to understand the operational nuances of assets or developments.”

Middle Eastern investors have typically favored this latter sort of higher risk, higher yield deal, Fastov said, noting that this is tied in part to the region’s oil wealth.

“Some of the bigger investors there are tied to sovereign wealth pools that are obviously sensitive to the price of oil,” Fastov said. In recent years, low oil prices have been key in driving these funds’ portfolio management decisions, he added.

“So that might entail looking for shorter duration or more liquid position as opposed to very, very long-term development-type projects,” he said. “So as a general matter we’re finding interest in higher yielding, shorter term [deals] given those conditions there. They may play in equity, preferred equity and mezzanine, but it tends to be much higher yielding, much higher value-add type of projects, that kind of stuff.”

That said, Fastov noted that, like the Koreans, these investors are typically targeting class A properties in major markets.

The United Arab Emirates has been among the more active Middle East countries in U.S. sub debt, he said, and Saudi Arabia could become a bigger player in this area as the country expands its sovereign wealth fund and works to transition away from its high dependence on oil revenues.

Despite the rising foreign demand for U.S. subordinated debt and the downward pressure on yields, Fastov said he believes investors have remained prudent thus far.

“I would measure that by, Are projects that are truly crazy, that really don’t have a chance of performing, getting financed?” he said. “And I don’t think so. I think the market has good tone to it.”