The Plan: For Blackstone Innovations, Comfort Breeds Creativity at 601 Lex 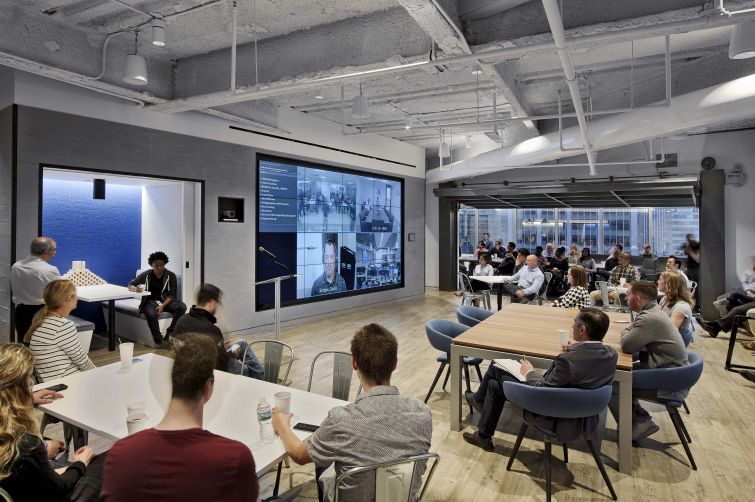 When the Blackstone Group was preparing to relocate its Innovations & Infrastructure team to a new 37,000-square-foot space on the 22nd floor of 601 Lexington Avenue in Midtown, it knew that the technology division would require a different kind of work environment than typically used by the private equity giant.

That would mean an office that would have the Innovations team’s New York-based staff of roughly 150 tech developers and designers “in the right frame of mind,” according to Bill Murphy, Blackstone’s chief technology officer and head of the Innovations division, who took Commercial Observer on a walkthrough of the space in July. “I think comfort breeds creativity.”

So Murphy surveyed his staff to find out how he could make their surroundings more comfortable (they already have a laxer dress code than their fellow Blackstoners). What he discovered was a desire for an aesthetically pleasing, multifunctional environment—and that’s exactly what Blackstone, with the help of architects M Moser Associates, delivered at 601 Lex.

The office, which the Innovations team moved into in March after a 10-month buildout process, is anchored by a large common area featuring a kitchen area as well as tables and booths for meetings and work sessions. A large wall equipped with video monitors enables Murphy and his team to hold conferences with satellite offices around the world, while an adjoining conference room is separated from the common area by an impressive, garage-style door that opens into the main space—enabling Blackstone employees to reconfigure the room as they see fit, whether it’s using the conference room for a private meeting or opening it up into the common area for an all-hands session.

“Bill had a vision of creating a space that was unique and not the standard Blackstone criteria, as far as building out spaces,” Charlton Hutton, a senior associate at M Moser and one of the lead designers of the space, told CO. While Blackstone wanted a space that would work to its advantage in recruiting and retaining talent, “they didn’t want to look like a startup—they are a very sophisticated and mature company,” Hutton said. He described the office’s design, which couples hardwood floors and wood-paneled walls with a refined, corporate feel, as a “hybrid approach between a tech firm and a financial firm.”

Murphy noted that while open office layouts are all the rage these days, his employees wanted more intimate surroundings where they could focus on the task at hand. So while the Innovations team mostly occupies workstations that can be converted between seated and standing desks, conference rooms (named after history’s great innovators—George Washington Carver, Alexander Bell and Archimedes) are scattered throughout for a private setting.

In one of the coolest quirks of the space, some of those rooms feature treadmills enabling workers to stretch ther legs while they work (Murphy likes to hop on the treadmills—which have a max speed of 4 miles per hour—while reading through reports). And, in yet another testament to the space’s prioritization of employee wellbeing, most of the office’s conference rooms and private offices occupy the middle of the floorplan—meaning the bullpen areas, housing most of the Innovations team’s desks, occupy the edges of the floorplan and get to enjoy the natural light that floods in through the office’s large windows.

“It speaks to this wellness concept in design,” Hutton said of the space’s configuration and features. “There’s a lot of talk about being sustainable in building, but let’s also focus on people—your staff’s physical and mental wellbeing. That treadmill may be where you get your best ideas.”