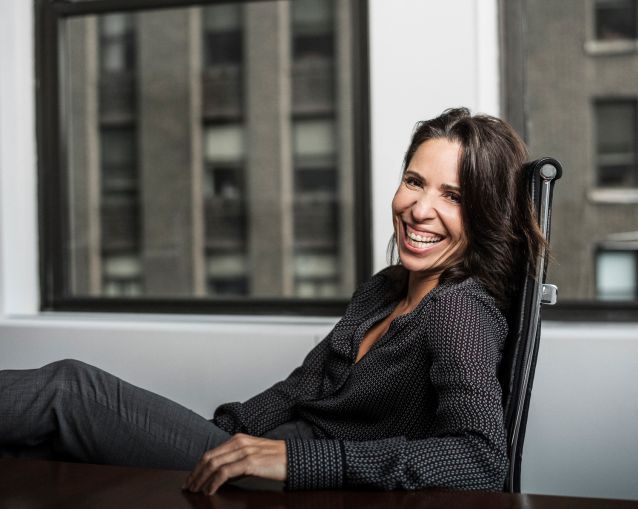 Just how comfy does Esther Bukai feel in her Brooklyn office?

Well, now that she has her ergonomic standing desk, she wants to add an under-the-desk elliptical machine. That’s necessary for her home away from home—the new Downtown Brooklyn offices of Ripco Real Estate, the brokerage’s first in the outer boroughs.

Last week, Commercial Observer met with Bukai at the new 5,700-square-foot digs on Court Street to get her take on retail in the borough. While the 20-plus-year veteran salesperson, born and bred in Brooklyn, has closed plenty of deals in Kings County (she estimated about 30 percent of her business is in the borough), as a tenant representative she negotiates leases all over the city.

At any one time, Bukai tends to focus on about two tenants. Today those are TJX Companies, the parent company of T.J. Maxx and Marshalls, and Dollar Tree. She represented Marshalls in a 22,000-square-foot lease in Kingswood Center II in the Midwood section of Brooklyn in February. A couple of months later, Bukai worked on behalf of Dollar Tree in a 9,995-square-foot deal at the Gateway Elton Street development in East New York, Brooklyn.

CO’s conversation with the retail pro—a Park Slope resident and single mother of a 10-year-old (she declined to provide her own age)—ran the gamut from how CPEX Real Estate’s Timothy King taught her everything she knows about the business to why she prefers tenant representation over landlord assignments to the advantages of being a woman in the business (you can get away with dropping F-bombs!).

Esther Bukai: I graduated from Brooklyn College. I had a boyfriend that was a jobber [a wholesaler of special deals sold directly to retailers], and I went into business with him. We would buy closeouts, where you’d buy the overstock or the returns from Bloomingdale’s or Macy’s, and we would sell them to retailers throughout the five boroughs, but on these hardcore Brooklyn streets, like Flatbush Avenue, Pitkin Avenue, Third Avenue in the Bronx, the Hub [in Melrose, The Bronx], Manhattan’s 14th Street Union Square before Union Square was gentrified. Anyway, after we split up, we split up the business, and I decided to try real estate. I worked for an apartment rental company, [the now defunct] Century 21 Klahr. They were right here on State and Court [Streets]. That was probably in 1994.

So you were just doing apartment rentals?

Yes, but I really didn’t like it. I didn’t want to work with people that were concerned with the size of the kitchens and bathrooms. That was like not my thing.

I lived in Brooklyn, and when I would drive down Flatbush Avenue, I would see Tim King’s signs up from Fillmore Real Estate all over the place and said, “That’s what I want to do; I want to do commercial real estate.” I knew all the retail markets from my jobber experience. I knew all the neighborhoods.

Did you start working with Tim right away?

Tim used to call me the hunter-killer. [King later explained to CO, “Esther had an uncanny ability and tenacity to uncover locations that weren’t on the market.”]

He was my mentor. He taught me everything.

How’d you get Rite Aid as a client?

A broker that had kind of a loose exclusive with them called up Tim King. He said that Rite Aid was looking to come into the boroughs, and what do we have in Brooklyn? Rite Aid wanted to roll out stores. Me and Tim did it together. So I started off working for Tim, but then we became partners. We wound up doing 35 [or] 40 Rite Aid deals.

Did you have any other tenants at Fillmore?

There was a company called Golden Krust [the Caribbean bakery and grill]. I opened their first [New York] store in Flatbush Junction. I did at least 30 deals with them. [Also], I was the exclusive broker for Taco Bell—there weren’t tons of them; maybe we did 10. I did some work for Dunkin’ Donuts.

Three Jamaican guys walked out of a Mercedes-Benz into my office and said, “We want to open a bakery.” So I opened [their]first store, and then we did a bunch of stores together. They have 120, maybe more now, and they’re all over the country.

Tim moved on to another company. I stuck around for a bit, but then Peter Ripka [co-founder of Ripco] was representing GameStop. Ripco was a Long Island company, but they were looking for some stores in the boroughs [for GameStop]. And he contacted us to see if we had anything, and I did a site tour with him. He offered me a job then. He was looking to open up a Manhattan office, and he wanted me to come to that office.

He was getting the CVS account, and he wanted someone with the drugstore experience, so that was kind of a carrot—dangling a carrot—because I wanted to do CVS. Rite Aid was pretty much done, and so right then and there, I just [joined them].

As a woman and especially early on, how did you make your way?

I never felt like being a woman made things harder for me. I felt like it was almost easier.

Because I could call up a landlord—a male landlord—and say, “What are you doing? Stop effing around. You know, you’re going to lose this deal.” I think a guy to another guy couldn’t do that. I like to describe myself as a charming pain in the butt. I am a pain. I’m relentless. I’m tenacious, but hopefully not in an obnoxious way.

Do you only do tenant work?

Yeah. I’ve worked with many landlords, but I prefer tenant work. I think I’m better at it.

Some people only like landlord work because they say they will definitely get paid at the end. They know the tenant at the last minute can back out [but they can find someone else]. For me, I know what a tenant is looking for. I find it for them, I put their deals together and that’s it. [Landlord reps] have to cast this huge net out. You’ve got to give follow-up reports constantly. I don’t like putting together those reports. I don’t mind doing it for retailers honestly—doing comps and stuff like that, [but] I don’t want a landlord calling me up every day, saying, “What do you have for me, what do you have for me?”

And retailers don’t do that?

I feel like it’s more of a sales job as a landlord rep. And I don’t see myself as a salesperson. I see myself as more of a . . . Matchmaker is such a ridiculous word—but I know where tenants should be.

Have you ever wanted to move into management at Ripco?

That’s not anything I’m interested in doing. I have a 10-year-old son. I take a lot of vacations. I’m a scuba diver. I travel a lot with him. I pick him up every day. So that’s really important to me.

You said you moved out of your parents’ house when you were 17. Why?

My father was tough. I’m half Syrian. My father’s Syrian, but I didn’t meet the Syrians until I got into real estate, which is kind of hilarious. My mother died when I was 19. She was really sick. I would go there every day and basically have to take care of her.

Were you an only child?

My sister was in Israel at the time, and I had my two younger brothers.

With a boyfriend. I don’t know that I want to put that in.

I’m considered totally unconventional anyway. There’s no doubt that everybody thinks I’m nuts in this business—not nuts, but I deal with a lot of Syrians that are pretty conservative, and they probably view me as being a little unconventional, for sure.

Where did you grow up?

I went to [the now defunct] South Shore High School. It’s in the ghetto. It’s in Canarsie.

Is that where you lived?

I grew up in an area called Georgetown, near the Georgetown Shopping Center.

What was your first job?

When I was like 14, I got a job in a shoe store for like three weeks. That was so not for me. I preferred waitressing. At least [you get] tips. There’s no ceiling on the amount of money you can make. And that’s why I like real estate—because you determine how much you make. I have an entrepreneurial spirit. And I own real estate. That’s another thing—I did a lot of investing. I shouldn’t say a lot, but I own some decent properties.

My first piece is in Tribeca at 140 Church Street. We bought it in 1997 with a Rite Aid lease. We had FAR [floor area ratio] and four other floors, and we bought it not even thinking we would develop it because Tribeca at the time was not a cool neighborhood. It was kind of industrial. A couple of years later, like two or three, Tribeca started getting cool. And so we partnered up with residential developers [Alchemy Properties], and we wound up building condos, and we sold them. We didn’t do fabulous on them [because] the neighborhood was not doing well at that point. I [still] own the retail condo [9,300 square feet at grade and 7,500 square feet on the lower level] with my partner [Matthew Scherr of Bryce Property & Development Co.].

What other real estate do you own?

I’m not going to go into my entire list, but I own a 16-family with a Rite Aid in Bay Ridge. I built condos in California with partners. I really don’t want to go into how many but probably close to 10 pieces of property. I’ve also built and sold stuff.

You plan to stay in Brooklyn?

I love it. I think Brooklyn is amazing. I just came back from a couple of weeks of vacation, and I missed it. I do a lot of traveling—I’m a hardcore scuba diver. I’ve done over 300 dives. I’ve been all over the world. Me and my son have been to the Galápagos, the Amazon, Italy, Spain. My kid said, “I’ve done 70 percent of most people’s bucket lists, and I’m 10 years old.” I’m an adventurer. That’s who I am. I’m single. I don’t want anyone to tell me what to do. That’s part of why I love being here [at Ripco]. People stay off my shit. I do what I want. But I make money, and I make the company money.

We’ve written about how drug stores are trying to adapt to the new retail environment. What do you see as the main thing they are going to do in order to survive?

They want to add more food. They want people to go there for food and for their daily needs.

Where do you buy your clothes?

I don’t mind going in there. I like it. Honestly, I do go to T.J. Maxx. I don’t get all my clothes there. I’m not lying. I might have gotten—where did I get this [she tugs at her blouse]—this is Theory. I do some sample sales.

Where are your pants from?

Bloomingdale’s. These shoes are from Barney’s. But I got them at the outlet. I hate shopping.

You buy anything at Dollar Tree?

My son cracks up because he thinks it’s like my favorite store in the world. I go into Dollar Tree. I spend $60 there. What I do is I buy like 20 boxes of frickin’ M&Ms, like the big movie theater-style [ones].

What do you do with all that candy?

Eat it at home. Sneak it into the movie theater.

Do you shop online?

No. I only buy housewares online. Unless it’s like socks—or sometimes I’ll get my kid underwear online—I traditionally do not do a lot of shopping online. I prefer to try things on.

What do you think of the retail climate now?