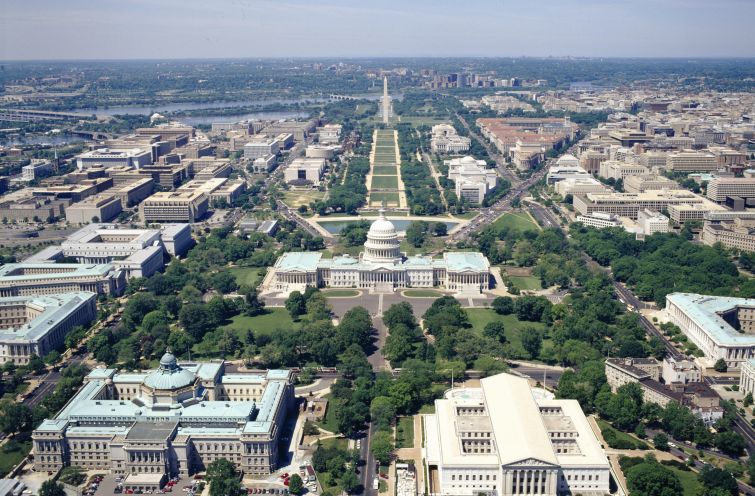 Even though Washington, D.C., has always been known as a company town—the company being the federal government—that mandatory, four-year reshuffling is beginning to matter less and less.

The region has become a balanced economy with the private sector now taking the lead, generating the bulk of 40,000 jobs a year in professional, business, hospitality and education sectors, according to a Newmark Knight Frank report. Developers have high hopes for a burgeoning tech industry. Employment is up, and incomes are high. It would seem there’s little to complain about.

But analysts, brokers and lenders in the region are starting to see unwanted side effects—specifically, too much supply. As  new properties come online in previously untapped markets, oversupply is causing lenders to scale back on construction financing.

Regulatory handcuffing, such as the Basel III requirements that restrict available bank capital, isn’t helping either.

“The market has changed dramatically,” said Sadhvi Subramanian, Capital One’s Mid-Atlantic market manager. Two years ago, she said, D.C. developers could land loans from banks in the region for up to 75 percent loan to cost, but today, this number has dipped to 55 percent and often requires a guarantee of up to 35 percent, depending on the project and sponsor. “All the deals are becoming more club deals, rather than a bank taking the lead and syndicating the deal.”

But as banks move away from lending, preferring deals for stabilized, Class B multifamily properties, debt funds have come on in a big way, filling the void on construction over the last six to 12 months. Insiders don’t see them leaving the District any time soon.

With population and job growth continuing to rise, residential development in the District is reaching historic levels. And that’s the problem.

Overall, the District absorbed 2,604 units during the second quarter of 2017, according to an NKF report. That’s “substantially more” than the 1,292 units completed during the same quarter last year.

More than half of those deliveries were in Capitol Hill where alone more than 1,720 units have come online. Developments are filling up and rental rates are high. Major projects included Grosvenor’s 325-unit F1RST Residences in Capitol Riverfront and the completion of a 383-unit project by Ruben Companies in Capitol Hill.

Over the last three years, absorption numbers show plenty of openings, coming in around three times D.C.’s historical rate, according to CBRE research. Analysts aren’t sure if that’s sustainable.

“Those kinds of deliveries haven’t been done in those submarkets before,” said Subramanian, adding that analysts are watching now-trendy U Street and keeping their eye on large multifamily projects being developed by WC Smith and others on H Street. “Can the rents be sustainable? Can the vacancies remain at that level?”

Going forward, developers are scaling back and waiting for the market to absorb the new supply glut.

“We were one of the first markets coming out of the recession to start rebuilding again,” said Chris Doerr, who manages D.C.’s multifamily sales for Walker & Dunlop. “All those deals have delivered over the last 24 months, and they’re going to continue to deliver. From a metrics standpoint, everything is strong. There’s just a lot of units that got delivered at the same time.”

That’s forcing developers to give free rent concessions to tenants. Meanwhile, banks are pulling back on construction financing.

That said, purchases of Class B stabilized properties are still being funded by banks, agencies and life companies, as they’re turning dividends for investors.

“Inside the Beltway, close to the Metro, if you’ve got something that’s maybe 25 years old, but you can put in new countertops and kitchens and appliances, maybe there’s some upside there,” Doerr said. Along with core infill, he said, value-added properties like these are the most attractive property deals in D.C.

As a slew of apartment buildings come online in emerging markets like the Capitol Riverfront, NoMa and Shaw, retail is right behind them. NoMa—north of Massachusetts Avenue NE—alone has over 200,000 square feet of retail under construction, much of it concentrated around Union Market.

That retail’s being built right into the sizable number of office and multifamily developments being completed across the city, according to David Webb, who oversees debt and structured finance in the region for CBRE. As other cities embrace vertical malls, the District’s dominant paradigm remains ground-floor retail, even as construction moves out beyond the city center.

“The city continues to push out and will continue to push out,” Webb said, adding that Hill East, an area east of Capitol Hill, should be the next neighborhood to “take off.”

New construction increased in the first quarter with 1.1 million square feet of retail underway, including 520,000 square feet slated for emerging markets like Northeast, Southeast, NoMa and the Capitol Riverfront (the area near the Navy Yard along the Anacostia River).

In D.C., as in the rest of the country, retail is perceived as a risky asset as the market feels the squeeze from Amazon and the e-commerce wave. With big box and clothing stores on the brink, construction lenders are looking closely at preleased tenants’ credit and watching them on the markets. Webb called it a “more careful approach.”

Last year, REI and Nordstrom Rack opened major new stores in NoMa and Penn Quarter, respectively. But lenders say grocery stores and restaurants are safer, more desirable tenants. This year, chef-driven concepts opened near Nationals Park and filled up the 14th Street Corridor and flocked to Shaw, a gentrified neighborhood that’s been heavily developed by JBG Smith. As prime retail spaces leases up, rents in these eastern submarkets hover around $50 per square foot, according to a CBRE report.

“Talk to any of the big retail REITs, and they’re all signing up restaurant leases,” Subramanian said. “If you’re looking at bank financing, restaurants were never considered a favored asset type. In spite of that, that’s what’s drawing all the people to the retail centers.”

Earlier this year, Vornado Realty Trust made waves when it shelved major projects before spinning off its D.C. assets into JBG Smith. Lenders say they aren’t worried about the real estate giant’s exit from the market and expect the $8 billion company to move forward with the projects after assessing its holdings.

A JBG Smith spokeswoman confirmed that the company is “very committed” to its properties across D.C., Maryland and Virginia and will move ahead with construction in Crystal City, which includes a planned 31,000-square-foot retail development.

Even as total office sales volume remains on pace to exceed last year’s levels, brokers and analysts are forecasting a tenant’s market in the District. Trophy rent rates are stagnating at $69 per square foot, according to a new JLL report.

That’s due to an oversupply of Class A product coming onto the market in the Central Business District and in the suburban areas of Dulles Corridor, Tysons Corner and Bethesda. Analysts say concessions are at peak levels as landlords are forced to offer rent abatements for up to a year and large improvement packages. Overall, vacancies are up, exceeding the historical average of 11.9 percent, according to a Cushman & Wakefield report.

When it comes to construction, it’s only preleased buildings—like Carr Properties’ 875,000 square foot Midtown Center in the CBD—getting funded by banks. Fannie Mae, the lead tenant, will vacate 1 million square feet of owned and leased space throughout the District, including its headquarters on Wisconsin Avenue, when the new office opens next year.

According to Subramanian, tenants are downsizing, leaving Class A buildings for smaller, more efficient properties. She points to law firms, a traditional demand driver in D.C., needing less space as they digitize their libraries. That may be leaving a net gap in the market.

“Even a 15-year-old Class A building may not really be set up for today’s office tenant,” she told Commercial Observer.

At the same time, sovereign money continues to flood D.C. at record-setting numbers. The recent sale of 900 16th Street NW to Norges Bank and Oxford Properties went for $1,252 per square foot and smashed the District’s previous record from 2015. Over last year, foreign investment in the region has increased by 10 percent, as total market share, according to JLL. Capital hails from investors in Singapore, Japan, Norway and Canada, among others.

“Overseas buyers want to invest in our real estate,” said Paul Collins, a broker at Cushman & Wakefield. “They like D.C. because our deal size is manageable.”

Public-private partnerships, known as P3s, are picking up steam in the region with the District and neighboring states of Virginia and Maryland looking to the private sector to finance repairs and new construction of roads and mass transit.

That includes identifying new funding for the District’s long-range transportation plan, which faces a $27.4 billion funding shortfall, according to a report by the American Society of Civil Engineers.

Meridiam, Fluor Enterprises and Star America put $138 million of private equity into the project, which is one of the largest P3 ever undertaken in the United States.

That’s just the latest infrastructure project to be partially financed through private partners. Last November, Virginia Gov. Terry McAuliffe announced that Cintra, Meridiam, Ferrovial and Allan Myers had won a $4 billion bid to finance and operate express lanes on I-66, outside the Beltway.

Their group beat out Transurban, a company that was part of the consortium that put $280 million of private equity into construction of the I-95 express lanes in Northern Virginia. That project wrapped up in December 2014.

“You’re going to see increasing focus on this, just because of the viability of the low interest rates, relatively, and the ability to leverage trust fund dollars,” said David Winstead, a real estate attorney at Ballard Spahr.

Though the construction market is dry in other sectors, Winstead said that’s not the case in infrastructure, due to guaranteed availability payments that draw from toll lanes or transit ridership. That makes recouping on a loan more certain than in the comparatively volatile retail, commercial and multifamily sectors.

Nor do insiders think lower-than-expected ridership on Metro’s Silver Line expansion will scare off potential investors. Winstead attributed the drop off to a repair program that’s on its final stage.

If anything, he said, D.C.’s infamous gridlock should drive more ridership to Metro, especially as more tech companies take root along the suburban Dulles Corridor.

Ironically, it’s areas like Dulles—outside the District, going deeper into the western suburbs—where insiders say it’s harder to get financed. Because the land’s there, they say, there won’t be the same demand they’re seeing inside the city. Ultimately, rents will be lower.

Or maybe it’s a matter of direction. The emerging submarkets, brokers say, are on the other side of town—heading east.