L.A. City Councilman is proposing a law exposing and impeding contractors doing business on the border 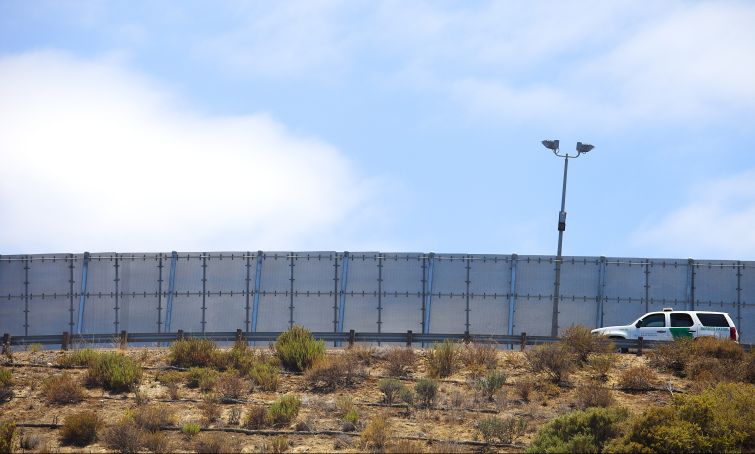 President Donald Trump’s promise of a “great, great wall on our southern border” is hitting a wall of its own in Los Angeles and the state of California. In response to the White House’s multi-billion-dollar plan to extend or, at the minimum, re-enforce the barrier, Los Angeles and state officials have proposed laws that will expose and possibly impede firms working on the project from city or state contracts.

Last month, L.A. City Councilman Gil Cedillo proposed an ordinance that would require companies seeking or doing business with the municipality to disclose whether they have contracted to help design, build or provide supplies for the proposed border wall between Mexico and the United States.

While the proposed law would not actually ban companies working on the wall from doing business with L.A., it is a first step toward stricter rules. Cedillo and other city officials are seeking advice from the city attorney on whether L.A. can ban those firms or take other steps to avoid them, such as scoring them lower when they compete for city contracts.

And lest anyone think exposure or prohibition is a legal pipe dream, the measure has the backing of L.A. Mayor Eric Garcetti who said, in a statement provided to the Commercial Observer, “Washington should be focused on building consensus for comprehensive immigration reform—not putting up a divisive wall. This construction project does not reflect our values in Los Angeles, and Angelenos have the right to know who they’re in business with on important city contracts.”

The legislation is part of a statewide trend with the California State Senate pursuing the passage of SB 30, which aims at prohibiting the state from entering or renewing a contract with a company that accepts a federal contract related to Trump’s border wall. State Senator Ricardo Lara, who crafted the legislation, plans to continue pursuing the bill during the new legislative session starting in January 2018 with amendments meant to specifically target “prime contractors” rather than small businesses, he said.

In addition to concerns over a clash with civic values, it’s demographically easy to see why local politicians would be behind such measures. According to the most recent data from the Public Policy Institute of California, the state was home to more than 10 million immigrants as of 2015, and 27 percent of its population is foreign born—about twice the U.S. percentage. Furthermore, L.A.’s foreign population largely comprises Mexican immigrants—41 percent—who have been among the groups Trump has singled out for censure.

“We are a Blue state, but regardless of politics, it goes deeper than that,” said Fredy Ceja, the communications director for Cedillo.

The restrictionist policies espoused by the White House and the wall are having a negatively profound impact on the way the city operates, according to Ceja.

“You are talking about [undocumented] individuals who are going into the shadows again, who don’t want to call their local representatives, who don’t want to report crimes, who fear being out in public because they fear they are going to be deported next. When you talk about those differences, might some jobs be affected? Maybe. It’s a delicate game. You must consider people whose jobs may get affected, but you also have to take into consideration the effects that the Trump administration’s immigration policies have had in our communities. It’s affecting the entire community, not just those families being torn apart.”

On the other side of the debate are construction-related businesses that depend on lucrative government contracts, organizations representing their interests and those of the wider L.A. business community, who find the legislation unconstitutional, discriminatory and, at a minimum, bad for business.

“Seeking to exclude construction workers and their employers because they are doing honest and fairly competed, funded federal work is a particularly bad way to score a political point,” said Brian Turmail, a spokesperson for The Associated General Contractors of America (AGC).

“While everyone is entitled to their opinion on border security measures, [constitutional] law is quite clear that city and state governments can’t take steps to undermine lawfully appropriated measures by the federal government,” he told Commercial Observer, a point echoed by other critics of the proposed ordinance.

Turmail added, “This is also a slippery slope. Once you, as a community decide that you are going to discriminate against a firm that is engaged in lawful, appropriate work, we create this hodge-podge of litmus tests. It’s a very dangerous policy to set. It’s pick and choose discrimination, instead of blatant discrimination, but it’s still wrong.”

According to Gary L. Toebben, the president and chief executive officer of the Los Angeles Chamber of Commerce, it’s also bad for city business, as the proposed laws may eliminate the best contractors—because they have border wall ties—from even offering their services.

“This is a litmus test for the selection of contractors if you want to put in an application or do work on the wall,” Toebben said. “It doesn’t seem to have, in our minds, a direct correlation between the quality of the contractor and their bid, and in the end, it shortchanges the city and citizens of Los Angeles.”

What may be gained from companies working on the wall is still a major variable. Construction estimates (like the debates over the usefulness and ethics of such a project) vary widely. Projected costs range from a low of $8 billion (Trump’s initial estimate from the campaign trail), to $21.6 billion (not including maintenance), according to an internal report by the Department of Homeland Security at the beginning of this year.

But aside from the billions at stake, it has the added benefit for contractors of developing or deepening ties at the federal level. As such, the divisive debate and proposed censures haven’t discouraged everyone from entering the ring. Hundreds of companies bid on the lucrative border project, according to the Department of Homeland Security, which is overseeing the project, with eight firms selected in August to build concrete and non-concrete prototypes.

Each contract is worth between $400,000 and $500,000. In all, the eight prototypes will cost about $3.6 million, according to Ronald Vitiello, acting deputy commissioner of U.S. Customs and Border Protection. (The money for the process came from $20 million that Congress authorized the Department of Homeland Security to pull from other places in the budget earlier this year, though Congress has yet to authorize any further money to build new portions of the wall.)

Whether the president pursues the border wall he promised on the campaign trail remains to be seen. Just last week, Trump pulled a major reversal by indicating he would support legislation protecting young immigrants known as “Dreamers,” if it were accompanied by a major border security upgrade. However, he also said such a package did not have to include funding for a border wall, thus acquiescing to a crucial Democratic demand.

This uncertainty, coupled with proposed laws that seek to bar wall contractors from current and future city and state contracts, has had a definite chilling effect, said David A. Raymond, the president and CEO of the American Council of Engineering Companies.

“I’ve been here for almost 20 years, and I haven’t seen anything like this,” Raymond said. “Some of our member firms have decided not to participate in the wall project because they fear it will prejudice their work in California. For some of them, it’s just not worth it, when you compare the uncertainty of the wall project and what the size of the project might be, we have firms that have just decided that they don’t want to jeopardize their political standing in a local jurisdiction, whether it’s California or someplace else.”

Whatever becomes of the border wall, one thing is clear—those on both sides of the debate have no plans of backing down.

Turmail, whose association counts four of the companies recently awarded prototype contracts for the border wall as members, said, “Our member firms have been involved in virtually every major construction project undertaken in the last 99 years, so it’s not a surprise that they would be included in the selection process.”

He added, “Should we get to the point where border wall funding goes forward and our member firms are engaged in that practice and they are discriminated against by any jurisdictions, we will take all appropriate actions available to us to defend our members lawful right to engage in legitimate federal construction work.”

Meanwhile, Cedillo’s office was equally emphatic about the need to defend the vulnerable segment of the immigrant community in L.A.

“We have to stand up as a city,” Ceja said. “We have a history of standing up for the undocumented community. As long as we are in office, we are going to continue to fight, especially when there is an aggressive administration in Washington, D.C., which is looking to divide our communities and instill fear.”