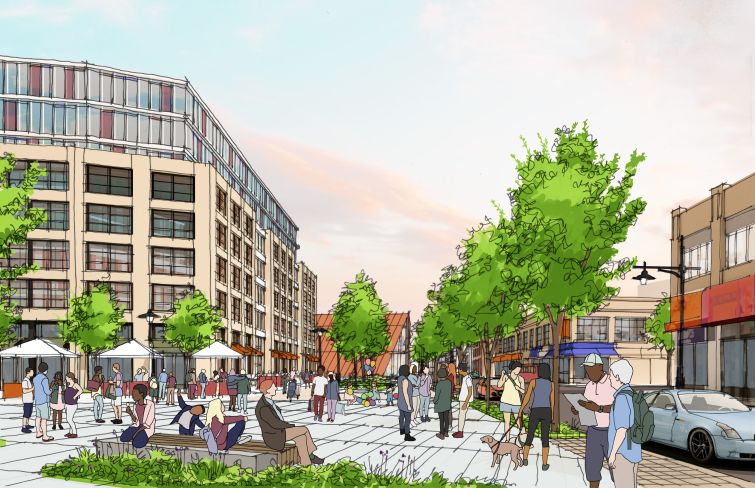 As part of the redevelopment plan, there will be new pedestrian plaza's built in Far Rockaway.

A plan to rezone a 23-block area in the Downtown Far Rockaway section of Queens for the creation of more housing and commercial development took another major step forward today, inching closer to the neighborhood’s first zoning changing in more than a half century.

The City Council’s subcommittee of zoning and franchises approved the Downtown Far Rockaway Redevelopment Project, unanimously in a 5-0 vote, clearing the way for a full land-use committee vote tomorrow morning. The full City Council is expected to take its vote on Sept. 7.

“Today, we begin the journey of building on the progress we have made over the past four years, by infusing hundreds of millions of dollars into infrastructure, quality jobs, parks, streetscape, transit improvements and both community facility and open space,” Councilmember Donovan Richards, the chair of the subcommittee and also the representative for Far Rockaway, said in a statement. “These investments will ensure that Far Rockaway benefits from the amenities that so many other communities in the city enjoy.”

The city is committing $126 million of the $288 million—the rest comes from the federal government and private organizations—for a myriad of projects and to develop Far Rockaway, including the promote local hiring and job growth, give support for minority and women-owned businesses, and encourage development of 100 percent new affordable housing on city-owned sites. In addition, the rezoning will provide the financing to private developers to encourage the construction of affordable housing, funding for the 101st Police Precinct and the modernization of local schools as well as upgrades to sewer infrastructure and real-time bus arrival displays.

The rezoning effort was backed by local Community Board 14 in March, Borough President Melinda Katz in May and the City Planning Commission in July. Mayor Bill de Blasio has the ability to veto it, if approved by the City Council, but he has voiced support for more affordable housing and development in New York City, and Far Rockaway in particular

The zoning change is a big deal because it would be the first land use approval targeted at bringing more affordable housing to the city since the East New York rezoning in April 2016, and de Blasio has made the creation and preservation of affordable housing a key goal for his administration.

“Through this plan, Downtown Far Rockaway is finally getting the investment it deserves, with new jobs and mixed-income housing, open space and community facilities,” James Patchett, the president and chief executive officer of the NYCEDC, said in prepared remarks.