The 6 Best Things About Being a Boutique Broker 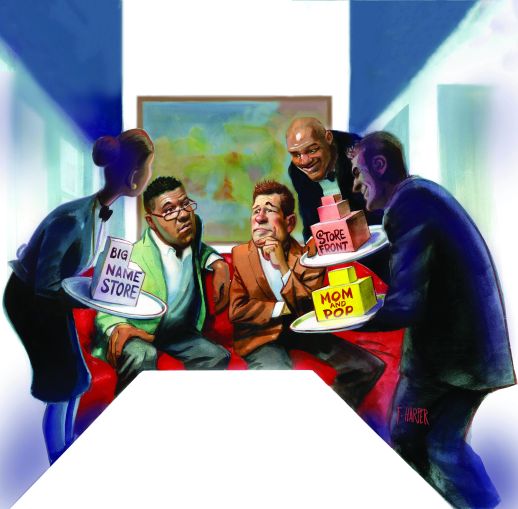 Sure, there are reasons to go to a big firm. The big guys will always be better known. They’ll always have a big advantage in nabbing the blue chip anchor tenants. And there are all sorts of surprising drawbacks to going small that you never realize until you’re there. (“If I need to go on vacation,” Retail Strategies’ Mark Finkelstein warned, there is “no one necessarily to take my place.”)

That said, if you’re willing to live without 1-million-square-foot leases and get annoying calls when you’re on the cruise ship, most of the boutique brokers with whom we spoke made a pretty convincing case as to the upside of keeping it micro. Here were the six best reasons we heard:

“Control” can mean many things. For some, it can mean control of one’s schedule. As in, one of the main reasons that Nick Dullea started Corbett & Dullea was so that he could go on auditions without having to run it past a boss.

Another meaning is that you get to be more of a master of your time; rather than “babysitting” the junior brokers at AM Realty, Allan Profeta found that he could come into his two-man office, do his work, leave and not be weighed down with the extraneous handholding of the junior staff.

You Get to Wear Many Hats

“Most brokers only do one thing,” Laurence Roberts of Arch Brokerage said. “Being a boutique shop gives you the opportunity to do different things—office, retail, real estate advisory work and development.”

With that opportunity comes pliability. “It gives me the opportunity to have flexibility on the kind of deals I work on,” Roberts added. “Whereas in the bigger shops, they’re much more structured than I am.”

The Percentages Are Better

One of the nuts that’s most difficult to crack in a big firm is quantifying how much work goes into a deal.

A broker might get a listing and just sit back and wait for someone else at the firm to bring them a tenant. On the Durst Hospitality Group team that Keith Durst assembled, the brokers get a lot more cash for their work. This can only really happen at a small place. You “can split fees in a much more meaningful way,” Durst said.

Do not underestimate the appeal of not having to suit up every morning with dress shoes and a necktie.

“Depending on the day, there’s no real dress code,” said Eli Someck, the president of Redwood Property Group. “If I’m working with a law firm, I’ll wear a suit,” but if it’s a tech firm, Someck goes in jeans and sneakers.

“When you look at the big shops, they have [many] teams,” Bloom Real Estate Group’s Scott Bloom said. “We are one team.”

And that sentiment is echoed by a lot of the other firms CO canvased.

“We have an open bullpen,” said Michael Rouzenrouch, a founding partner of Miyad Realty, “there’s a lot of open communication—it feels like one big group.”

Someck added, “I wouldn’t have someone work here that I don’t think is a good person. The people here all care about each other.”

Now, if you get really small, there isn’t an esprit de corps because there isn’t anybody to feel it. However, that has its upside, too.

“I like the idea that I’m not competing next to the guy next to me—even though I’m a friendly competitor of every broker in the city,” said Mark Finkelstein, the lone broker and owner of Retail Strategies. “But the guy next to me isn’t looking over my shoulder trying to glean information or steal deals or listings or anything else.”