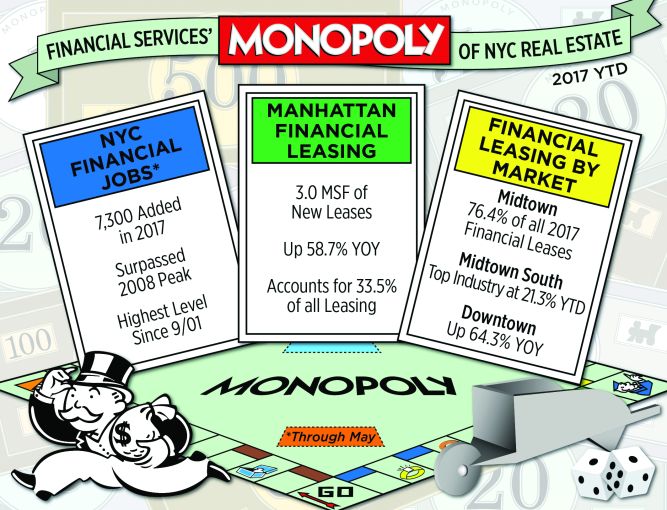 Earlier this year, the makers of Monopoly ousted my favorite token from the game, the wheelbarrow, along with the thimble and the boot. I know…mind-boggling, especially since they replaced it with a T-rex, rubber duck and a penguin. In any event, although the board game is tied directly to real estate, as a kid it always made me think of banking and money, which made me think of how the financial services sector in New York City has been growing this year.

The financial industry went on a hiring spree through May and, in turn, has taken back the top leasing spot. The financial sector added jobs in four of the first five months of 2017, for a total of 7,300 jobs created. May was the only month this sector posted a loss, but it was only a dip of 1,000 jobs after 3,000 were created in April. With 471,300 financial services jobs throughout New York City, this level exceeds the previous peak from January 2008 and marks the highest level since September 2001.

The growth in this sector has already translated into an increase in leasing activity for financial firms. Through midyear, the financial sector completed over 3 million square feet of new leases of 10,000 square feet and greater in Manhattan, which is up 58.7 percent from one year ago. Compared to all of the other industries that leased space this year, the financial sector accounts for 33.5 percent of all new leases. This is up significantly from the 24 percent averaged by this industry from 2014 to 2016.

The financial sector has not shied away from renewals this year either, as an additional 2.5 million square feet was renewed this year.

Midtown continues to be the most desired location for financial firms, as 76.4 percent of the activity occurred in this market. Of the 2.3 million square feet leased by this sector in Midtown, 40.3 percent occurred in future developments as financial firms continue to make forward commitments to space on the Far West Side. In Midtown South, the financial sector has the highest market share of new leases through the first six months of the year at 21.3 percent. This handed TAMI (technology, advertising, media and information services) a “go directly to jail” card, as TAMI leasing has stalled and is down from 2016 when it was the top-ranked industry and accounted for more than 50 percent of the square footage in Midtown South. There has also been an increase in Downtown activity, as the financial industry accounted for 19 percent of the square footage leased, up slightly from the 17.8 percent market share from one year ago.