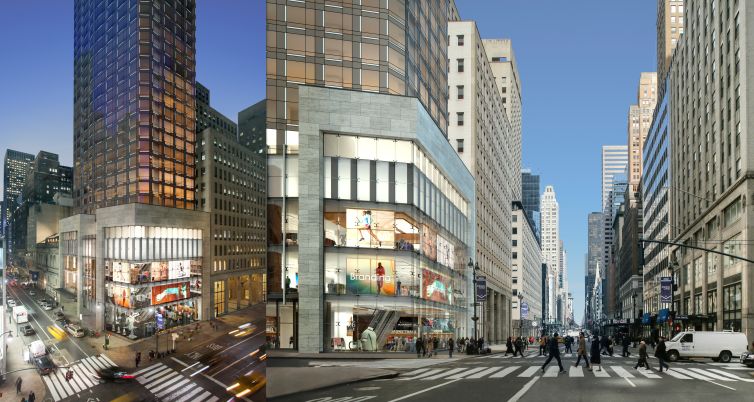 A rendering of the planned project at 520 Fifth Avenue. Photo: Ceruzzi Group

The first mortgage will replace a $130 million land loan from J.P. Morgan Chase and provide pre-development costs for the forthcoming glassy tower, which will include a combination of residential condominiums, hotel and retail uses, a representative for the developers confirmed.

The 18-month loan has a one-year extension option, according to the source. The financing will provide some flexibility while the sponsors decide on a final development plan.

Ceruzzi and SMI bought the site, at 43rd Street, from Thor Equities in 2015 for $275 million. The new owners reportedly intended to follow through on Thor principal Joseph Sitt‘s plans to build a 71-story glass-façade tower with a combination of condo and hotel units with retail at the building’s base, and filed condo documents with the New York State Office of the Attorney General.

The project was slow to rise, however. Permits were pulled at some point, according to pro-development website Yimby. Revised plans surfaced late last year, Yimby said, and those called for 145 condo units and a 208-key hotel, atop three floors of retail. It’s unclear if those plans are still in play, but the developers said the new loan would help speed up the development process.

“This refinancing has positioned us to conclude our design process and move forward with construction,” SMI USA President Tom Tao said in a statement provided to CO via email. “Mack presented us with exceptional terms and an extremely attractive rate … and we closed the deal less than a month from when we agreed to terms.” His partner agreed. “This transaction was remarkably executed … allowing us to refinance this excellent asset and move along the process on an expedited timeline,” said Lou Ceruzzi, president and CEO of the eponymous firm.

When pre-development is complete, the developers will seek construction funds for the tower, according to the source close to the deal; he projected the total construction costs would exceed $500 million.

“This transaction demonstrates that for very high quality sponsorship, the capital markets are open,” Peter Sotoloff, managing partner and chief investment officer with Mack Real Estate, told CO. He confirmed his firm’s role as lender but declined to comment on the specifics of the loan.

Update: This story has been updated to include comment from the developers and the brokers on the transaction.