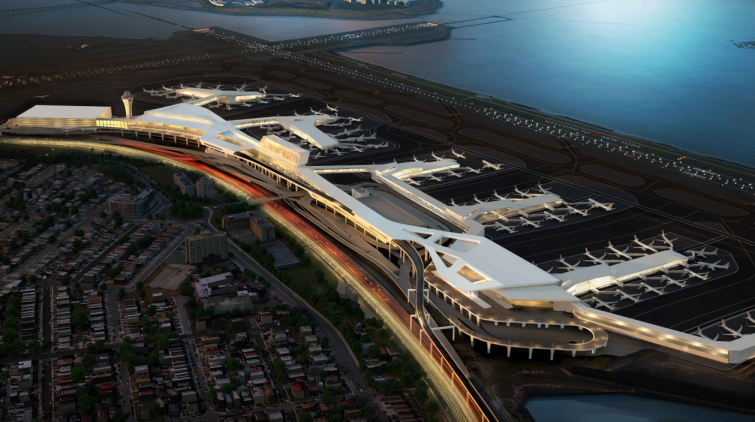 As the Port Authority of New York & New Jersey board voted today to renew Delta Air Lines’ ground lease at LaGuardia Airport, it announced that a Goldman Sachs-managed fund had pulled financing from the construction of the airline’s new terminal at LGA.

In January, the Port Authority approved a new ground lease through 2050 at LaGuardia. At the same time, the agency said that Delta and the Goldman Sachs-managed West Street Infrastructure Partners III would invest $300 million in equity investments and $3.6 billion in debt to cover the airline’s portion of the $4 billion terminal project.

With the Port Authority’s blessing, Delta will move forward without an equity partner on constructing a new complex to replace the aging Terminals C and D at LaGuardia, Port Authority board members said during this afternoon’s board meeting. It will fund $3.4 billion in design and construction costs and assume responsibility for any cost overruns. The financing will come via direct investments and debt financing, according to authority officials.

Goldman Sachs declined to comment on withdrawing its portion of the investment.

The lease negotiated in January included a rent abatement of up to $36.6 million, but a spokesman for the Port Authority couldn’t confirm whether the abatement was included in the new lease.

Meanwhile, the Port Authority will put $600 million toward the new 37-gate terminal building. The agency’s chunk of spending will include $200 million for the new Delta terminal, including the construction of new concourses and a pedestrian path; $185 million for a new electrical substation to support the building, as well as a 500-space expansion of the East Garage and temporary parking during construction; and $215 million for new roadways.

The airline will break ground on its new facility within the next month, and construction is expected to be complete in 2026.

“With the approval of Delta’s new lease at LaGuardia Airport, we are now looking forward to breaking ground on our historic state-of-the-art facility later this summer,” Delta Chief Executive Officer Ed Bastian said in press release from Gov. Andrew Cuomo’s office. “This is an important step forward for our customers and employees at one of our most important hubs and builds on years of Delta’s investment in New York.”

Delta’s new building is just one part of a state-backed plan to revamp the western half of LaGuardia, which President Donald Trump, former Vice President Joe Biden and many local politicians have called “a third-world airport.”

LaGuardia Gateway Partners, a state-backed consortium of six development and construction companies, is building a new Terminal B at an estimated cost of $4.2 billion. The partnership issued $2.5 billion in tax exempt bonds last year, and the bonds were highly sought after by investors, Commercial Observer reported in January.

Both Delta’s new terminal and the new Terminal B, which will be linked via a central hall, will be located closer to Grand Central Parkway than the current buildings.

The public-private partnership broke ground on Delta’s new central terminal in June 2016. The project also includes a new 3,200-space parking garage, retail and a hotel. Portions of the new complex are expected to open in 2018.

The governor is also pushing forward with plans for an AirTrain between Willets Point and LaGuardia. The Port Authority issued a request for proposals in February for an engineering firm to design three new stations and map the line’s route, CO reported.