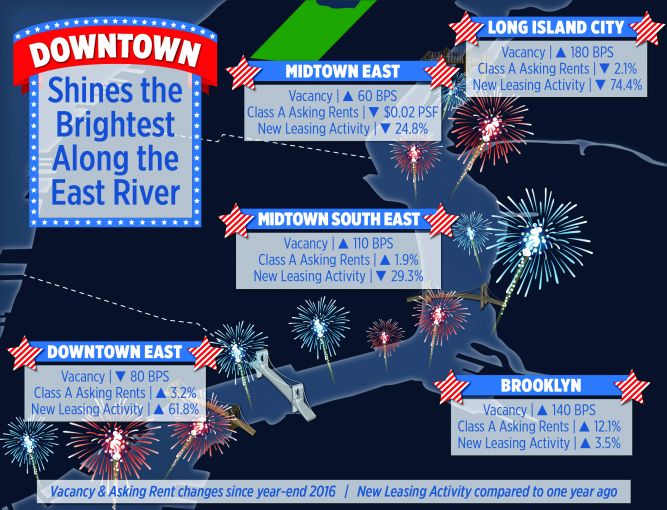 With the 41st annual Macy’s Fourth of July fireworks celebration upon us, let’s honor our nation’s birthday by analyzing the five major office markets that have the best views of the East River. The five markets will be ranked based on how much noise their midyear office statistics have made so far in 2017, and like most fireworks, the louder, the better! So, turn up your favorite patriotic song, grab an ice cold beverage and some barbecue and watch these office statistics light up the sky.

Long Island City: The market with the best views of the fireworks had a slow start to 2017. The vacancy rate has jumped 180 basis points since the end of 2016 to 10.6 percent. Leasing activity has been tepid this year with only 116,732 square feet of new leases signed, a 74.4 percent decline from one year ago. Class A asking rents dipped slightly, down 2.1 percent to $35.03 per square foot.

Midtown East (includes East Side/U.N., Murray Hill and Grand Central submarkets): Midtown East is the largest of the Fourth of July markets. Boosted by the 42.8-million-square-foot Grand Central submarket, this area totals over 78.6 million square feet. Vacancy in this market is up 60 basis points since year-end 2016 to 9.6 percent, while Class A asking rents remain flat, with a mere $0.02 decline to $71.53 per square foot. New leasing activity is down 24.8 percent compared with one year ago with only 1.9 million square feet signed.

Midtown South East (includes Madison/Union Square, Greenwich/Noho and Soho submarkets): Midtown South East vacancy is up 110 basis points to 6.9 percent but remains the lowest rate of the Fourth of July submarkets. Class A asking rents increased since year-end 2016, up 1.9 percent to $81.90 per square foot. New leasing activity is slow this year, down 29.3 percent from one year ago with only 1.2 million square feet leased.

Brooklyn: This market had a 140-basis-point vacancy rate increase to 12.9 percent, which can be mostly attributed to the completion of new office buildings. Leasing activity is 3.5 percent ahead of its pace from one year ago with 504,646 square feet of new leases. Class A asking rents got a boost from the new construction added to the inventory, up 12.1 percent since year-end 2016 to $57.58 per square foot.

Downtown East (includes City Hall, Insurance and Financial East submarkets): Downtown East made the loudest noise this year. It is the only Fourth of July market with a decline in the  vacancy rate, an increase in asking rents and strong leasing activity. Vacancy declined 80 basis points to 8.1 percent, which was mostly attributed to a 61.8 percent year-over-year increase in new leasing as 1.6 million square feet was leased. Class A asking rents have increased 3.2 percent from the end of 2016 to $59.47 per square foot.