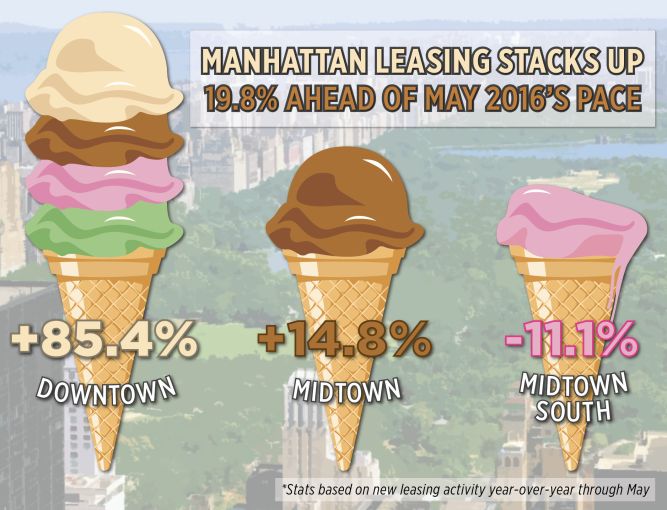 Like the heat wave we had last week, Manhattan new leasing activity is hot, hot, hot! In May, more than 3.4 million square feet of new office leases were signed, heating up the year-to-date total to 12.8 million square feet. Through the first five months of the year, an average of 2.6 million square feet of new leases were signed per month, on pace for the second-highest monthly average over the past 15 years. The highest monthly leasing total in more than three years propelled year-to-date new leasing 19.8 percent higher than one year ago. The increase in leasing this year was bolstered by new and expansion leases signed greater than 100,000 square feet, with four completed in May. This brings the year-to-date total to 13 leases, outpacing last year’s total of eight. And, since there’s no better treat for the heat than ice cream, let’s take a look at how each market stacked up.

Downtown had a strong start to the year, piling on new leasing activity 85.4 percent higher than one year ago, as 3 million square feet was leased year to date. Through May, Downtown’s leasing total has already surpassed the level through the third quarter of 2016. The increase in activity helped vacancy drop 140 basis points this year to 8.7 percent, the first time in over four years that vacancy dipped below 9 percent. The World Trade submarket accounted for 39.8 percent of square footage leased, as three of the large new leases occurred within the area.

Midtown South has cooled off this year, melting away with a decline in year-over-year leasing, down 11.1 percent with only 2.1 million square feet leased year to date. This is partially due to no new large leases signed. The lack of new leasing activity and an increase in available sublease supply pushed vacancy up this year, increasing 120 basis points to 7.8 percent.